The first film is called “Bad Girls Must Be Punished” (below). It stages two young schoolgirls who haven’t performed too well at College. Their teacher, a handsome man halfway between a lifeguard and a bodybuilder, is very disappointed. The girls play with their miniskirts and ask him if there’s anything they can do to recuperate their bad grades. The teacher tells the two spoiled brats they need to learn a good lesson in discipline. They smile at him with complicity but they are not getting the point, evidently. The teacher tells them they must repeat the year! End of the story.

“Devasted by the Plumber” (below) is another short where a lonely housewife wearing sexy lingerie as if it were the most natural outfit for everyday’s chores, calls the plumber to fix the washing machine. A black guy shows up and gives a quick glimpse at the lady. He knows how to fix the leak straight away. That’s a man’s job. The rest of the movie, quite interestingly,  concentrates on the nuts and bolts of hydraulic repairs, making it also a useful manual for household’s maintenance. At the end, the black guy presents the bill and that’s when the lady looks truly devastated. That’s not possible! Three hundred dollars to fix a leak?

“My Husband is a Lesbian” follows an intriguing plot: a married couple is spending their holidays at the beach. She’s a wannabe intellectual who, after reading Aristotle’s Theory of the Syllogism, tries to apply theory to practice. She speculates about her dull husband who, in the meantime, kills time watching younger babes on the beach. The wife’s lousy mumbling follows a crooked path: “Women who like women are lesbians. Women are human beings. Also men are human beings. Therefore, if my husby likes women, may be he’s a lesbian too…” This movie, of course, is aimed to people who like the Ingmar Bergman’s style.

(Three pictures below) : every BIG COCK SMALL PUSSY film comes in a luxury golden case, complete with authentication stamp and introductory booklet that makes it a collector’s must. Graphic design and illustration are by Carlo Muttoni and Monica Turlot, of the Brandpowder Team. 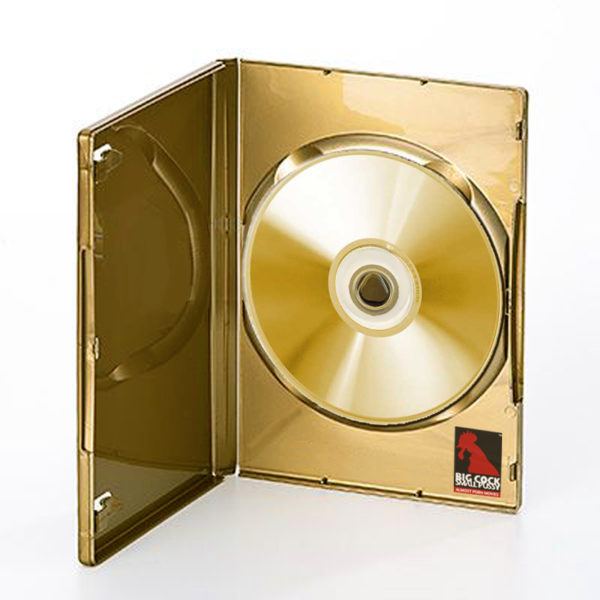 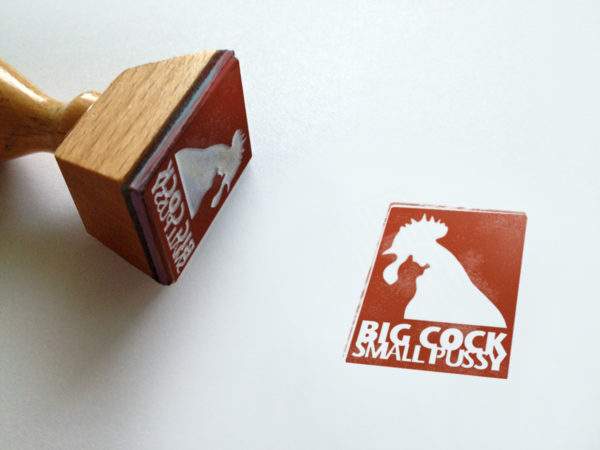 “The Overscrupulous Secretary” (below) stages a stunning girl whose humble job is mainly of the under-desk type. In fact she spends most of her working time picking up stuff her clumsy boss drops on the floor: pencils, pens, ipads… The boss is always on the phone, saying trivial things like: “You are doing a great job!” or “I want you to get it all!”. The secretary, in the end, re-surfaces with all the things she collected from the carpet, but we are not going to reveal the full story.

(Below): “So Innocent and So Dumb”, as you have already guessed, is an unnerving comedy about innocence and stupidity. A young country girl raised in a Midwest’s farm, receives a visit from her cousin, a young man from New York City (where else?). The city guy tries to take advantage of her purity but he won’t be able to get what he’s looking for. The farm girl raises his expectations when she asks him if he would like to see her little ass. He gets very excited. He doesn’t know, yet, he will go back to New York empty-handed.

Every BCSP movie is a disappointment to those who can’t wait to see the beef but, at the same time, a way to re-think ourselves, may be getting rid of our dependance on technology and the sluggish excitement of its visual drugs. The stories are very funny, anyways, and sometimes nothing is better than a good laugh. The Brandpowder Team is currently working – full steam – at new episodes and stories. BIG COCK SMALL PUSSY is opening soon a new, dedicated website where you’ll have access to all content and gadgets. Stay tuned!

as you already know, brandpowder’s products are aimed to a niche.
You have to see one of our movies, anyway. Would you like to stage in one? Casting is opening next week in Toronto. Let us know.

Chris lawreply
– In reply to: carlo

what an incredible coincidence, by some universal shifting of spiritual tectonic plates I will be in Toronto next week. I did try to watch one of your videos last night, to make sure I was making an informed decision as to whether I agreed with your point of view. I woke up in a heap on the sofa, toilet paper still unfurled and jeans tightly fastened. One could argue that this is a great product for men of the cloth! and should be widely welcomed by their respective institutional headquarters. I am both really excited and stimulated by the career opportunity to finally be rich and famous and to be the clergy’s biggest fan.

carloreply
– In reply to: Chris law

After a brief consultation, the BT decided you are eligible for a career as an actor on BCSP movies. If it’s okay with you, your artist’s name will be Sponge Knob. John Krug, our director, will be waiting for you in Toronto to shoot the new episode: Underwater Heat.

Thank you for your kind support and wit.

Chris Law
– In reply to: carlo

Thankyou so much I can hardly contain my fountain of gratitude. Please can I request my middle name to be included as my father is a palaeontologist. it is Clitaurus. Yours ever kindly Sponge knob.

carlo
– In reply to: Chris Law

Ca va sans dire, dear Sponge Knob. The movie will be a Hit!

BCSP movies will be soon available at your nearest brandpowder shop.

Thanks BT. I am an old guy not used to technology….so i went to my local DVD rental store and with my surprise I found all the movies…in their golden case…went home but then the big disappointment : all in original russian with korean subtitle and I count not understand a word on how you fix a leak…fortunately I had 30 days policy and i changed them all with “Quel gran pezzo dell’Ubalda tutta nuda e tutta calda’….where despite the usual and despicable naked scenes I could clearly see how a Pozzi Ginori bidet is used for. Thank you.

You mean Moana Pozzi Ginori? 🙂
Thanks for your fabulous insight on Italian pop culture.

The Rreply
– In reply to: carlo

thanks BT..yes my English is not good I meant Moana Pozzi’s Ginori