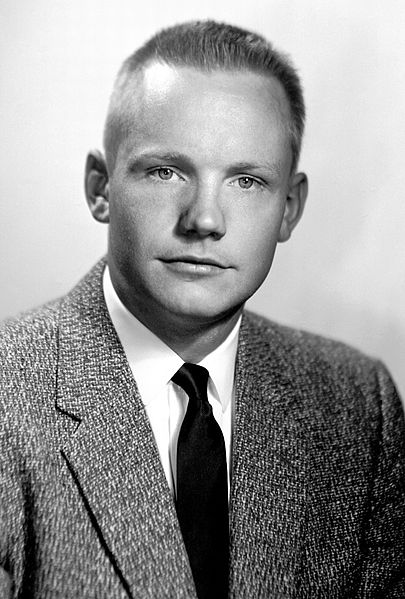 Neil Armstrong has left the planet, once more. This time for a one-way journey to a place, somewhere in outer space, where he belongs in every respect. It’s difficult to separate his life from the myth of the greatest of all adventures. Neil may be considered a hero but we are sure he wouldn’t have liked this definition. Still, he is the man who started, on behalf of everybody else, the exploration of other worlds. Barely 21, Neil was already in Korea, serving as a fighter pilot; he took off from a sea carrier 80 times on different missions. He graduated from Purdue University as an aerospace engineer, got a Master Degree in Aeronautics from the University of Southern California and, before being selected as an astronaut by Nasa, he worked at the Dryden Flight Research Center as a test pilot, flying on the Bell x-1, X-15 and several other rocket prototypes and experimental aircrafts. Two weeks before turning 39, he was the first man to set foot on the Moon. What a life history!

We would like to remember him as the best pilot and astronaut in the history of the United States. Not only for his courage, extraordinary skills and intelligence, but most of all for his humble personality. He flew higher than anybody else, always keeping a low profile. Even when he landed on the Moon, back to that July the 20th, 1969, his feet were firm on the ground. He refused to talk to journalists, he didn’t sign autographs, he declined political offers and didn’t even write a book (even if there is an authorized biography).

At the moment of take off aboard the Saturn V, considered by every astronaut of the Apollo program as the scariest moment of all, his heartbeat didn’t go over 100. Traveling to the Moon keeping the right trajectory was like hitting a fly’s eye with a pin from a distance of 3 miles. Armstrong, along with Collins and Aldrin, calculated the right path with a sextant and a computer smaller than a Commodore 64. He always kept it cool even in the direst situation, always doing the right thing at the right time. He didn’t talk too much and his quietness was almost embarassing, at times. Neil’s  heart stopped yesterday, August the 25th.

May his spotless conduct and virtue be an example to present and future generations. In a moment where movie stars, pop stars, sport stars and many other instant celebrities think that life is a show, Neil’s small step is there to demonstrate all of us Modesty always shines brighter than any Ego. But now lets’ all look up to the sky! The Moon is weeping, tonight.

(images and footage, courtesy of Nasa archives and Wikipedia).

Dear BT I plaude your words . One humble man delivered the biggest show over the last 40 years (by far the moon conquer remains the biggest accomplishment by the man in recent history), while now many humble shows are delivered by, thought to be, big stars. Let’s not forget that behind him, there was a great leader who set the journey for Apollo 11, by declaring in 1963 that by the end of that decade, United Staes of America would have been landing a man on the moon and safely brought him back to earth. Vision, bold statement and rentless execution to inspire, drive and deliver. A scaring compare with today visionless leadership and frozen action that we are witnessing in Europe.

We couldn’t agree more on your point. Thank you for your comment.