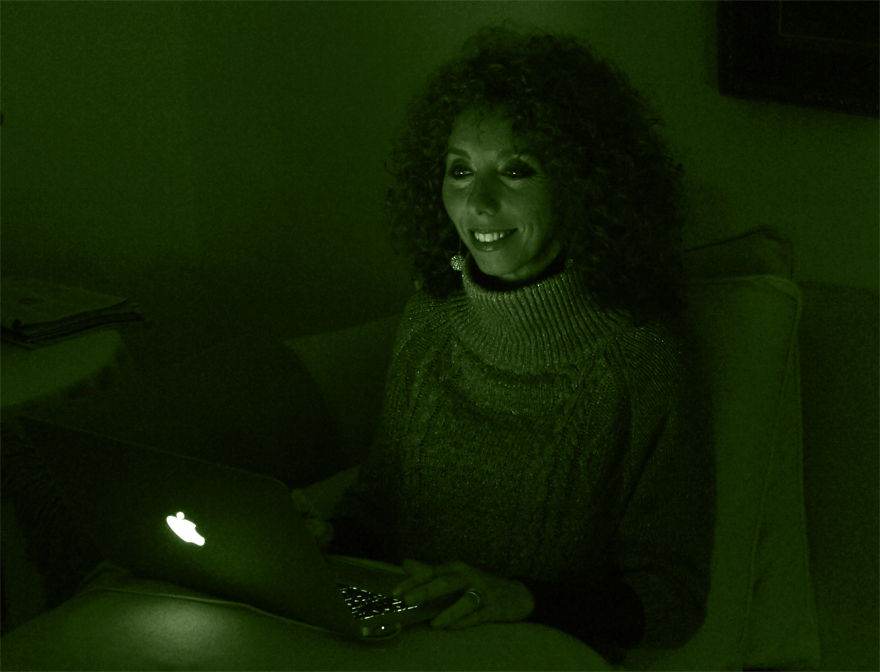 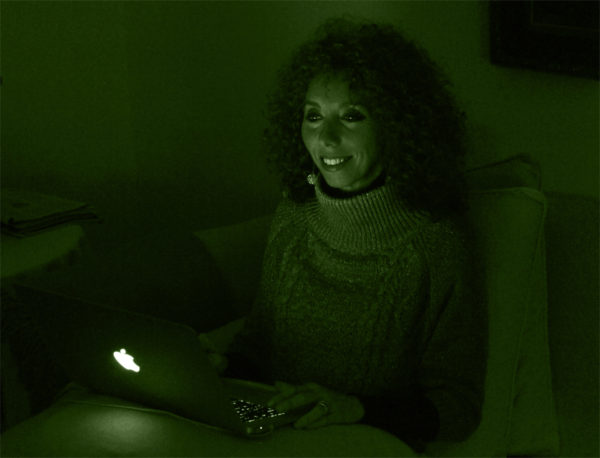 Drones are usually associated to pilotless aircrafts operated by remote control. The US Army has recently invested 23 billion dollars in new drone crafts, and these figures are going to rise exponentially in the near future. While modern warfare enters the Gloomy Era of Destroying Robots, there is somebody who is flying in the opposite direction, choosing Life, instead. We are talking of Sissi Dinbear, an italian scientist with a Biology Degree from Turin University and a PhD in Robotics Engineering at WPI. Mrs Dinbear, better known as Lady Bee, developed a swarm of robotic bees that are just out of a science fiction book. 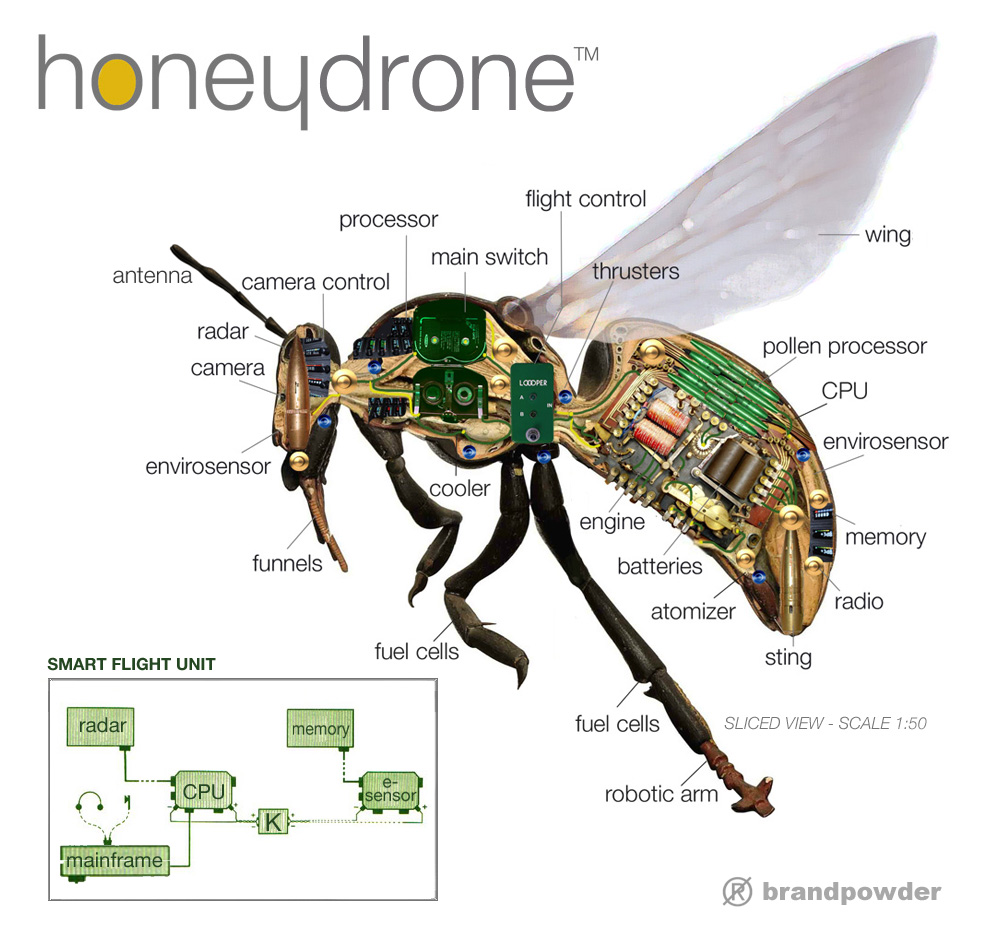 Above: the sliced view of the dronebee and its sophisticated machanisms (courtesy of the author). Opening picture: When at home, Sissi likes to bring the outdoor in. Her office is dimly lit by green solar-powered leds. “I like to think my office as a summer firefly field,” she says. 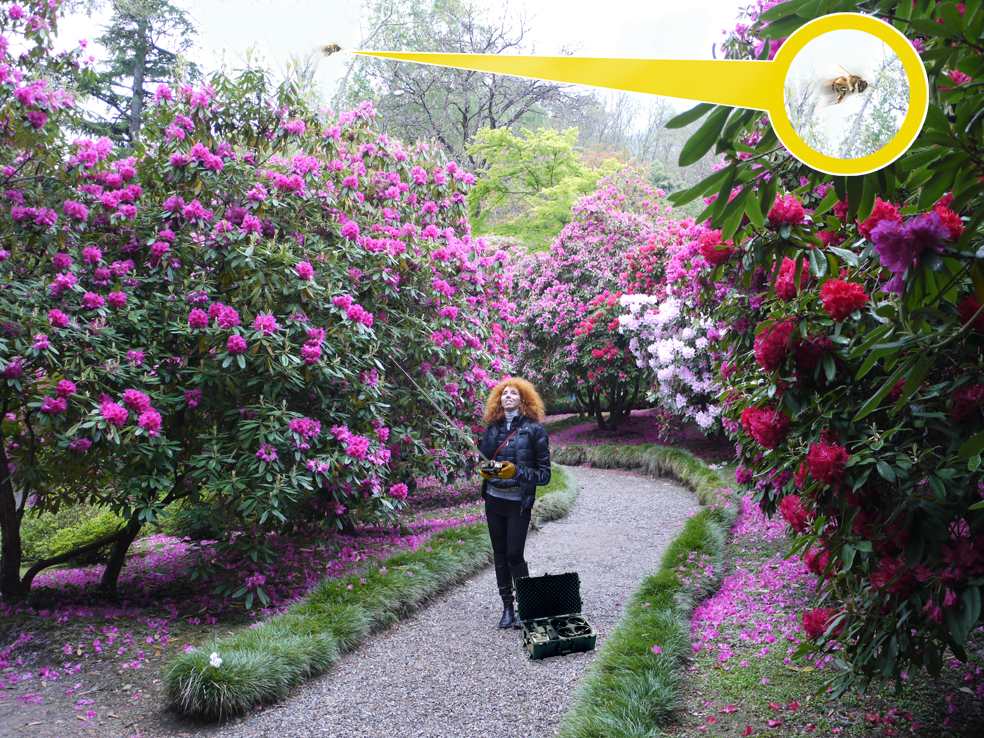 Above: Sissi testing the flight of a new honeydrone. “I live in Eden,” she says. “I spend 50% of my time in the garden, programming the flight patterns for my little friends. I teach them a sort of waggle dance, so that they can instruct other bees on where to find the nectar. The process is self-replicating. Bees are social animals, you know. And my honeydrones behave like real bees.” 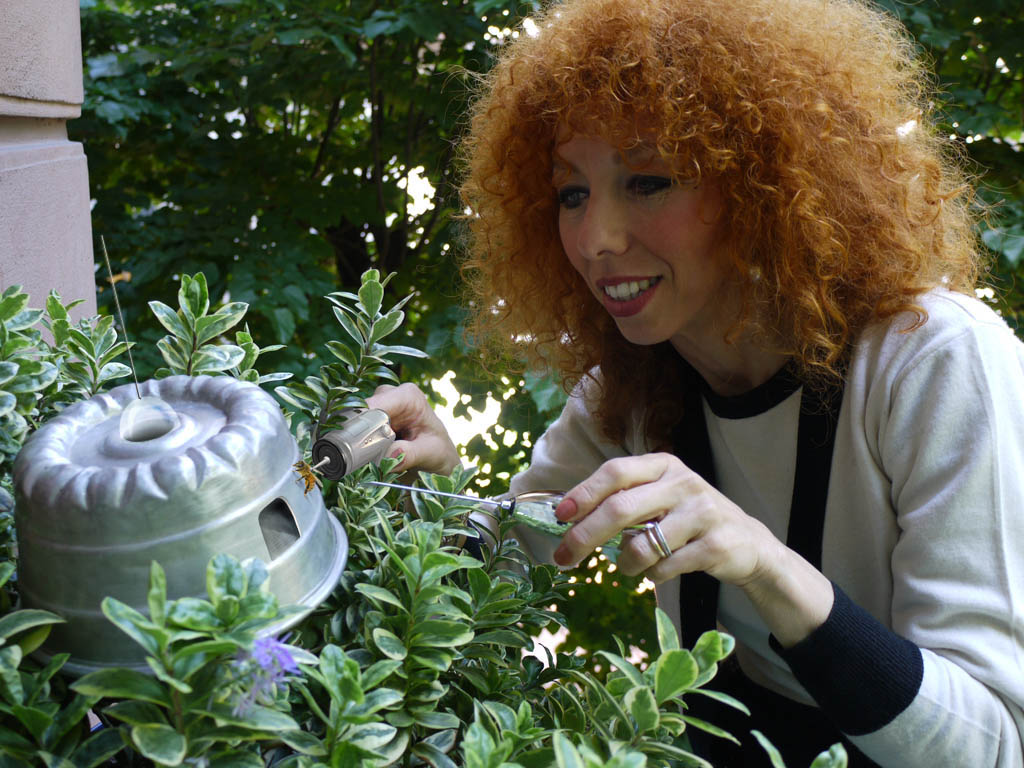 Above: Sissi is checking a honeydrone’s CPU and flight mechanism with a Quick Bee-Tester. “My devices have no need for plug-ins or connecting cables. It’s all bluetooth, of course, and every bit of info is instantly transferred to my personal data-beese.”

Below: detail of a honeydrone at work. Note the green antennas, produced by JPL with aerospace tubular nano-technology. They can detect a flower a mile away, and find the way back even 50 miles from home. Compound eyes and microprocessors are made in Taiwan by Narl, based on Sissi’s design and specs. 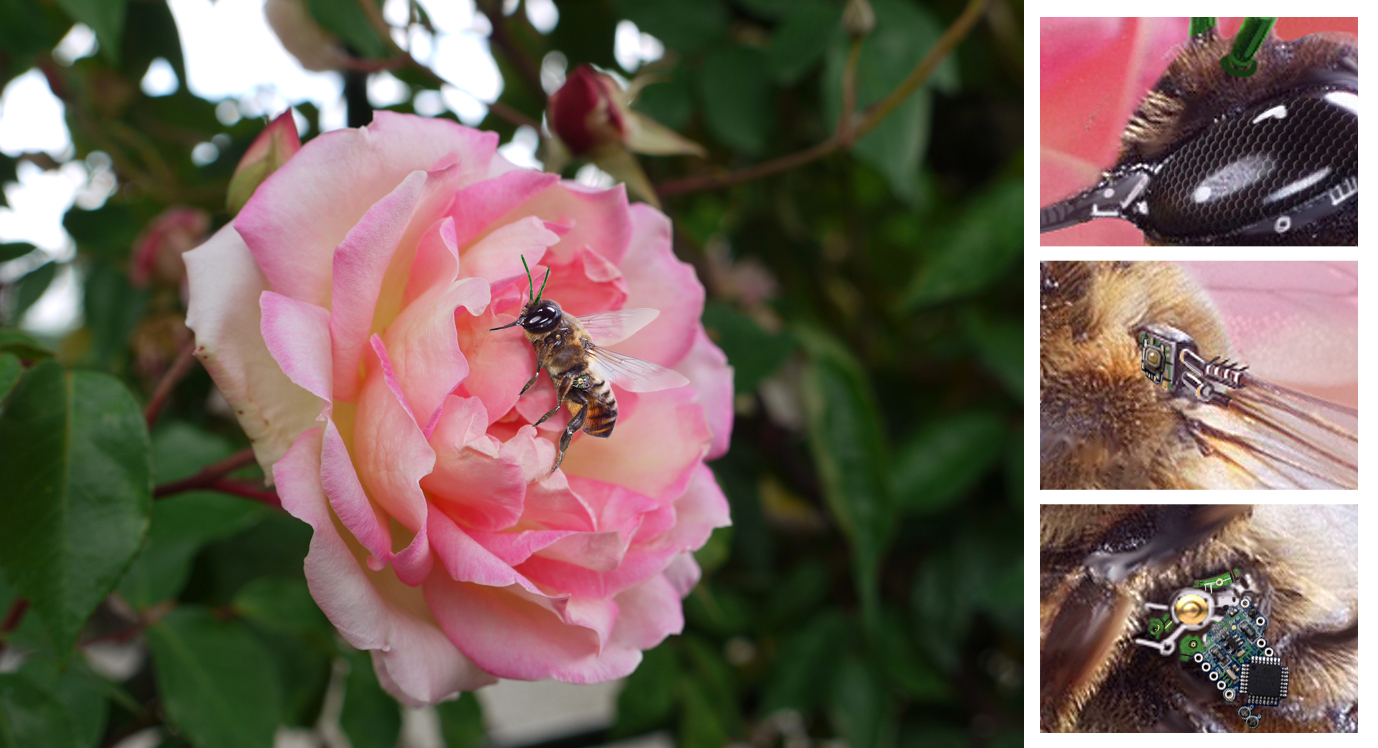 The honeydrones are able to fly, suck nectar from flowers and produce real honey, more or less like a real bee. They learn flight patterns and memorize it, so that they can stay out for hours and come back to the beehive safely. They can produce 5 times the amount of honey of a normal bee and can work for a full day with no need of extra power supply, since batteries recharge directly from sunlight thanks to policrystalline photovoltaic wings. 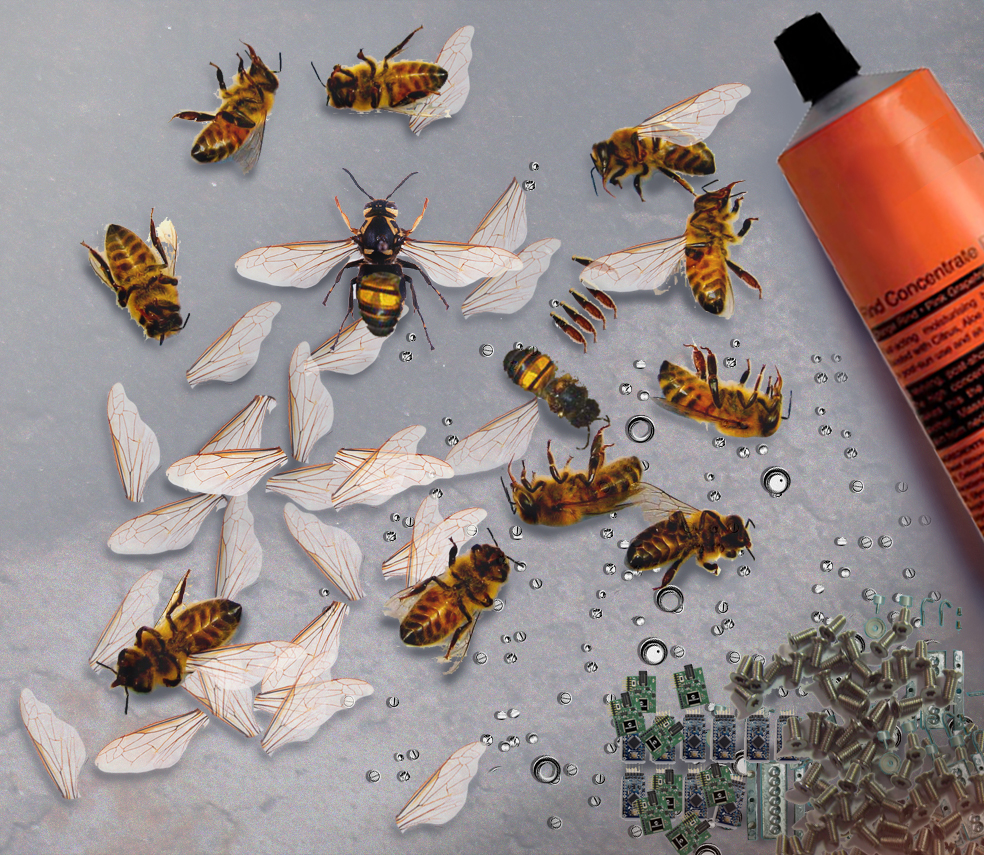 Above: spare parts and microchips. Production of a honeydrone costs a lot of money, that’s why many flight tests are performed by mock ups stripped by all the expensive devices. Sissi told us her first honeydrone took her five years of non-stop work and half a million dollars. Several Universities are now supporting the project. “Bees are dying everywhere in the world,” she says. “We can’t explain why this happens but if the process continues, by 2040 we’ll all be dead. Bees are fundamental for the ecosystem. Thanks to impollination, we obtain crops, fruits, wood, fuel, clothes and many other vital things. Bees, not dogs, should be considered our best friends.” 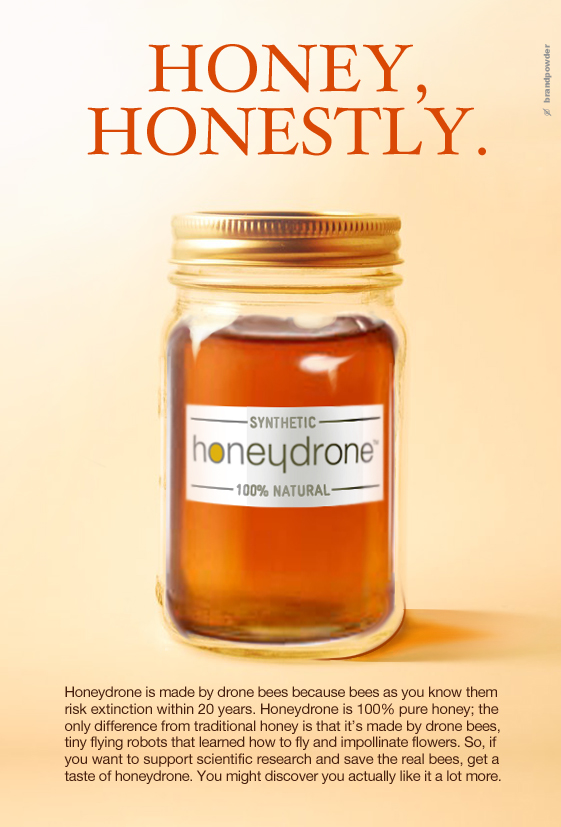 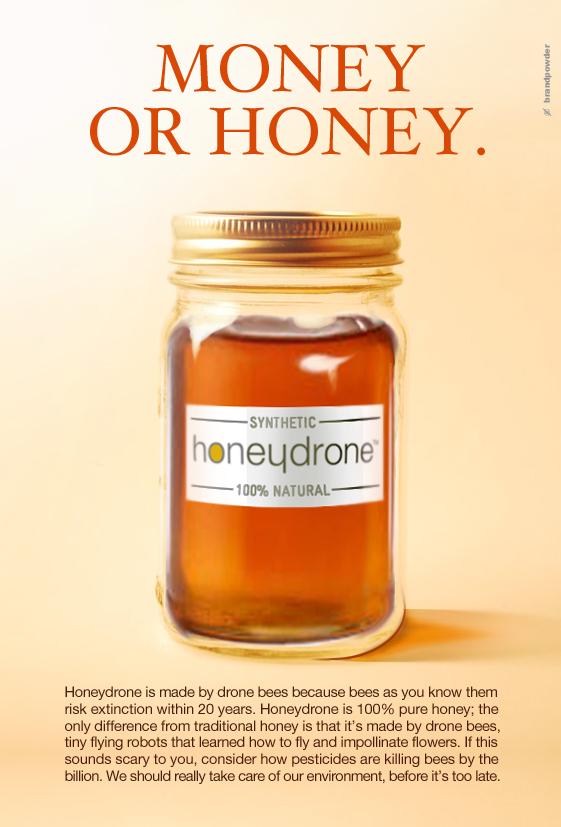 Brandpowder developed a campaign for Honeydrone (above) and a worldwide corporate program to help Sissi to scale up her business through Institutions and Governments. “It’s crazy to think so much money is wasted on bloody wars every year, while vital projects get only a few pennies, if you are lucky,” laments Sissi. “Humans are a bunch of self-destructive idiots. We have a lot to learn from these little insects.” 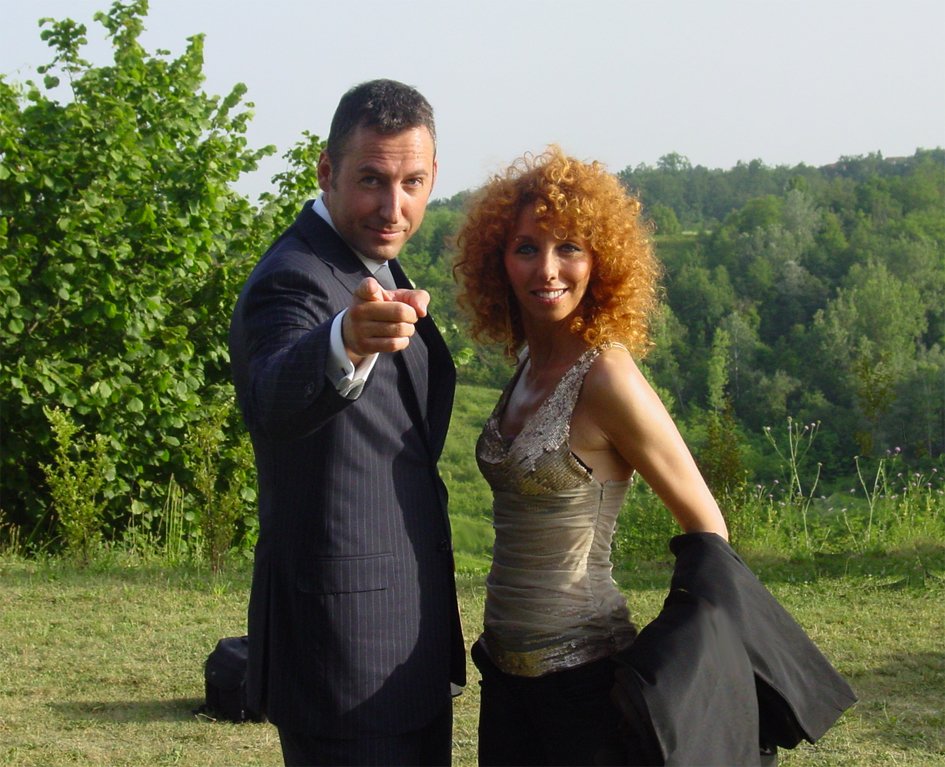 Lady Bee and Frank Delano (Brandpowder’s P.R. executive) strike a pose for our photographer at the fund-raising Honeydrone Party held at the Meierholz Zurich Park, on May 26th. 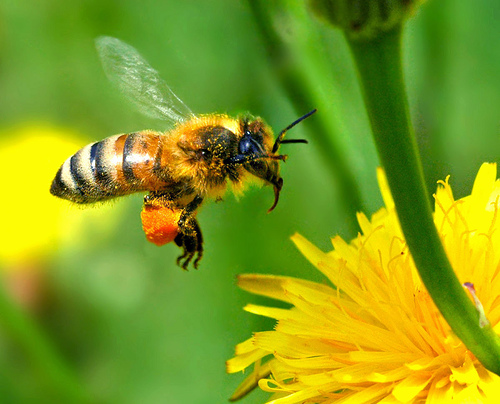 The next dodo? Honeydrone is fighting to save these little furry sweet animals. Below: a short film courtesy of TED Talks / Louie Schwartzberg ©. Pay close attention to his words.

Now if they could only be trained to attack enemy camps in Afghanistan they could get some very sweet funding.

Lady Bee read your comment and blushed. She said: thank you. As for the killer bees, the US Army is already developing micro drones for aerial attack. The funny thing some Intelligence (who wants to remain strictly anonymous) already tried to hire Sissi for her know-how on incremental learning software and the understanding of ultra-light batteries applied to self sufficient mechanisms. She said: no, thank you.

Hi Chris,
thanks. We’ll make sure to follow your advise.

Actually, about the Intelligence asking the help … one here would surely go and see what are they talking about, as all the know how they will get from whatever sources, completely anyways one can imagine,
so why not from the source – at least source then can get in return some neat extra information whats up with this people, and perhaps.. perhaps.. Sissi can give some mind memes and eye opening ideas to them about what for it can be used and what for they can use their tools, and … hey, why not while we are on it – what for are We here

– it might sound kind of socking but many people in intelligence community have not gone through some eye opening schools about life with what they fighting, have not had lots of kind loving people around showing the way and hey, hear many of them are strangers to psychedelia and even to one of these marijuana cigarettes, that lots of us talking about in these days, no wonder they are still coming up with some weird ideas like how to kill more effisantly instead how to be more effisiant, in this Life, that some of us look like a Ride, some of us look it like Trial. Some.. just fallows the sings given from the ones that boor devil is trained to fallow as truth and way to the freedom, or something along these lines, sad story anyways..
Surely the Head Justice (in case life is interactive Trial from above), would not delighted and kind with sentence for the one who works hard to blow up the bosses Work. Might be slightly off here but perhaps not to much

Point short is… i would go with these intelligent guys (that will come around ya (means people who do cool stuff) again and again) – and all of us, would have responsibly to go with them, pack of weed (or good open direct advice) with us, do not hold back with Words, use chances that what for they are send to ya – what will they do, arrest you for offering eye opening advice about life?
Besides, they assume ya to be a bit nuts anyways, so (am i ranting here already?) so play with it.

Well.. so much about short comment that was planned…

Thank you Margus for your witty comment,
we are definitely with you: some people should get more love to open their heart and definitely more drugs to open their mind.
Best from all of us.
The Brandpowder Team

I love you my LORD. Allah

thank you Muhammad for your love note.

Awesome dedication here. I can only imagine the amount of work you have put into this. You are a true scientist, keep up the amazing work!

Do they make wax? I love wax and at delicate age
76 I am researching possible products
Bees are crucial animals I love them…but not keen on their stings….but it comes with the territory

brandpowderreply
– In reply to: Marjorie

These bees do not produce any natural wax. We share your love for these beautiful animals, too.
Their stings are part of the way bees defend the hive, at the cost of their lives. May we suggest
a beautiful book? The Bees by Laline Paull.

Great effort. Appreciate. Normal bees aren’t just pick the honey from flowers and store in beehive but it do some kind of conversation inside its body and finally the tasty honey will come to beehive. Do this honey drone will do this?

brandpowderreply
– In reply to: Vignesh

Please explain The honeydrone label…Synthetic…100% natural??
I also note that the drome was created in 2012? why is it not everywhere now?

brandpowderreply
– In reply to: Robert

Lady Bee drones have been sold in USA, Canada, Mexico, Argentina, Europe and China, so far. People barely distinguish them from a normal bee. They are synthetic (man made with artifice: geo-engineering and cybernetic technology) but perfectly natural in their behavior and performance. Kind Regards. The Brandpowder Team