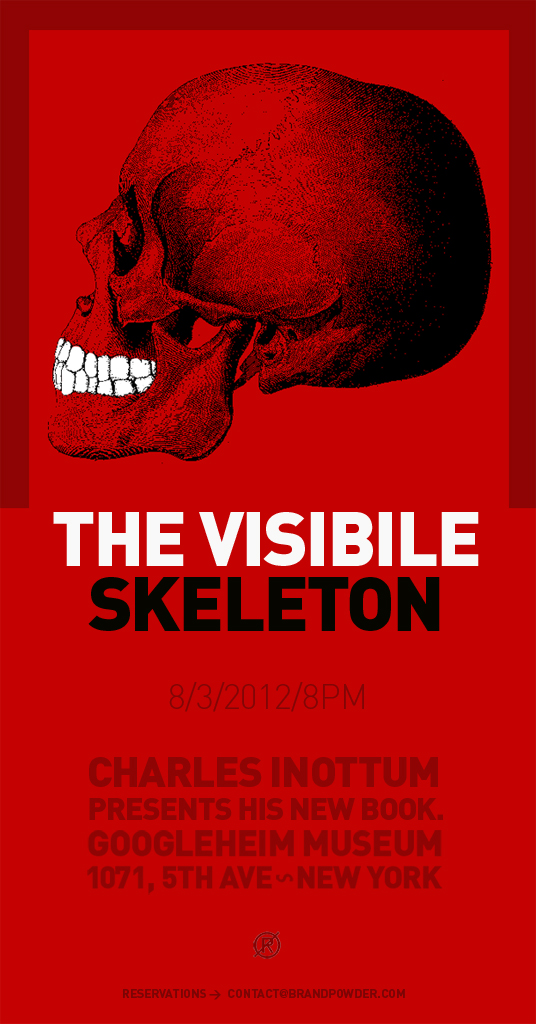 Charles Inottum has been studying bones all his life. The topic is unusual and interesting, but what makes it also intriguing is the fact Mr. Inottum is not a scientist but a philosopher. His almost naive dedication to the subject unearthed some controversial and, sometimes, creepy theories.  The bone-white brilliance of his reasoning, so far, has only been balanced by the obscurity of his persona. Most of his books are still unknown or unpublished. Which is a pity, given the originality of his ideas and the extravagant, random poetry of his writing. So, when Mr. Inottum showed up at the Brandpowder Studios asking for help, we truly did our best to promote his work.

Opening picture (top): Poster for the premiere of “The Visibile Skeleton”, an essay on the multiple metaphors of teeth: in the foreword the author suggests that “every time we smile, the only visible part of our skeleton comes to surface. Teeth are the epiphany of death and there is nothing to laugh about it.  At ancestral level, back to the primordial  night, man was certainly more hunted than hunter. The moonlighted teeth coming out of darkenss represented the fear of the wild beast, its power to inflict death by tearing human flesh apart.”

Below: “At The Roots of Laughter and Pain”. In this book Mr. Inottum speculates about the ambiguity of joy and sorrow saying that, at the very bottom, they are the same thing. Teeth are, again, central to his theories. He compares them to “enamel trees building a fence around the lying tongue, placing tenacious roots into the bed rock of blabbering jaws.” 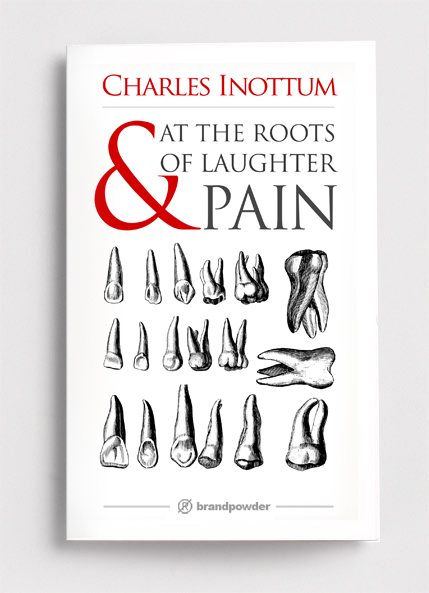 “Fight, Feed, Fuck” is perhaps the most controversial book by Charles Inottum. The idea, here, is that the body can be imagined in three sections, or Mouths. Each one is specialised in one activity, indispensable for our survival. The three “F”s represent our need to Fight, to Feed (ourselves and our offspring) and to Fuck (for reproduction). We suggested the author to change this last word, a bit too graphic in our opinion, but he insisted to keep it: “it helps people to fix the concept”. The original work included also a section dedicated to Fugue, another key element for survival. Fugue, allegedly, is associated with the anus, which is a back-mouth. This explains why animals, before running for their life, literally  empty their bowels in order to be lighter and faster. The way of saying “I’m shitting in my pants” is also a reminder of this biological trick. 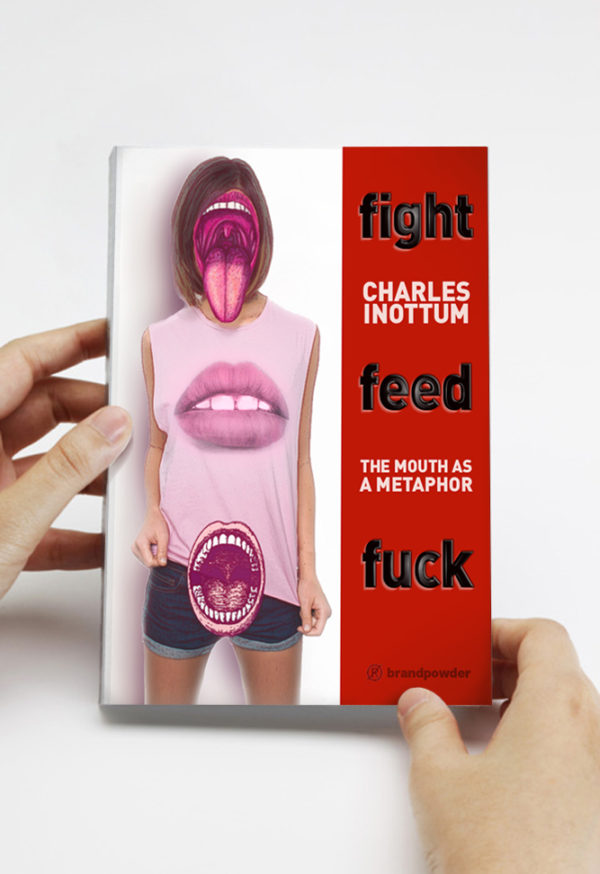 Below: concealed weapons. Charles Inottum speaks often of  “latent aggressivity” as a natural and permanent state of mind of human beings. We think we are civilized and in control of our emotions but, at the very bottom, we are wolves disguised as sheep. 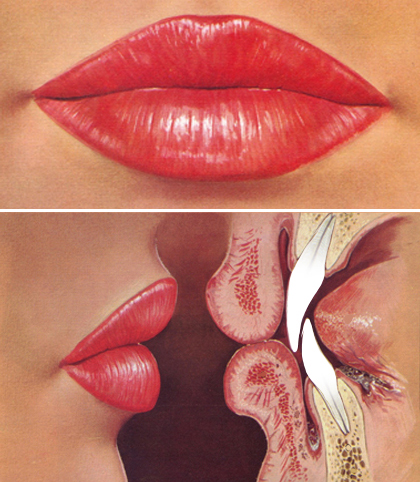 COMING SOON:  “Sex and Bones”.  Charles Inottum’s new book, due to come out next January, starts with a provocation: how about if we look at lingerie as an extra layer of bones? Isn’t it an exoskeleton, after all? The author argues that female seduction, as a strategy, finds in lingerie not precisely a weapon but an elegant self defense. In other words: every piece of corsetry mimicks the inner skeleton (corsets were made of whalebones). We asked Mr. Inottum why should we be allured by such scary symbol, and he told us men are attracted by danger and fear. Lingerie, to him, is not a playful, sexy thing. It is imago mortis.

Below: The way of saying “dressed to kill” is revealing for Mr. Inottum. Behind every courtship leading to carnal knowledge there is an intricate world of symbols. White lingerie is linked to the bone. And probably to the boner. 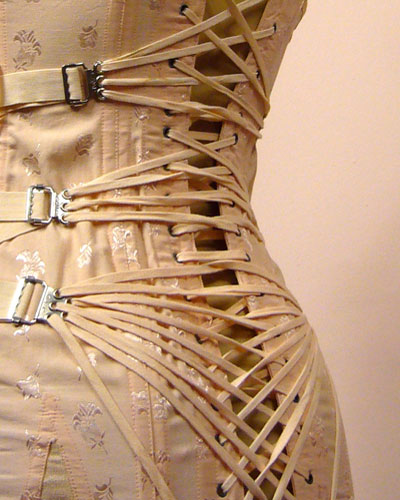 Above: this bustier is reproducing the interwoven complexity of tendons, muscles and bones. Inottum thinks the visible skeleton is a haunting presence, and he wonders why people refuse to see such evidence.

Below: Skin Deep? This tattoo tries to get underneath. But alas! – says Inottum – the exploration is not exactly reaching the inner body but only a scientific representation of it. Probably this is an unconscious, failed attempt to open up and reveal what’s inside. 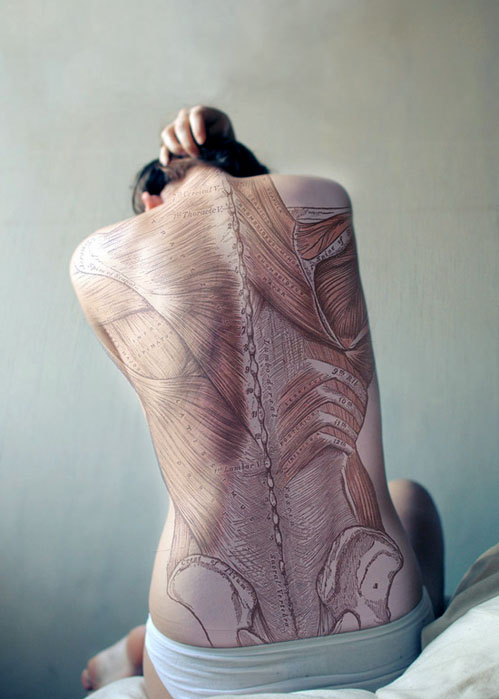 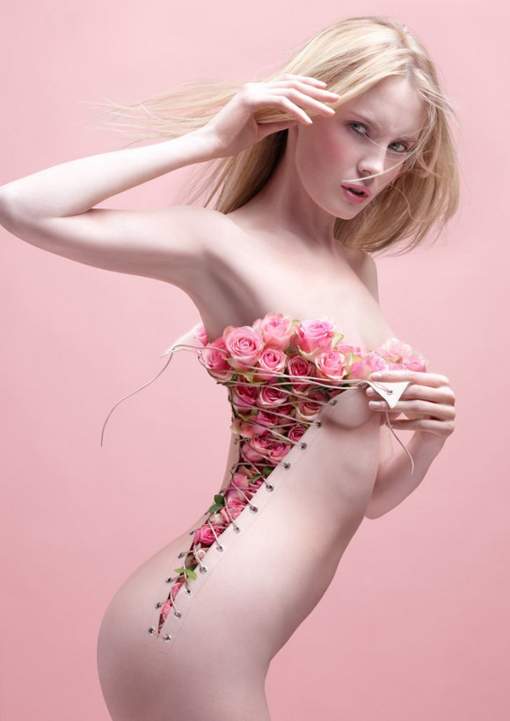 Above: “Rose” by Christophe Gilbert. Once again, according to Mr. Inottum, the flesh is a thin coat of paint, a fragile membrane that barely holds us together. The body is filled with flowers, an unconscious allusion to antique embalming. 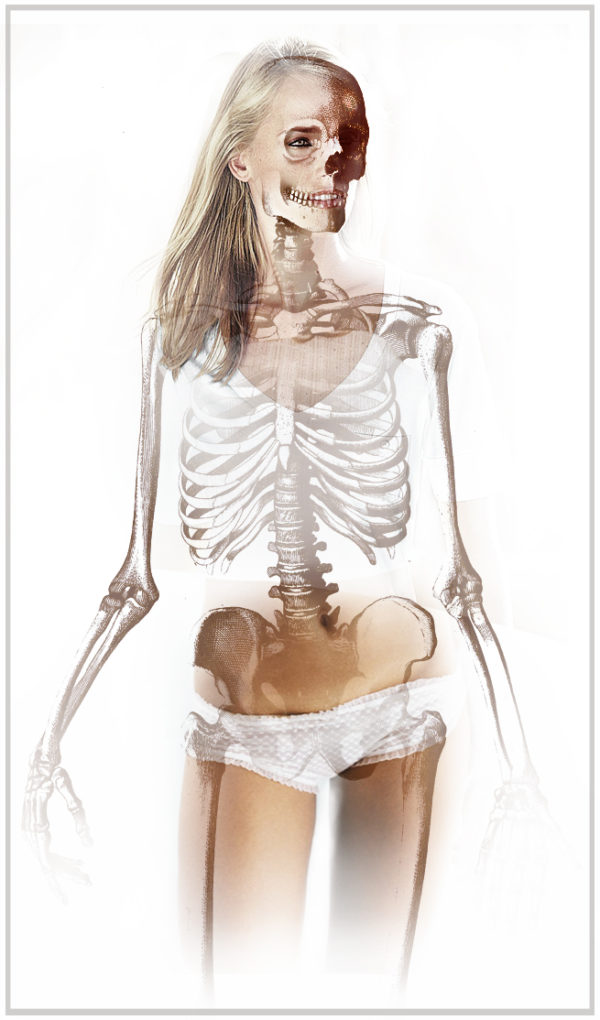 Above:  Dissolving Beauty. In this case, the skeleton becomes the ornament. 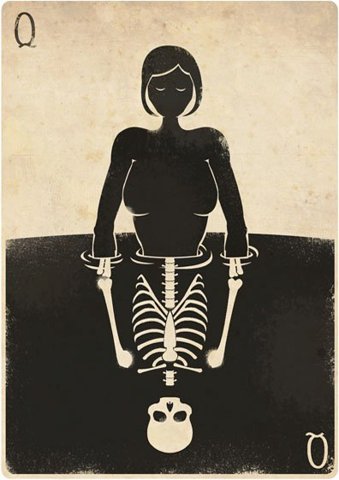 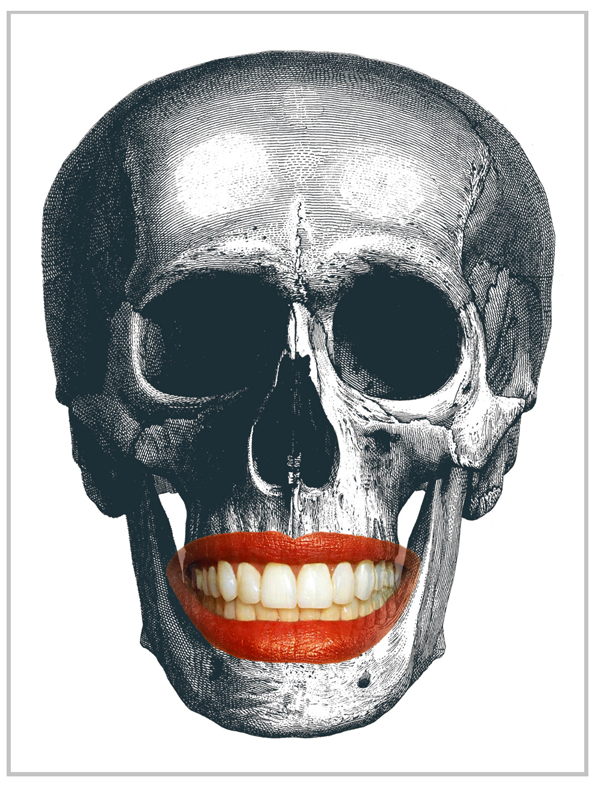 Above: teeth are the hardest and most durable part of our body, a mixture of dentine and enamel. To anthropologists in the distant future – Mr. Inottum says –  a molar will provide all sort of information about the way we lived and loved.

According to the author, moose’s bones are the living proof that horns and teeth are strictly connected. Their evolution is linked, again, to the three “F”s theory. 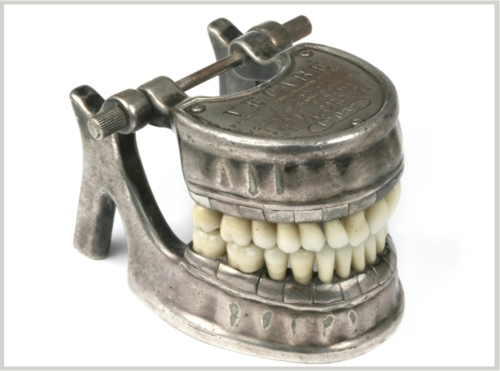 Above and Below: Mechanical and Make up. The mouth opens to a whole range of interpretations and Inottum, like an enthusiastic writer-dentist, can’t wait to plunge into deep analysis, coming out with always unexpected answers. 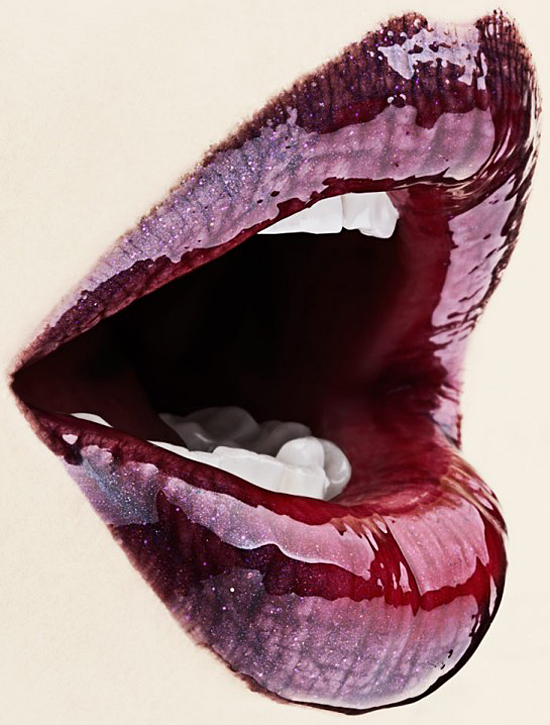 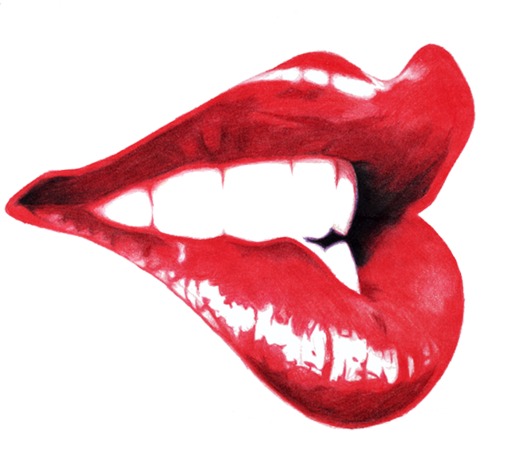 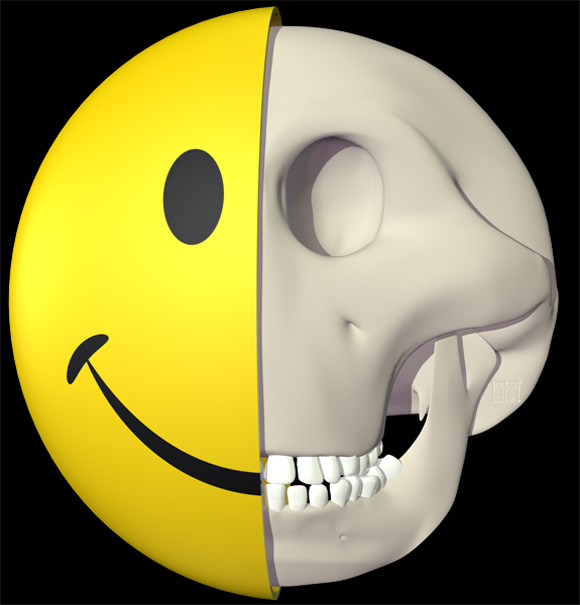 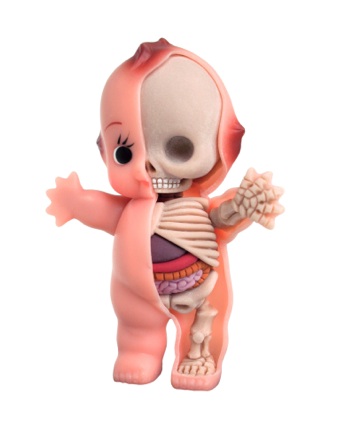 Above: two images by Jason Freeny. The artist creates hilarious supporting structures inside objects, characters and everyday’s icons. The Empty Society, according to Charles Inottum, digs into the void, desperately seeking for a soul.  What we are left with, in the end, is just a smiling skeleton, a handful of bones.

Below: the way of saying “are you nuts?” is well interpreted by this sweet treat (or trick?). The similarity between brains and walnuts – Inottum explains – is not coincidence, but a clear sign of a vegetative state of mind. 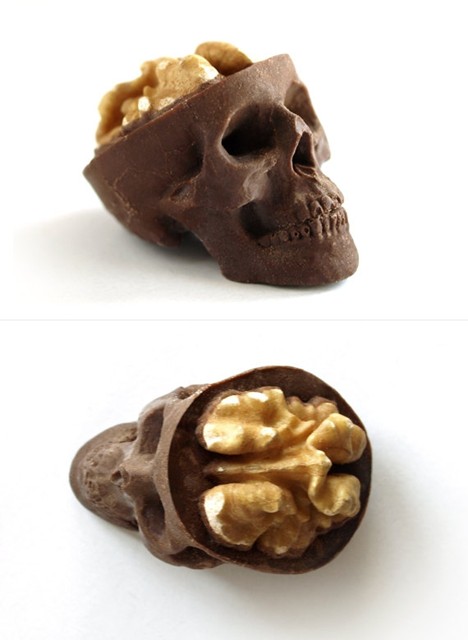 Interesting ….I am wondering as a dentist what should I do next. Your insight open up an entire new world for us and I am discovering that my competitive field is not anymore against other dentists but rather going after gynaecologists. Good news : the scenery will change and from rivers of saliva we will contemplate woods and crevass …thank you BT to show us the way.

carloreply
– In reply to: The Running FFF

we are happy to know you are extending your profession to new fields.

Dentistry and implicit sex, what an interesting combination to spread an insightful message. Far better than those sex sells advertising in fashion industry. This really stimulates human imagination to a whole new level.

carloreply
– In reply to: Brandson Koh

We appreciate your comment. It made us discover hidden things we didn’t even consider in first place. Charles Inottum is a genius.