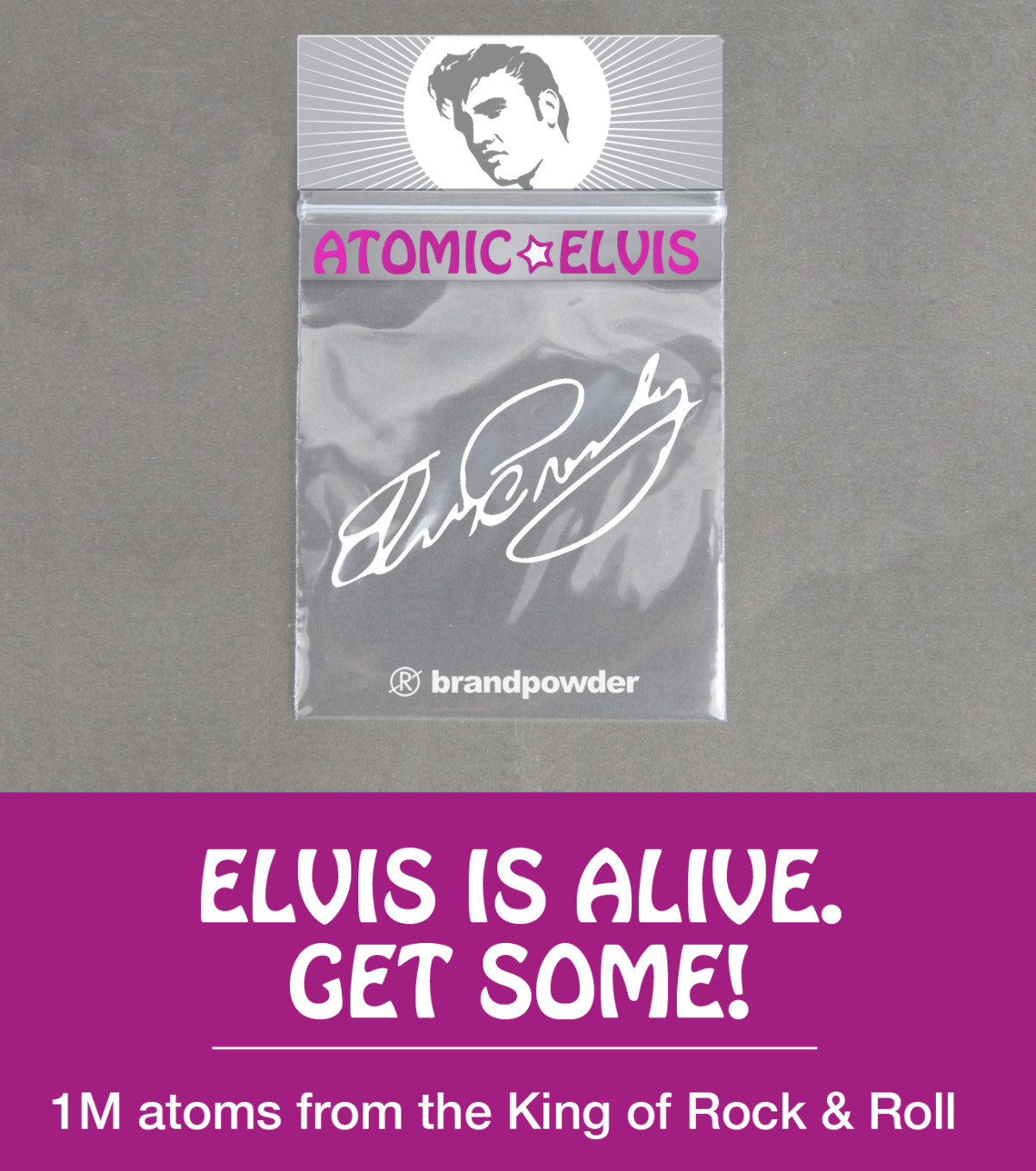 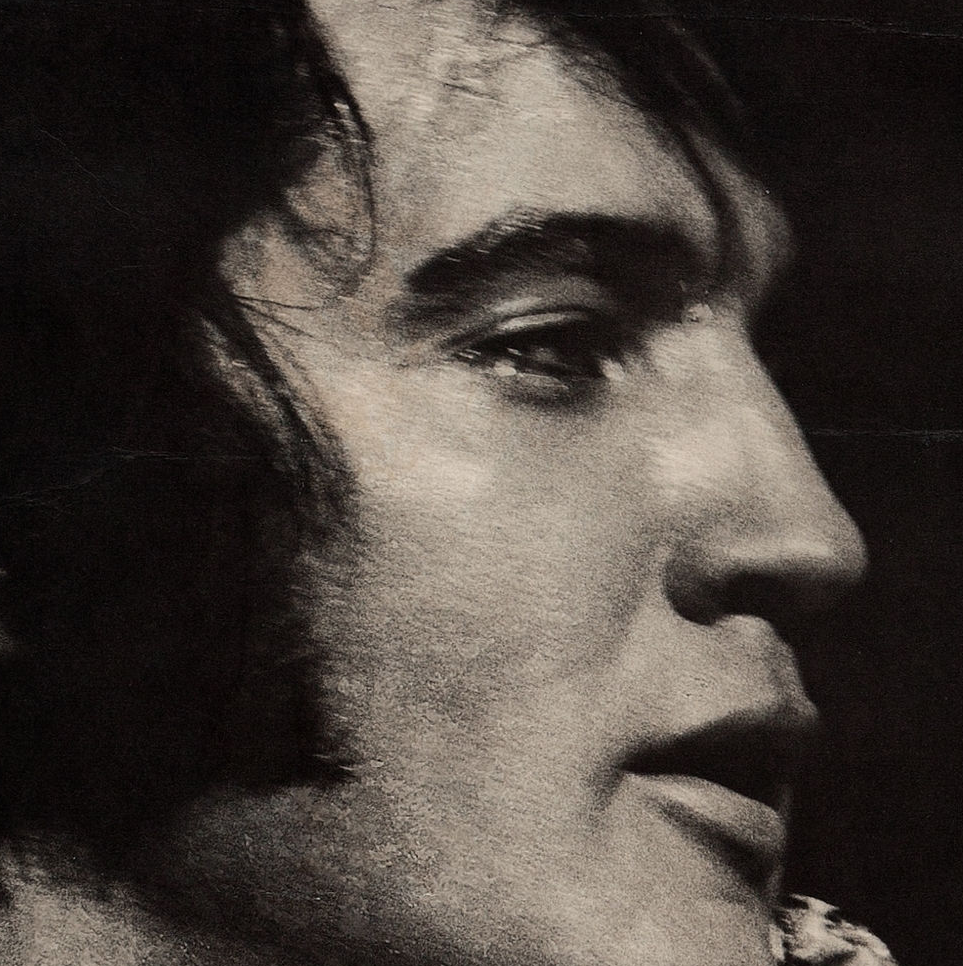 HOW MANY TIMES did we read that? – the same line, again and again, printed on tabloids and online blogs. We all love this kind of bullshit, don’t we? It’s part of today’s mythology, after all. We want to believe that Elvis is alive because rock stars have replaced old gods. The word “cult” is applied more to pop than religion. People worship Elvis as an immortal hero, a Jesus of Rock & Roll. People worship his guitars, smelly boots and tacky jewelry, too: a wealthy collector of Elvis memorabilia recently forked out 60,000 dollars to buy his American Express Card. Graceland’s fetish, no less! 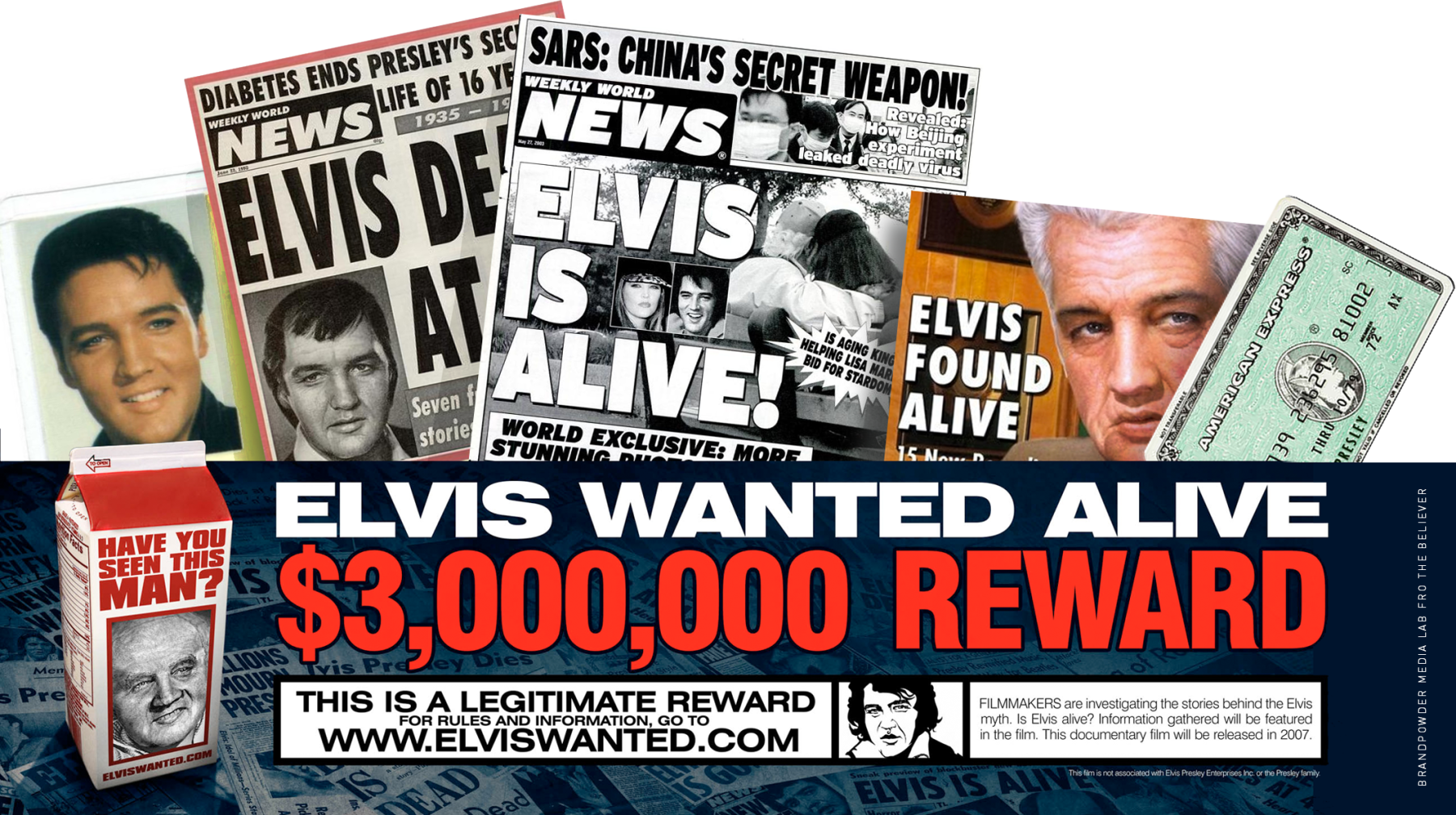 But here we come with the good news!

Brandpowder – like all of you – loves Elvis to bits. So, about two years ago, we decided it was time to do something special for him. Something to bring Elvis to life. no less! Our Team, since then, worked along with I.A.M.S., the Institute of Atomic and Molecular Science in Tokyo. Thanks to his founder, To-Nin-Zu, and his brilliant pool of experts, we developed a new technology called APR, which stands for ‘Atomic Parallel Recognition’. We are going to explain, in a few words, how the system works and why Brandpowder may run for the next Nobel Prize.

THE ORIGINS: The idea of the project came from a simple question: What happens when we die?  We all know 70% of our body is made of water. So, it just evaporates, and the rest turns to ashes. But where do all our atoms go? They can’t just disappear. Our body is made out of a staggering 7,000,000,000,000,000,000,000,000,000 atoms: oxygen, carbon and hydrogen, primarily. And since atoms are indestructible, we can safely affirm our remains, after we die, keep living in other forms. They hang around the Universe, so to speak.

THE TECHNOLOGY: APR is a digital tracking system.  Its aim is to look for atoms that respond to a predetermined pattern. Think of it as a dog who learn to find truffles after smelling one, first. APR can find atoms of a certain person after you upload the machine with the atomic sample belonging to that person. Since each of us has a unique atomic vibration, a sort of thumbprint, the machine will find only those matching its initial sample. Its accuracy is up to 99.999987%. 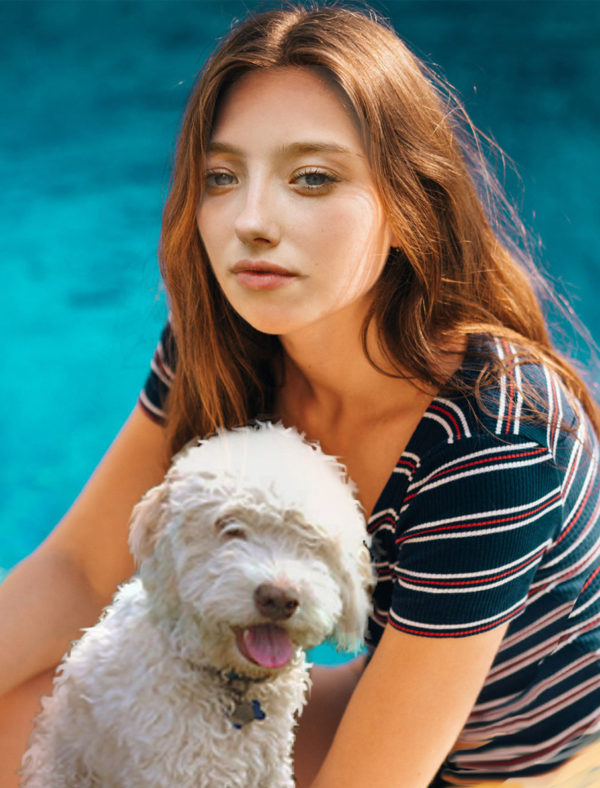 Above: Piperita Sandex, software developer for Brandpwoder and dog trainer in her free time. “Think of APR as a dog who learns to find truffles after you made him taste one,” she says.

Below: APR’s design was reduced to its essential components so that each element could operate smoothly, “out of the box”. It won’t be the best example of sleek design – we admit – but our APR does the job. 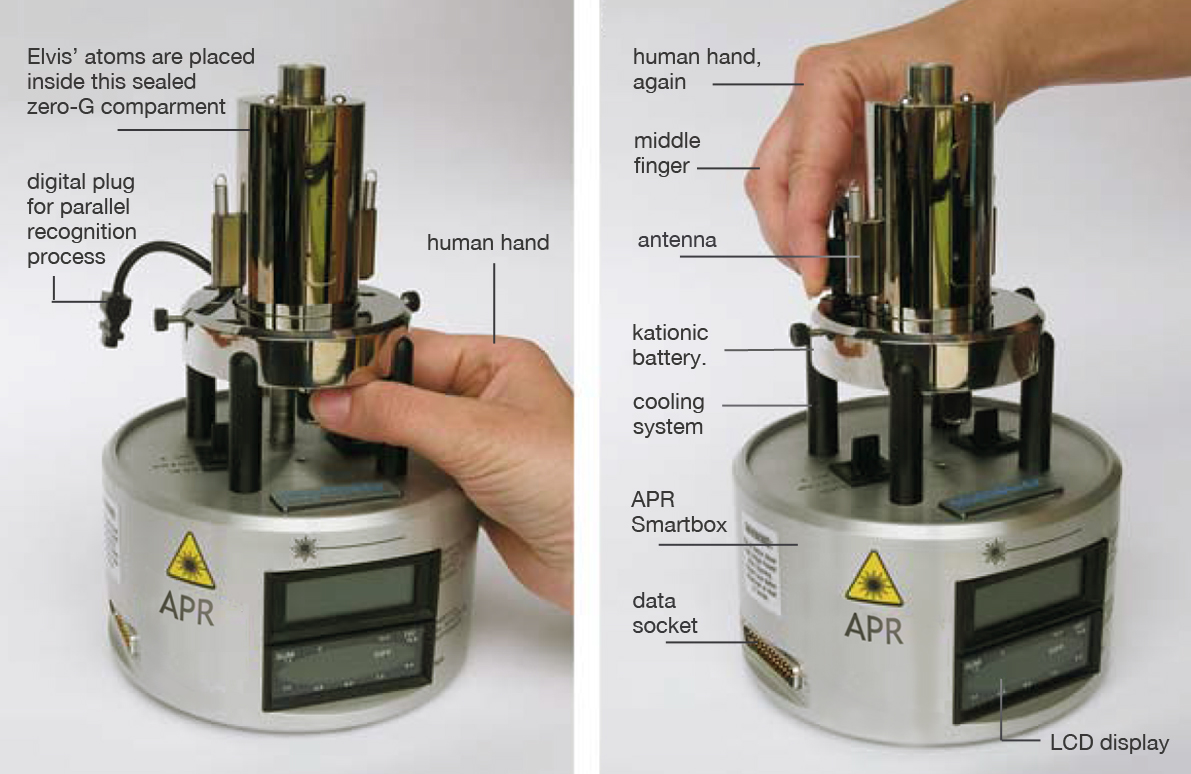 After completion of APR, we flew to Memphis to find an original piece of Elvis. For 650 US dollars we bought a pair of black socks that belonged to the King of Rock & Roll. These socks came with a Certificate of Authenticity, and a receipt dated 25.07.1962. A bargain! 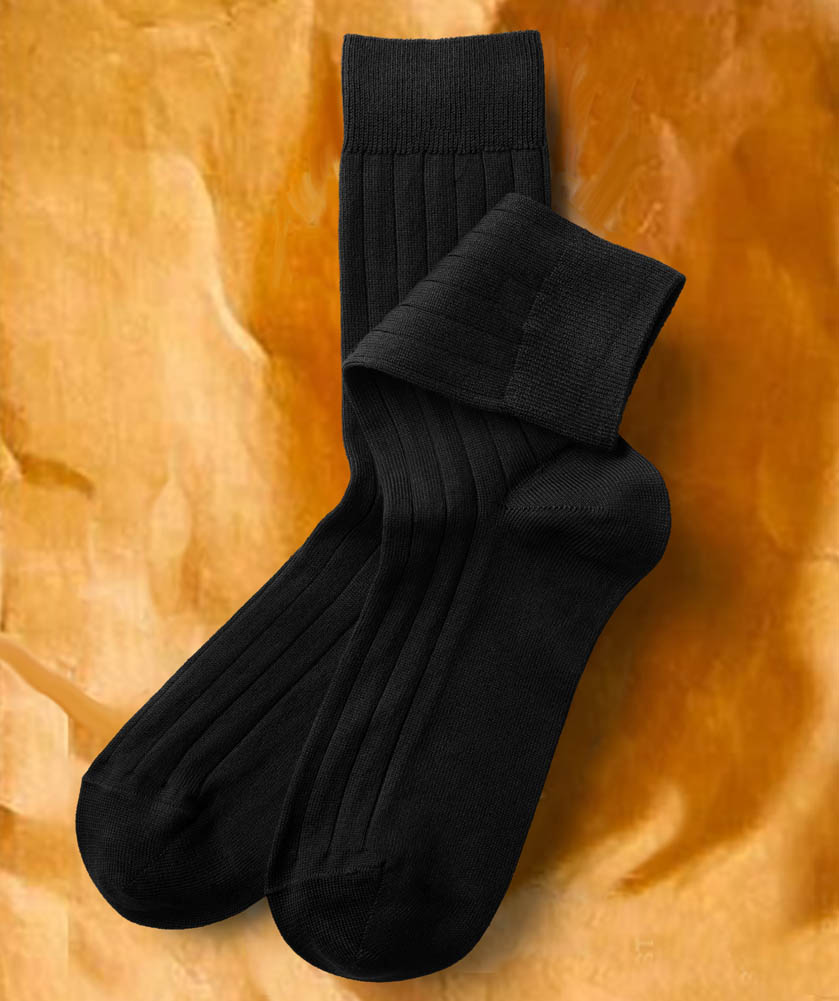 When we scanned Elvis’ socks, we found millions of his atoms. “It’s amazing to see how much stuff people leave behind when they die,”- To Nin Zu told us.

Below: the 3D living model of Elvis’ atomic thumbprint. When you have undeniable evidence that atoms are such a vibrant micro-universe, you start to look at reincarnation and eternity with new eyes.

“Its technology is so advanced to make DNA profiling look like Stone Age,” Monika Sukcox commented, while testing the powerful APR interface on her iPhone (below).

Above: It’s empty, apparently. But every bag contains at least 1 million of Elvis’ atoms. You can order your bag of Atomic Elvis for just 9,99 U$. Contact us at: posmaster@brandpowder.com. The merchandise will cover research costs and 10% of the revenues will be given to charity.

Above: Zuby von Kastormeyer, head of technology at Brandpowder. Her computing skills proved to be invaluable in the development of the APR software. Zuby can talk about her Porsche or quantum physics with the same passion. She is an Elvis fan since she was a toddler. “Had I lived in Elvis’ times, sure enough I was going to be a groupie!”. 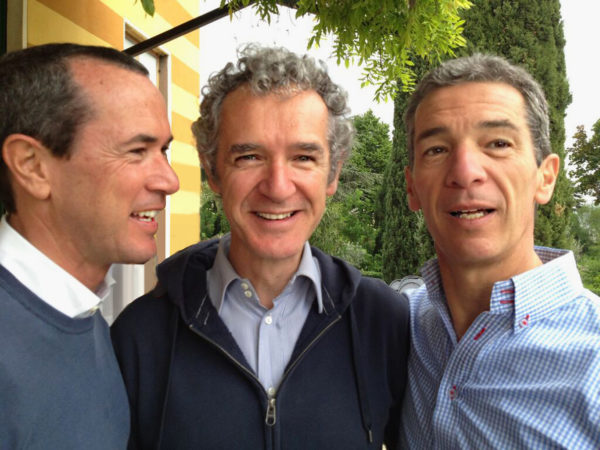 Above: (left to right) Momi Twisthook, chief developer, and Carlo Muttoni, Brandpowder’s President, celebrate the success of the APR project with To Nin Zu, head of I.A.M.S., in Tokyo. Atomic Elvis has been an incredible endeavor for all of us. Brandpowder wishes to thank Joseph Kilmore, Catherine Pollack, Zuma Romao, Li Yan Doh, prof. Changor T. Kamianevic, Pippi Sandex, Lou “Spongy” Graff and Monika Sukcox for their effort, hard work and dedication. Last but not least, very special thanks to Elvis for still being with us!

A TRIBUTE TO ELVIS: 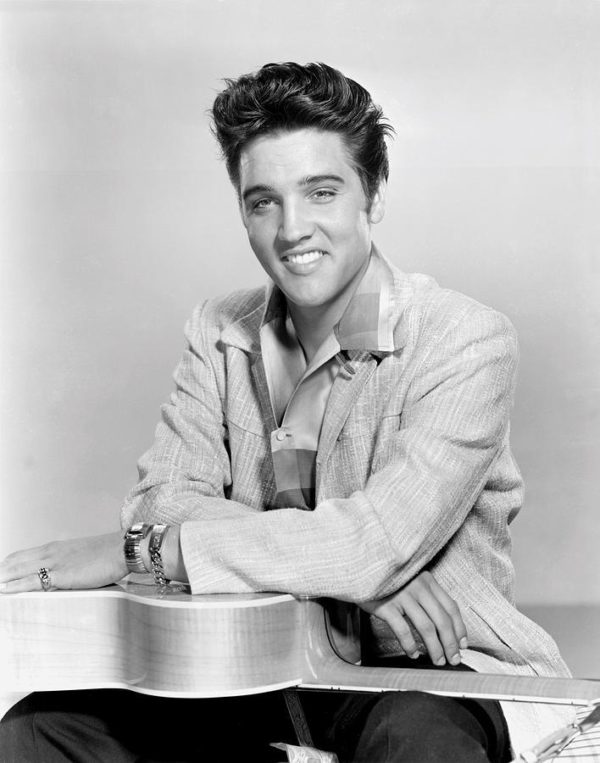 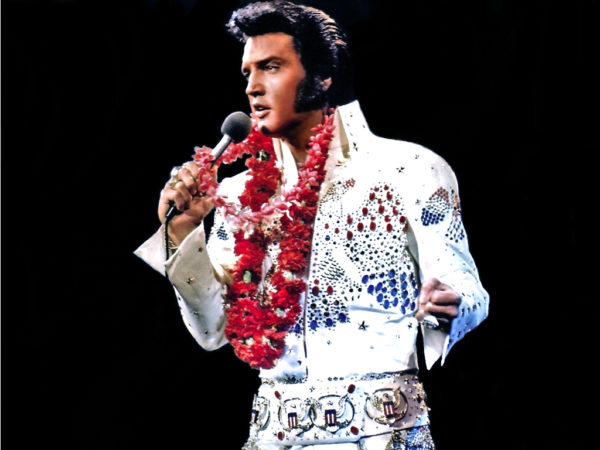 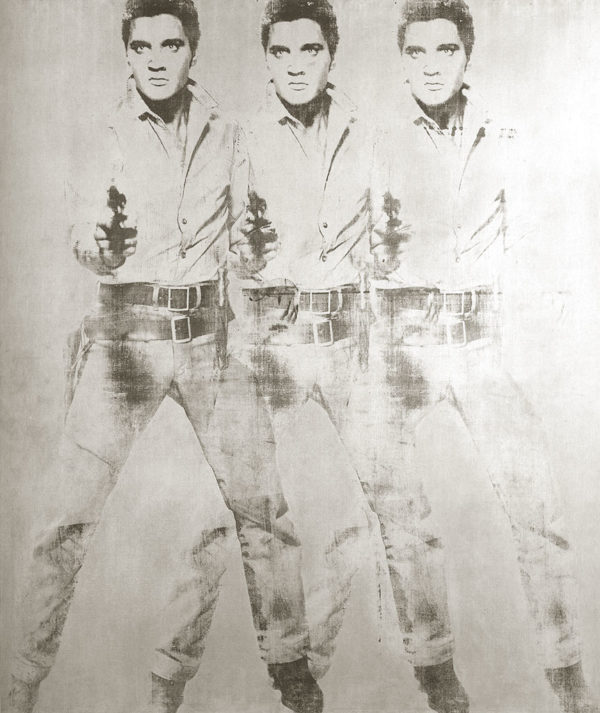 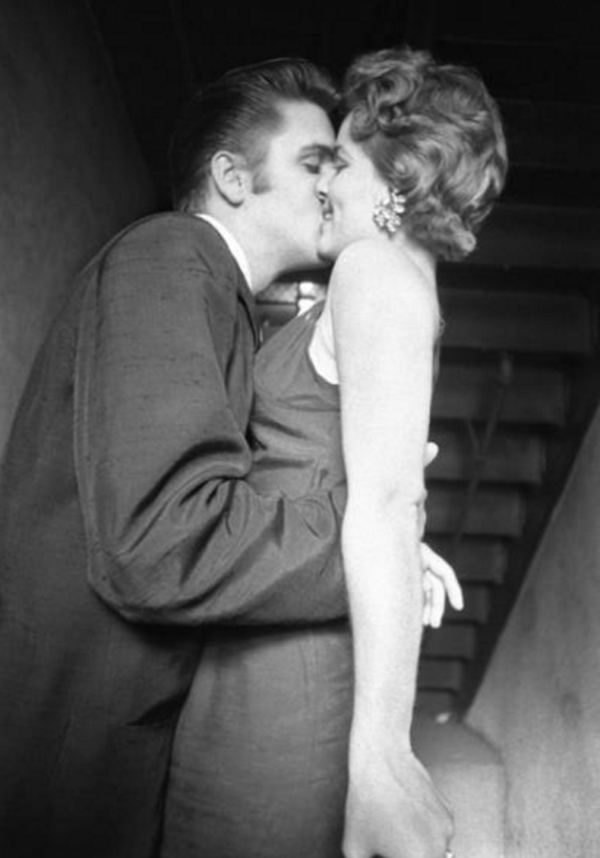 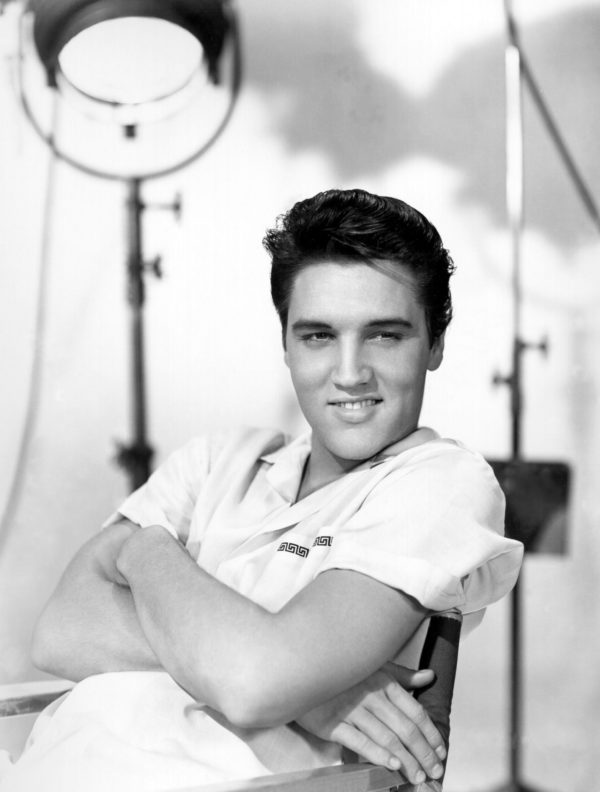 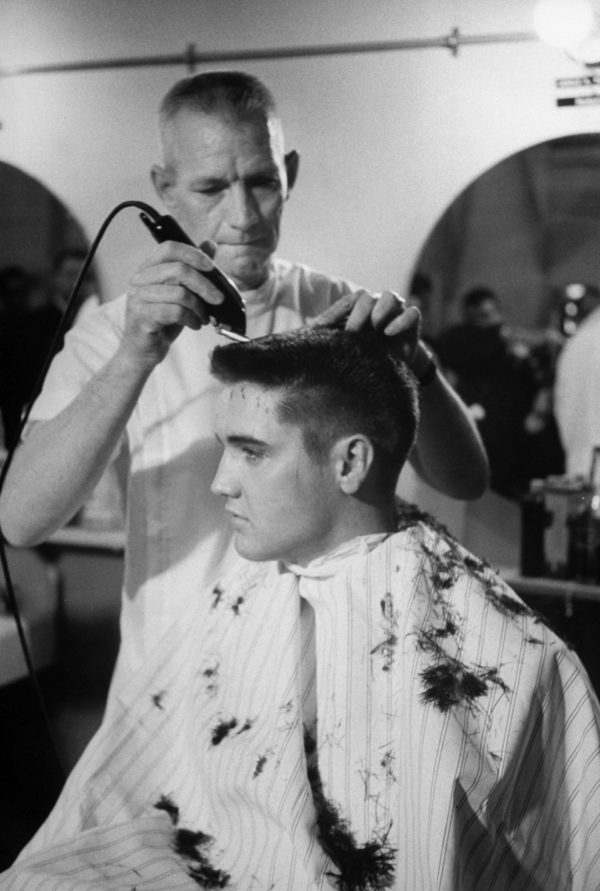 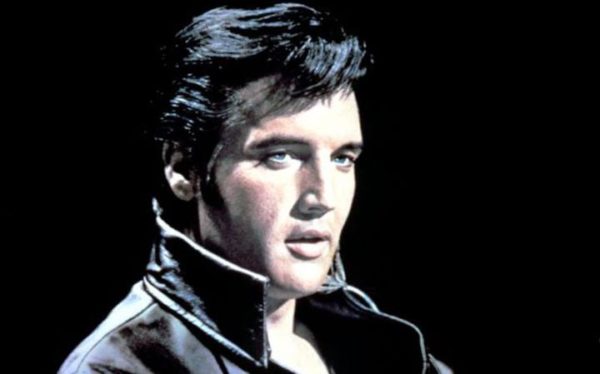 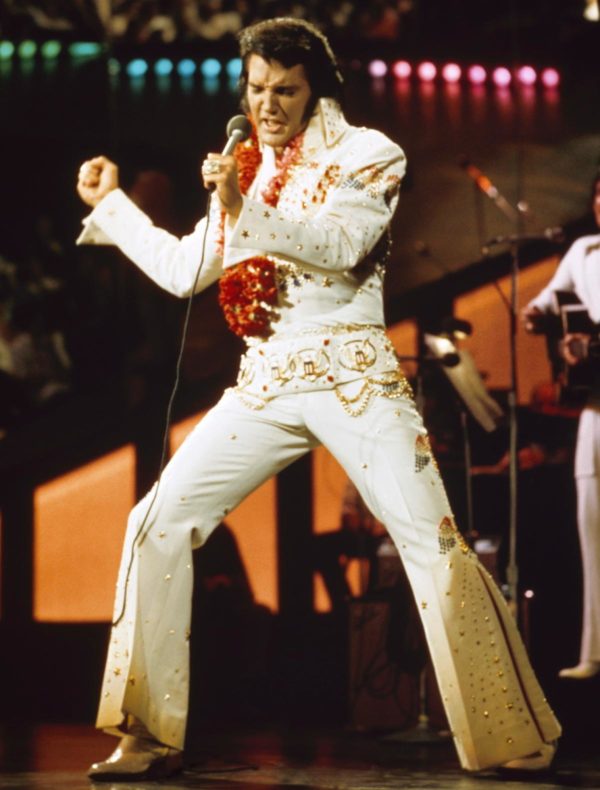 Elvis had a unique human touch with his public and fans, as you see in these two live recordings. Everybody loved Elvis. None of today’s stars may aspire to have…an atom of his style.

Note from the Editor: Please do not confound “Atomic Elvis” with the plant bearing the same name.

Disclaimer: this post was made as a tribute to Elvis and, as any other Brandpowder production, the project has to be seen as an experiment in communication and not as a commercial attempt to gain any material advantage leveraging on the popularity of the rock star. // Minamahal Kita. Maari ko bang hingin ang kamay mo para sa sayaw na ito? Magandang araw sa’yo. Nasaan ang kasilyas? Hayaan mo ko mapag-isa!