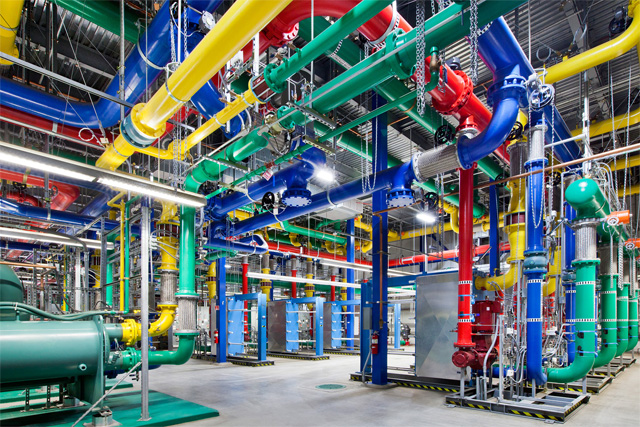 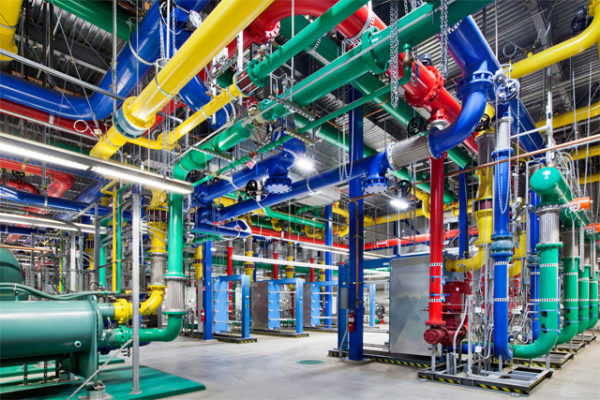 Have you have wondered how does a search engine look like? Well, now you’re served! For the first time ever, in fact, Google opens its doors so that we can take a look at it. The view is impressive:  thousands miles of cables and pipes surround an endless stack of hard disks, back up systems and servers, neatly packed along narrow corridors where blinking leds signal the correct functioning of computers checking on zillions of worldwide links and contents, including your emails. 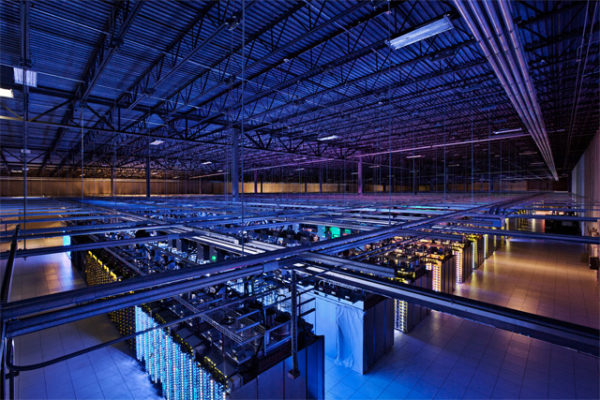 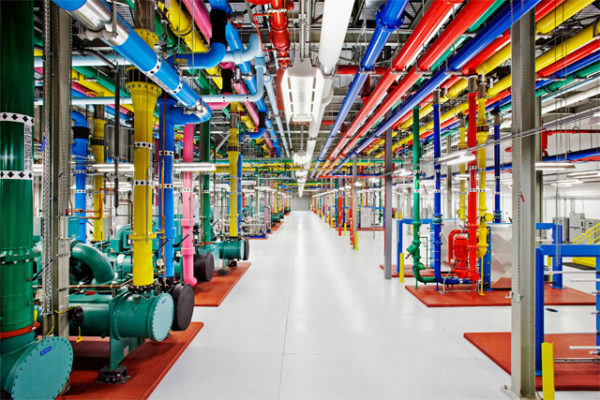 The energy consumed by the web today equals that of all commercial airlines put together (about 2% of total CO2 emission). The internet will grow faster than jumbo jets, if not for the simple reason cool bits are gradually replacing good old atoms. This will translate into a different (not higher) destination of our resources, mostly oil and coal. What is going to affect us more will be an anthropological shift:  human beings evolved from nomads to travellers, then to tourists; the next step will be a Still Society that barely moves because information, in form of memes, avatars and digital substitutes will move content on our behalf.

Going back to Google, it’s interesting to note that most of the energy goes to run the system around the clock; moreover,  in order to have a fast engine (an average Google query takes 0,2 seconds) you need to cool down the heat generated by its “horse-power”, and an efficient water and air conditioning system requires extra energy. 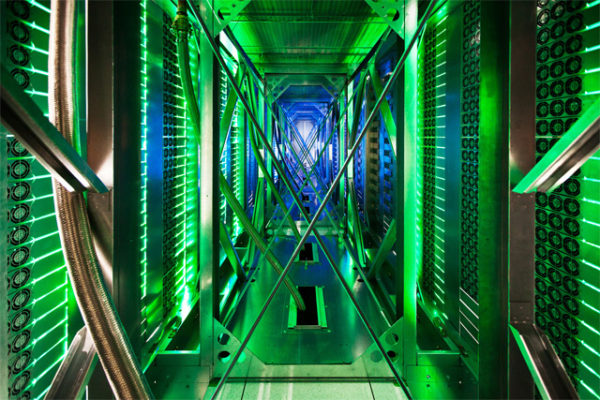 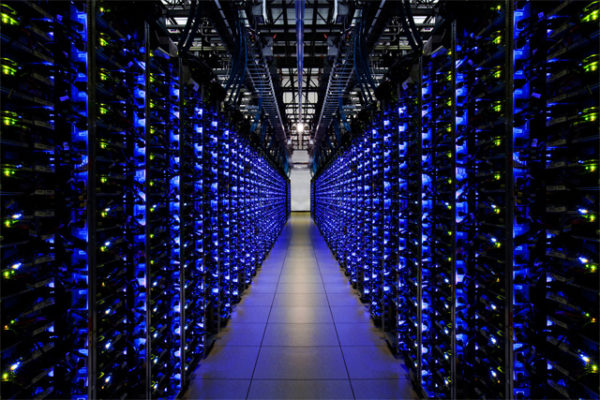 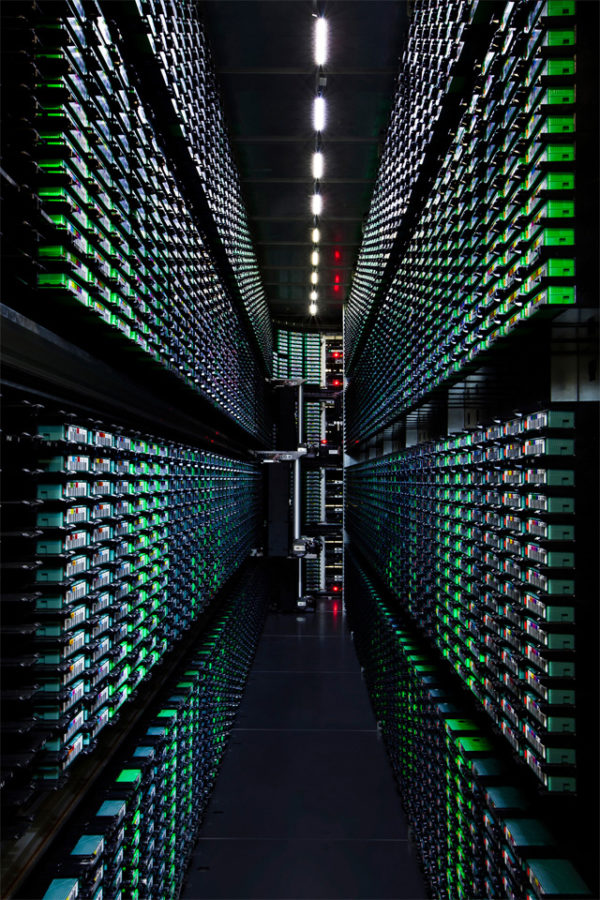 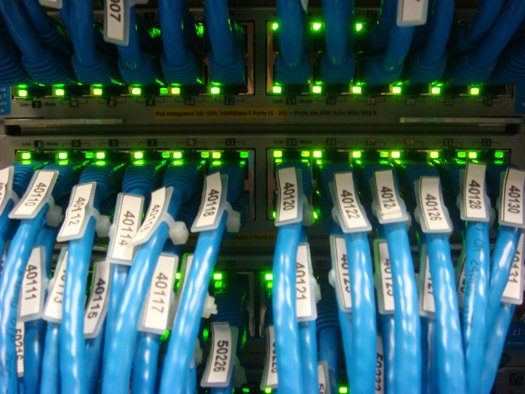 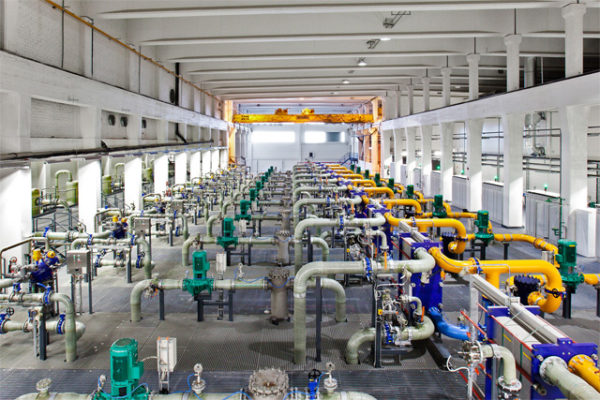 Google’s energy consumption last year was calculated to be around 260 millions watt of continuous suck. The figure is growing but, along with that, also grew the Company’s efficiency in the application of  low impact technologies, from recycling procedures to renewable forms of energy. The aim is to lessen the impact of CO2 by 54 million tons a year. Google is always in the target of environmentalists who are tring to demonstrate its servers are heavily polliuting the planet. But what would be the carbon footprint of someone taking a shower and getting ready, hopping in a car, driving to the library while smoking a cigerette, finding the information in a few books made out of chopped trees, driving back home then driving back to the library again to return them, then driving back home again? If you consider the whole traditional process for accessing information, it might be true the opposite: Google is actually helping the planet to reduce carbon emissions. One thousand searches on Google produce as much carbon dioxide as driving a car for one thousand meters. Alex Wissner, a professor from Harvard University, published different results: a couple of searches on Google requires the same amount of energy of boiling a kettle for a cup of tea, generating about 7 grams of carbon dioxide. Google disagrees, saying the figures are way too high. And it’s easy to see why. Computers are extremely efficient machines, light years ahead of any steam engine like, for instance, a kettle.

Today’s democracy opens up to the tyranny of the individual. Everyone is free to attack Companies, Governments and Institutions, throwing insults without having the technical preparation, the moral stature and the authority to do so. The smaller the attackers, the bigger their targets, of course. These people know Big Companies, having a lot at stake, are exposed and thus fragile, and what they also know too well is how to handle shocking numbers and statistics in order to attract a crowd of equally incompetent morons. In such cases, everything takes place with tremendous superficiality and speed: virality is in proportion with  spectacularity, not accuracy. Numbers represent a valid proof only when presented within a frame that places everything into proportion. Only a deep analysis and quiet, personal consideration can provide us with the right perspective. Google, from our humble point of view, is the greatest innovation after the wheel and the fact it’s freely accessible to the majority of us doesn’t mean we have to take it for granted or, even worse, we are authorized to discredit it. Only a few people, unfortunately, are aware that the Era of Free Things turned  the adult society into a kindergrten of spoilt children.

Enchanting view….all these flashing leds calling for attention from thousands of racks and servers and all the cooling pipe….it seems that Google has nicely repackaged the colorful pipe that R. Piano invented for the George Pomidou center in Paris (cooling) , with the Matrix image of millions life not to wake up from their virtual reality (servers lines) and finally the early phone lines switchers where busy nicely dressed women were in and out cable to connect voices (cabling) ….Giambattista Vico with his ‘corsi’ and ‘ricorsi’ remains very true…history repeates itself with similar images, but very different outcomes….sorry I gotta go now ….to the library to rent my newspaper…I can save every day 1 euro for it by driving 15 KM back and 15Km forth and getting it for free….smart isn’t it ? The R

your comments are much more than tapestry. It’s always illuminating to find references to your visual library of memories, not without the usual touch of self irony. Thank you for your contribution. Drive safely.

Absolutely amazing. Thanks for sharing