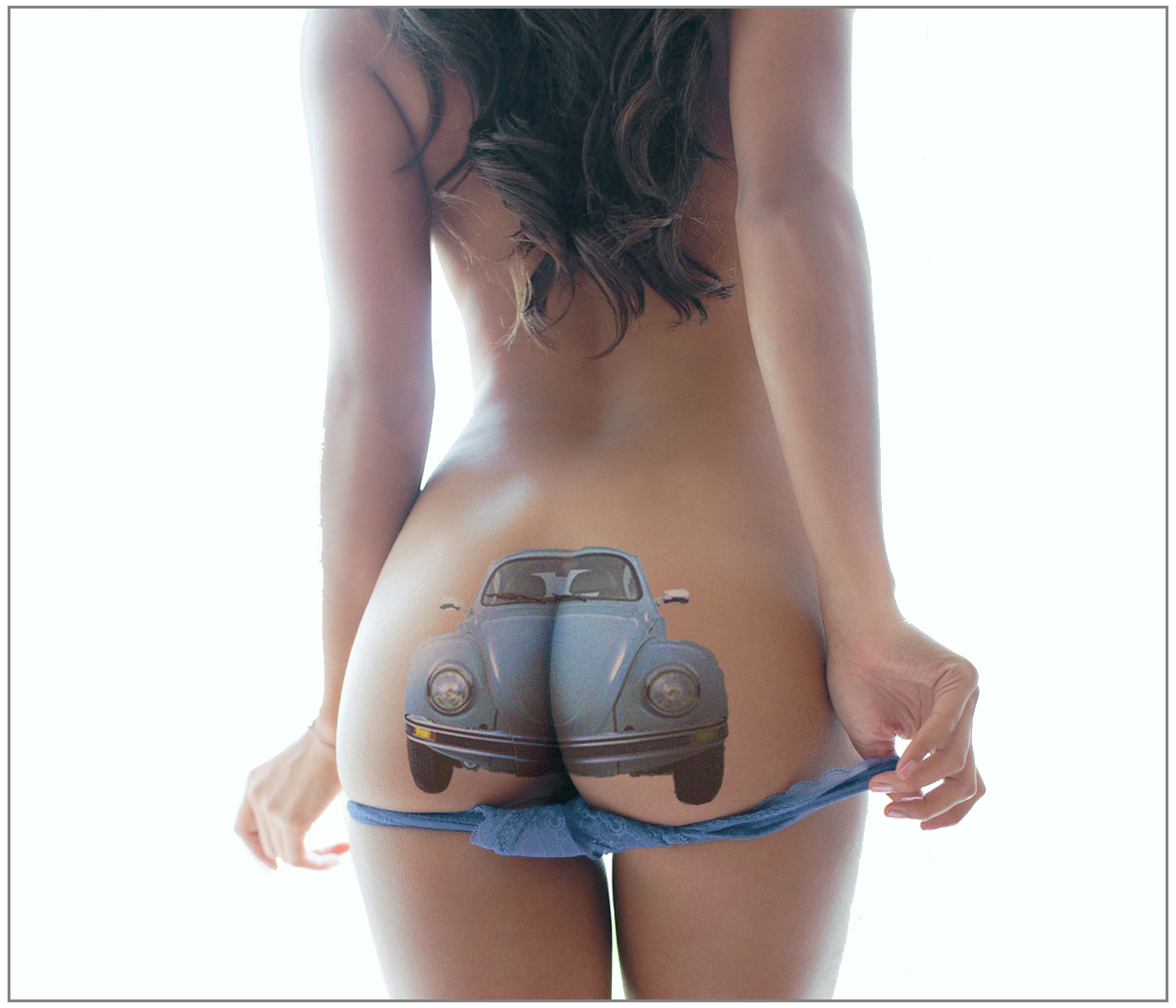 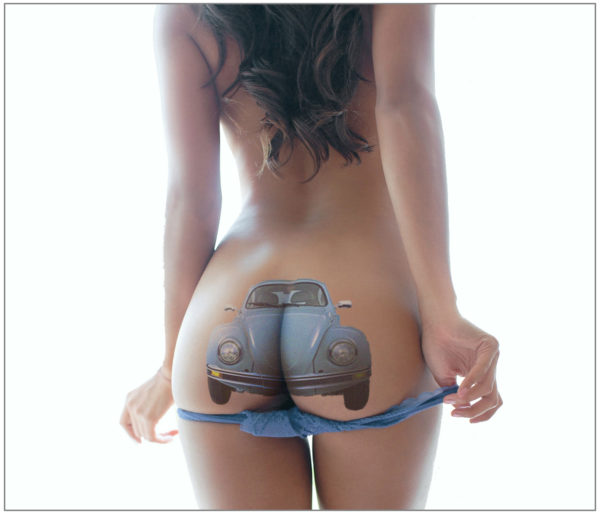 Opening picture: “Ass Auto”, the last masterpieces by Jack Carb.  The Volkswagen Beetle‘s curvy shape perfectly fits with the sexy buttocks of Irene, a young model from Munich who now lives in New York. “I was homesick and wanted to carry a piece of my Country with me,” she told us.

JACK CARB: THE KING OF TATTOO.

Jack is a living myth. Each one of his tattooes is considered a unique painting on epidermis, a bravado in skindeep art that meets the most demanding customers in the world: Women! Jack Carb, curiously enough, doesn’t tattoo men. According to him, males’ skin texture is too thick, and the bigger pores impede to work on minuscule details. “Working on a young women’s body is like painting on silk,” Jack says. “But there’s another reason for my choice: tattooing is an art where you get very intimate with your customers and, honestly, I prefer not to have physical contact with same sex clients. My strategy cuts half of my business off but that’s not a problem, since I already can’t keep up with female clients’ requests and the waiting list is getting longer everyday.” Jack is exclusively specialized in cars and bikes’ tattooes and doesn’t accept to work on any other topic. “If you want a Maori symbol, a mermaid with big boobs or a flaming heart with the word MOM written on it, go somewhere else. I don’t do that kind of crap!” Jack says with a grin of self confidence. He lights a Partagas cigar with the dying embers of the previous one. The tropical smell of burning hand-rolled tobacco leaves fills the open space of his studio in Uptown New York, with wisps of blue smoke slowly dissolving in midair. Jack Carb is a chain smoker, drinks rhum as mineral water and doesn’r disdain five course meals in posh restaurants and yet, you easily picture him, fifty years from now, still alive and kicking asses.

The Brandpowder Team was called for a quick assignment. Jack was looking for a new name and logo. His shop opened in 1979 and never closed its doors ever since. Originally it was called “Tattoo On Wheels” but Jack  didn’t like it anymore: “too corporate,” he told us, and since he was looking for something stupid, he thought to give us a ring (we told him he couldn’t have done a better choice).

We discussed together the concept of “body shop”, a name that refers to the space where cars are repaired but also winks an eye at a sort of market for human spare parts, but it was still too vague. Then we came up with the name “Nice Body”. We suggested the name provided a tangible end benefit with an ironic, sexy twist, and Jack loved it. The next step was to create a simple, funny logo with a vintage flavor and, to add that extra touch, we proposed to have his business cards printed with tattoo inks. And that’s what we did, in the end. 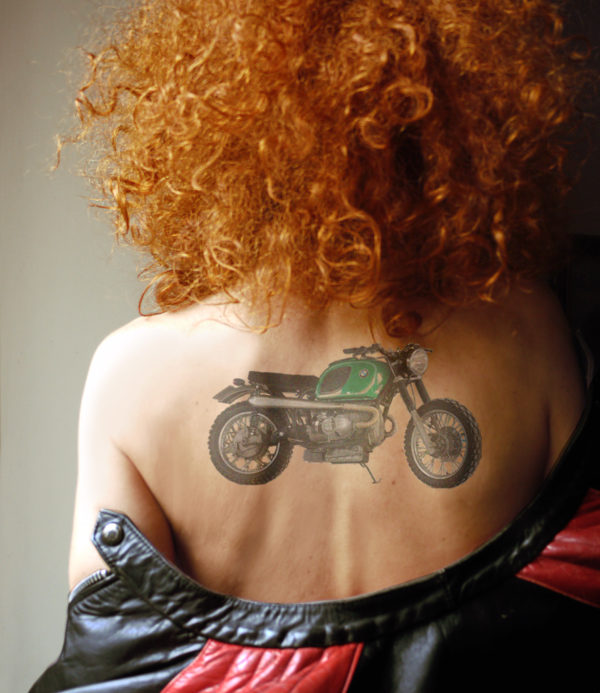 Above: Beatrice is a BMW cafè racer and asked Jack to have her ’72 emerald green, custom made “brot-mit-wurstel”, tattooed on her back. Below: The King working on Helena, a web designer with a weakness for Cadillacs. Jack Carbs builds his own tattoo machines out of dentists’ high-tech props, ultrasound needles (no pain, no bleeding) and space age equipment. He produces his own colors, mixing high quality natural pigments with vegetal melatonin and minerals. It’s this secret recipe that gives his images their velvety, ultra-detailed finish. 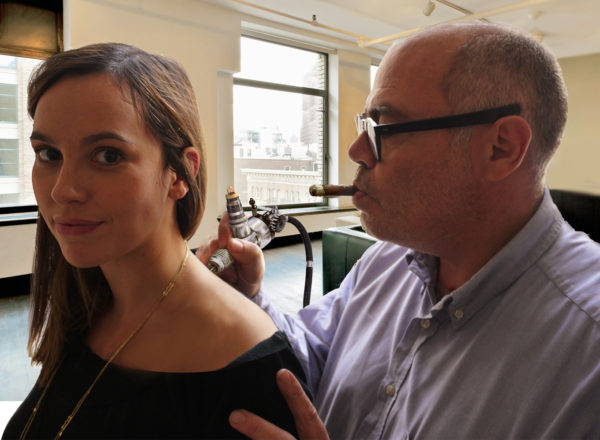 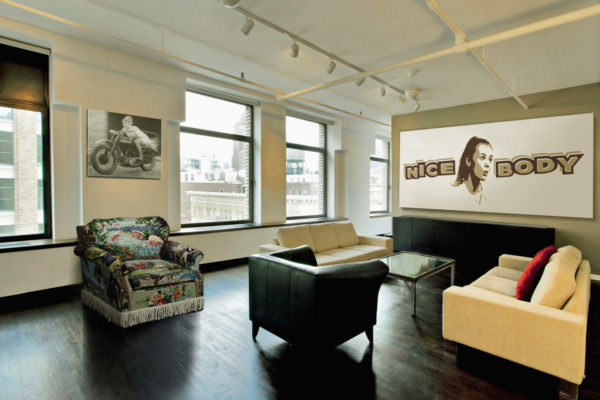 Above: Nice Body’s headquarters in New York. The studio also includes a reading room, fumoir, Scandinavian sauna and a pool table. At the ground floor Jack Carb plans to open a private bar with a garage and repair shop where his beautiful customers can hang around.

Below: the Nice Body business card is printed with tattoo inks on hand made Kozo Washi Japanese paper. The girl’s pretty face was inspired by Shayna Texter, a girl who made history in flat track motorcycle races. 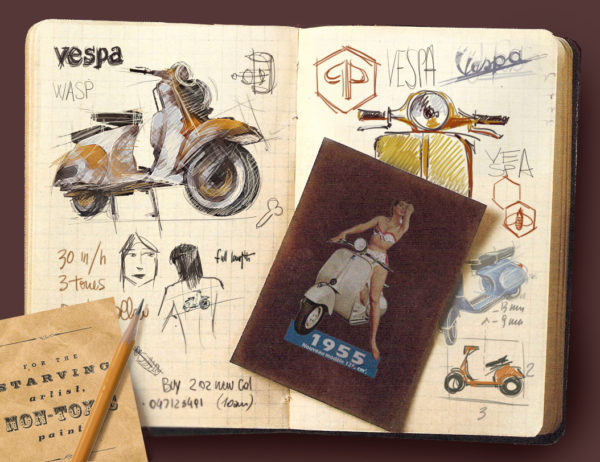 Above: one of the cahier where Jack Carbs carefully plans his tattooes, collecting information, stories and photos for inspiration. “They say a diamond is forever” Jack says,  “but most women get rid of them at the end of a love story.  A tattoo is forever. That’s a real fact. And it’s my responsibility to make sure my customers are happy with it.”

Below:  Mary Rose, from Madrid, wanted a 1968 Ford OSI (Officine Stampaggi Industriali). The Italian/German sport car is a collector’s item, and very hard to find all over Europe.  When Jack Carb told her how much she was going to pay for the tattoo, she replied: “You are telling me I can’t even afford this Ford?” Jack liked her sense of humour and decided to make it for free. 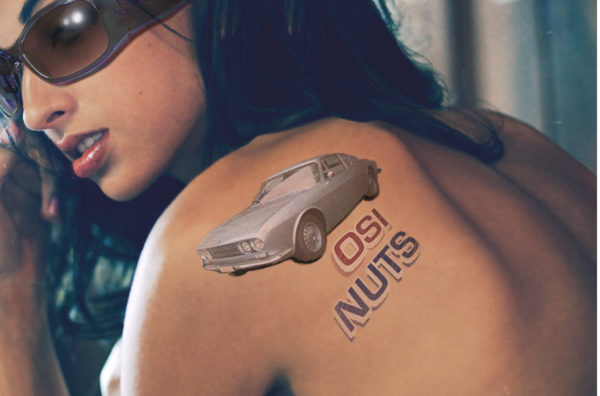 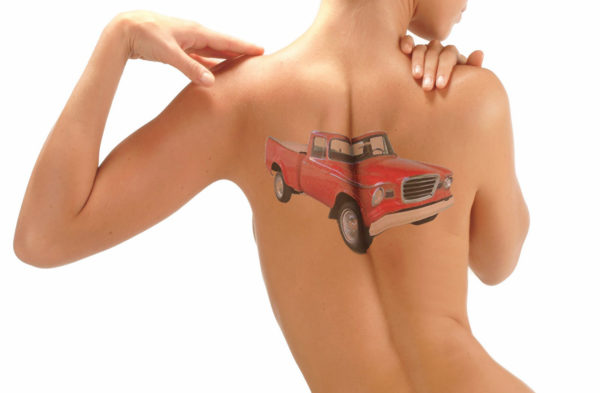 Above: This young woman who chose anonymity asked for “Big Red”, a 1960 Studebaker Champ light truck, featured in the Gold Catalogue of American Icons. It’s worth to mention no other tattoo artist in the world can obtain white overtones on skin; only Jack’s artwork bears the unique brilliance of polished metal.

Below: Another photo from Jack Carb’s portfolio. Sarah, a girl from Brooklyn, asked for a BMW logo with a different acronym. Alv was the name of her Norwegian boyfriend and also the three preceeding letters of BMW (as HAL computer stood for IBM in the movie “20o1. A Space Odyssey” by Kubrick). 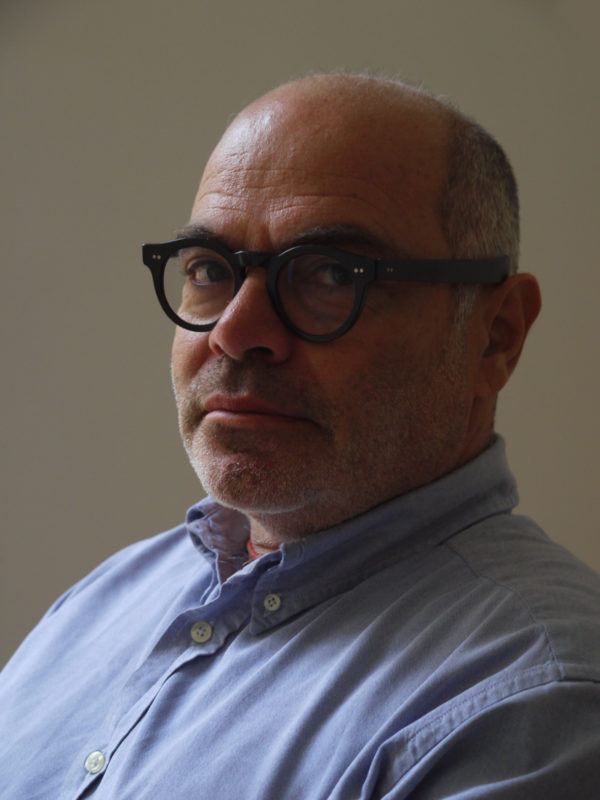 Above: Jack Carb on a pause between two cigars. To get this picture we had to hide his box of Partagas. Jack didn’t like the joke and told us not to do this again.

Below: one of the most ambitious tattooes ever done by Jack Carb: the exploded view of a V-engine in full colors. Sandy, a 29 year-old from Alaska married to a truck driver, asked the crank shaft to coincide with her navel (the tattoo was awarded a third place at the World Skin-Inx Competition, last year).

Before leaving New York and the Nice Body Studio, we asked Jack Carb if there ever was a request by one of his female customers he refused to do. He thought about it for a sec. “Oh yeah,” he said. “Once a Hollywood star came to my studio asking to have a tiny Toyota Prius tattooed on her ankle. I told her: tattooes are not meant to be tiny, and there’s no way I’m gonna ruin my reputation with a goddam’ Prius.”

Dear BT you should reach out Jack and discuss a couple of tattoos he should consider. 1970 Ford Escort. It could be the perfect match between car and women. You can get a Ford Escort for about 4000 dollars but I bet that a tattoo of a Ford on the body of an Escort could require much more from Jack. Second Trabant car could open an alternative business vintage for women going to NY but looking to carry a piece of their old Germany. The R

The Escort girl with the Escort car is an interesting suggestion in self-promotion of both categories, and we already passed your tip to JC.
As for the Trabant, we believe Jack Curb is better off at metal rather than plastic (which is, by the way, causing skin’s excessive perspiration).
Stay tune and keep sending your pearls of wisdom. We like to read you.

Shame I am not a girl. Do you think he would notice?- I can ‘tuck’ pretty well.

carloreply
– In reply to: urbandon

our PR office sent your request to Jack Carb. It’s a deal! – he replied – tell Pezzano to come over.
How about a Urban Vehicle?

The tattoos are incredible!!! The color, the creative designs and the precise drawing are all making people’s eye can’t move from them. Thanks for the picture sharing, we would love to sharing and expanding Jack’s tattoo works on our web.

Thank you so much for your comment, Sam!
We reckon Jack Carb is a genius and it has been a honor to meet him and work for his brand. He’s the perfect client: he didn’t discuss our creativity and money was not an issue for him. He’ also a good guy, despite his fierce look, and lots of fun. He (we) would be happy if you share and expand his works on your web! 🙂

Cigars Online Houston » The History of Cigars and Tobaccoreply

too badass for words.

Thank you Lara. This is really badass art but Jack Carb can’t help doing anything else rather than this. And we respect stubborn badass cool work. The BT

Where’s the key for all the parts in the V-engine tattoo? On second thought, never mind– some things are best left to the imagination… : )

carloreply
– In reply to: Mark Armstrong

we never thought about the nuts and bolts of this tattoo but yeah, you’re definitely right. This is a…key issue. Merry Christmas!

Hey carlo, thx for the follow! I just liked you images very much so I decided to follow you to. Have you got any special interest in gamification? If so, it would be great to hear about it, so I can think and write about it.
Have a nice Sunday.
May the force be with you,
Chris

carloreply
– In reply to: Chris Thomas

me and my Team don’t know much about ramification, even if we keep playing all the time and life is a playground where to experiment.
Let’s keep in touch. May be we can find new ways to collaborate and do something together. Thank you for following brandpowder.

Chris Thomasreply
– In reply to: carlo

Hey Carlo,
as I explained in my latest blog entry, I think gamification is only a small part of a strategy and philosophy for customer satisfaction. I think for some applications, gamification can really facilitate a lot and support the inner motivation and values of the customer. E.g. foursquare helps you to go out for party and to meet friends if you’re rather someone who stays home and I think going out and meet friends is something very important for a social being like us but nowadays, staying home alone in front of the tv with some fast food is not unusual. Many people wish for freedom but don’t want to live with the consequence which is called responsibility. So they have an argument about everything but rarely change everything. Gamification can help these people to use their last spark of inner motivation. So what do you do? I really like the images on your blog and hope that I will find some time (next weekend) to read some posts, too. Are there situations where you wish for motivational support? Is there work you think it’s dumb and kills your mood?
Best wishes too, and may the force be with you.
Chris