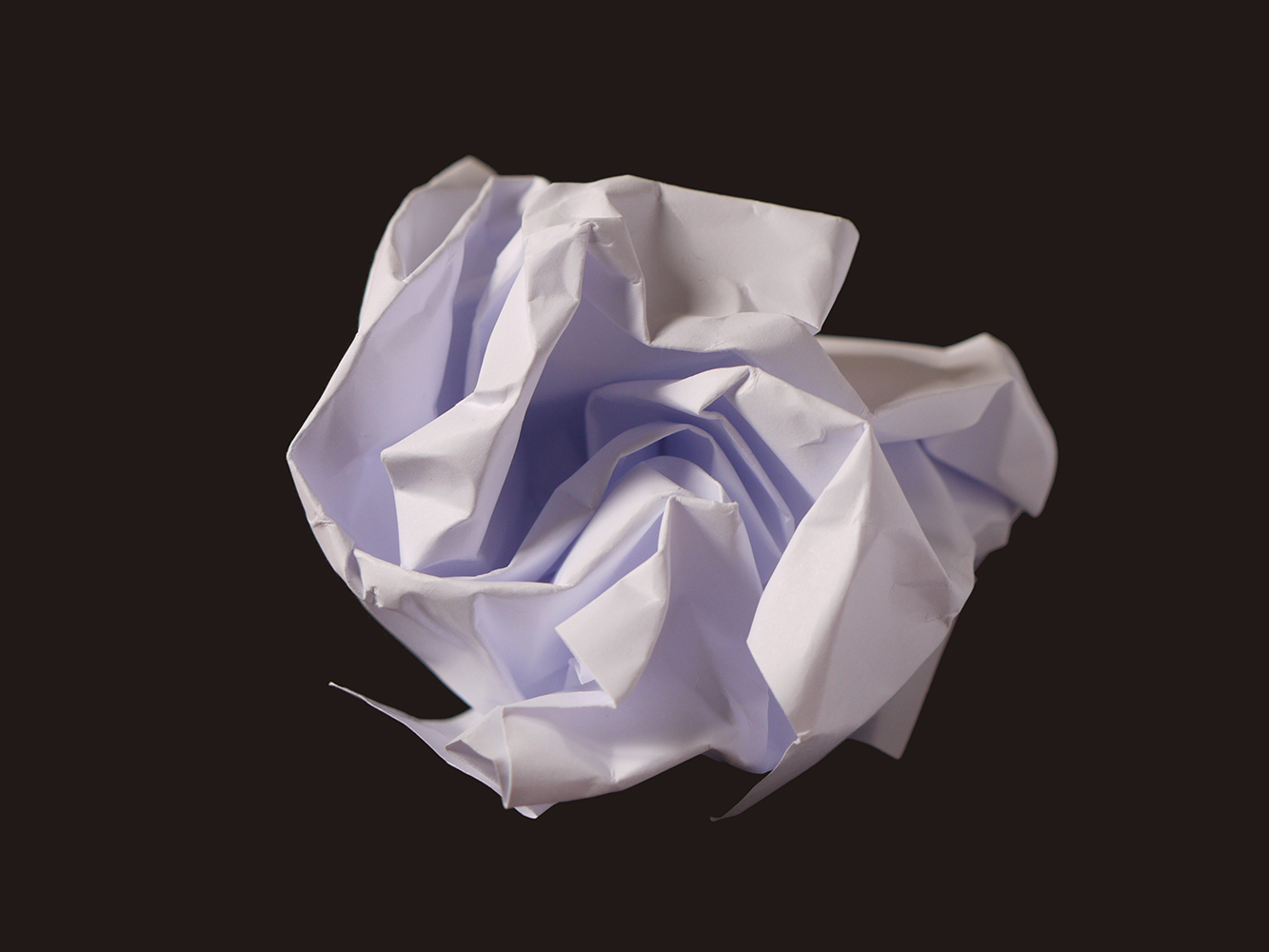 Mathematics, for us, is a mystery. It’s like putting science, art, religion and chaos into a blender, then switching to top speed. So, when the Queen Mary Maths Soc called us for a new logo, we felt more embarrassed than honored. Did it ever happen to you to be totally fascinated by something you don’t understand at all? Well, this was our sense of awe in approaching a topic we didn’t know anything about. Our first step was to do a bit of research on what had been done until then – how the Maths Socs around the world represent themselves – and we soon found out that the great majority either choose Platonic solids, Fibonacci spirals or Escher’s impossible figures. In a pun: numb numbers.

Brandpowder, as written in our motto,  likes to do experiments in visual communication and for us, honestly, to add another good-looking logo to the list it would have been as predictable as “π”, so we decided to push things a bit further, venturing into the uncharted territories of mathematics. 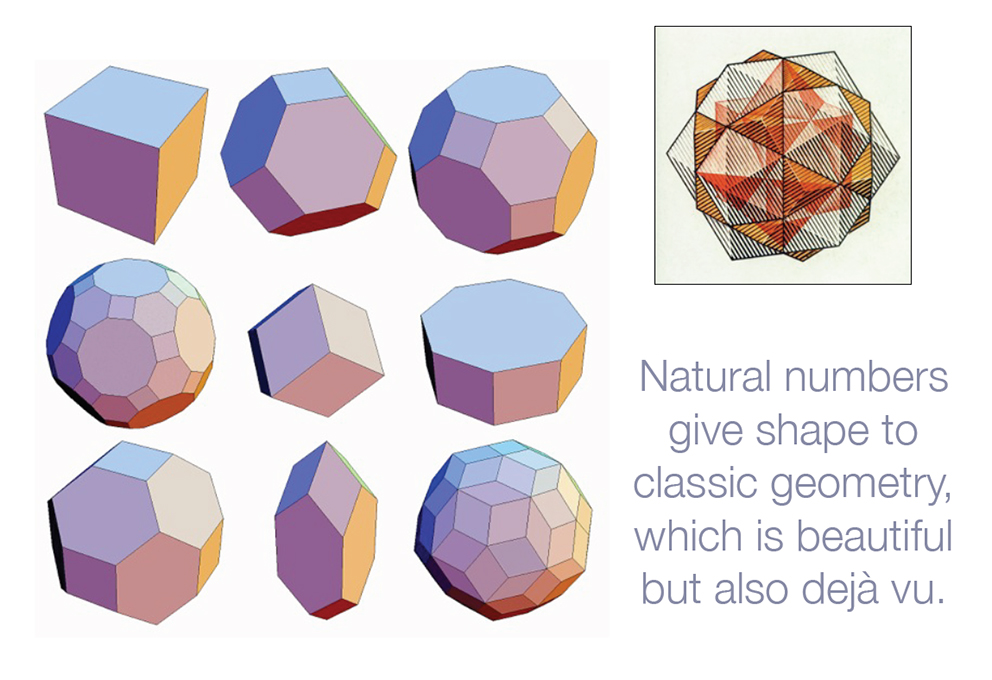 It’s impossible to represent a discipline that evolves so fast: whatever you draw, for a field like mathematics, it’s already old. Natural numbers, CG generated solids, fractals or Multiverses’ formula can be fascinating, mind blowing even. But the risk is to create a picture that’s going to be obsolete by the time you dropped the pen. So, we decided to shift the paradigm and reverse the point of view. 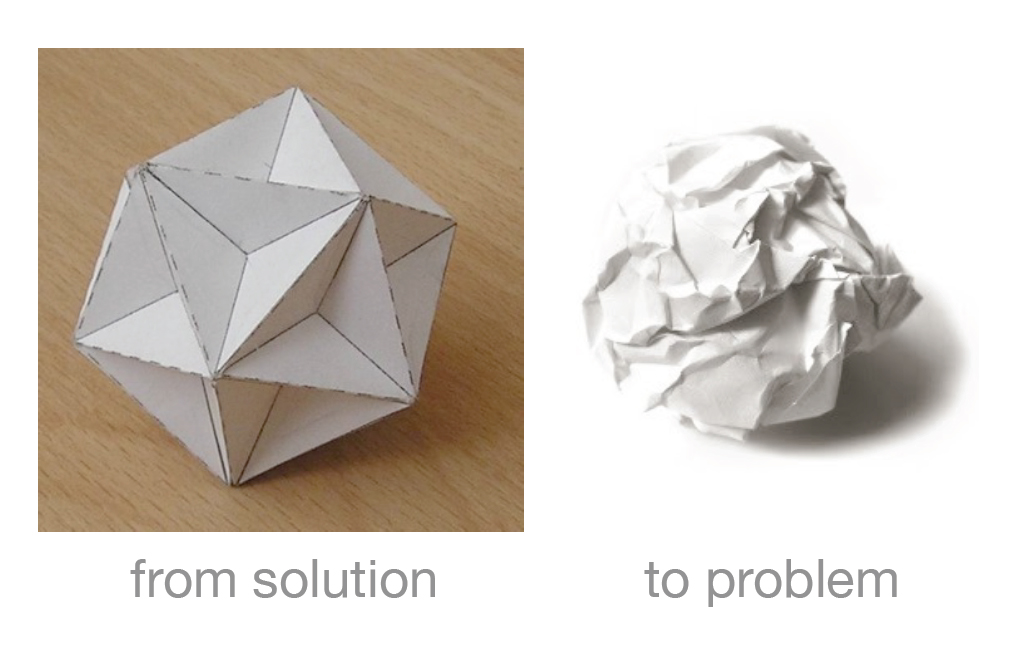 The idea for a logo was simple: a crumpled sheet of paper! You can look at it as a geometric figure of incredible complexity but, more than anything, you can see it as a symbol of the frustration of all mathematicians. It’s a tangible sign of their effort while solving a problem. In that humble piece of paper victory and failure may cohabit as an equal possibility and we thought maths people would love the idea: the crumpled paper is a lesson in humility and a place for conciliation. 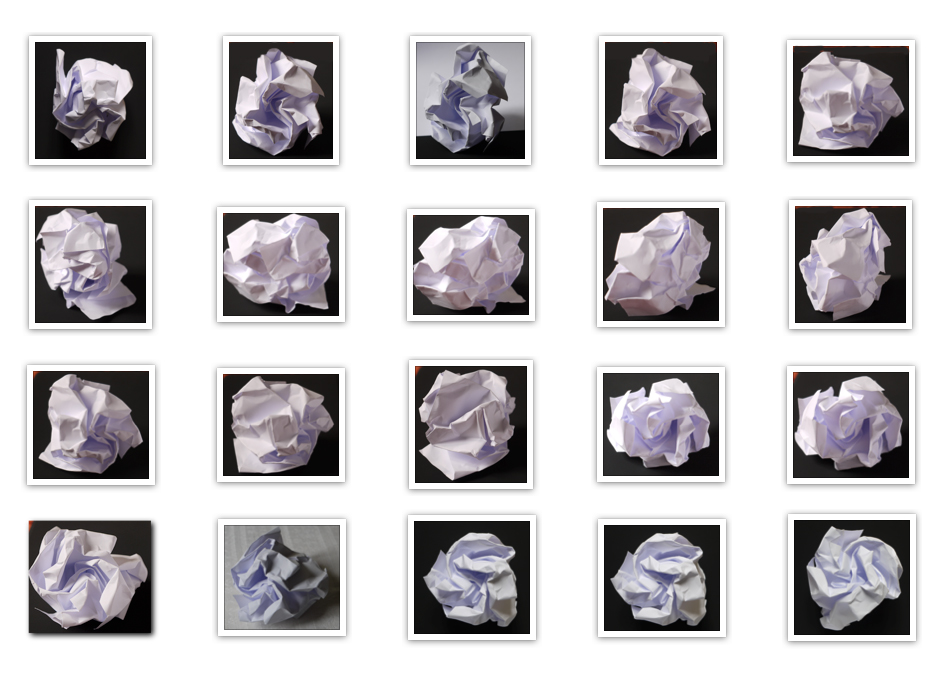 Hundreds of pictures of crumpled paper balls were taken, and then we selected one that looked particularly harmonious to us (see: bottom row, first from the left). Then we simplified its form by tracing straight lines over its surface, as shown in the picture below.

We thus obtained a geometric figure composed by 35 polygons, shaded according to their depth and orientation. Each polygon was dedicated to a famous mathematician, from the first unknown genius and inventor of numbers who lived approximately 35,000 years ago, down to Grigori Perelman, who finally proved Poincaré conjecture in 1980. If you want to read the complete list of all these notable minds, please check the pdf presentation of the project on slideshare. 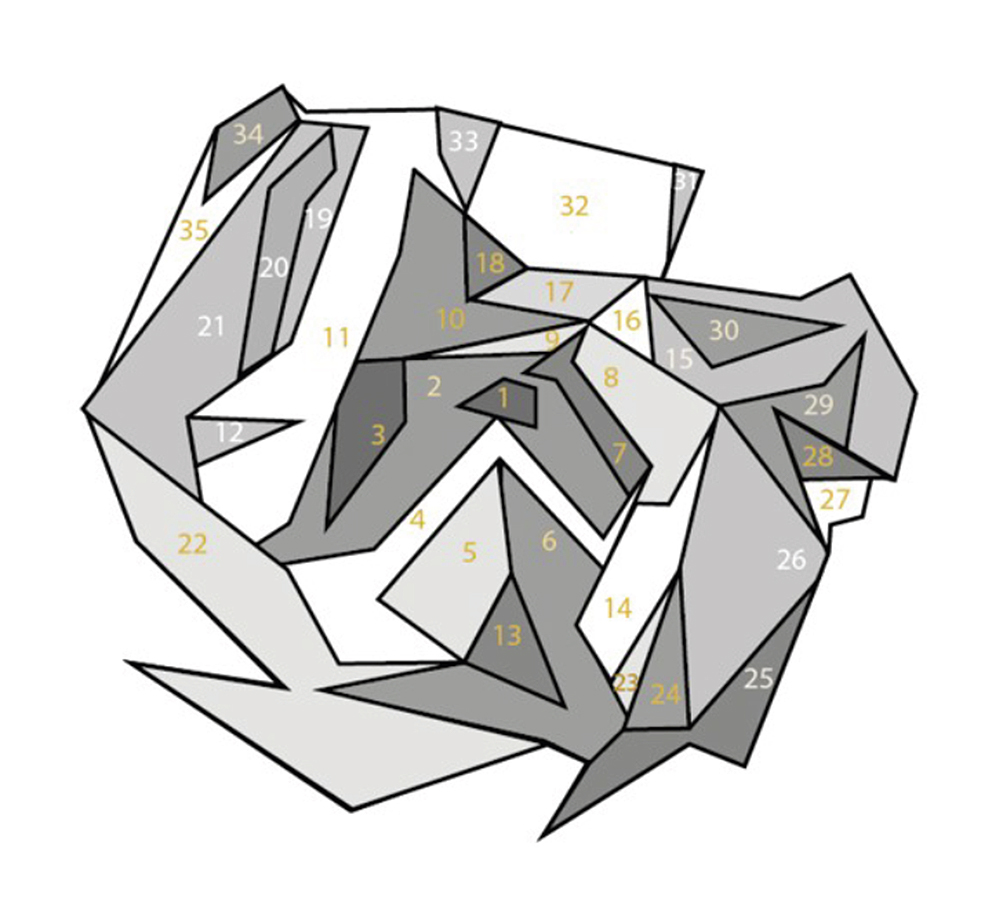 The original “paper ball” was sent to the president of the Queen Mary Maths Society, Miss Giulia Campolo, and her peers, inside a cardboard box as a symbolic gift. 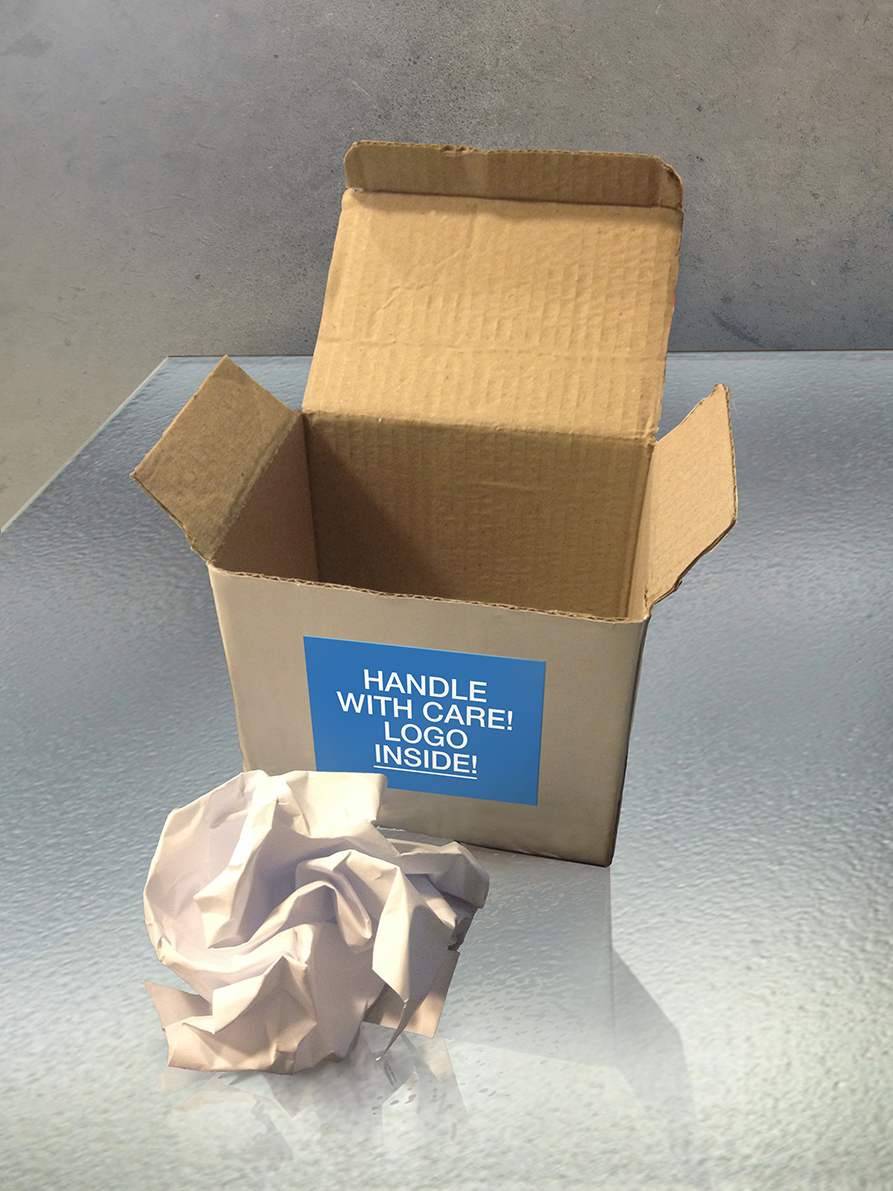 Below: noteworthy professor Peter Cameron, wearing a t-shirt with our logo (below). He said paper is what mathematicians need the most, along with a bunch of pencils and a dustbin. 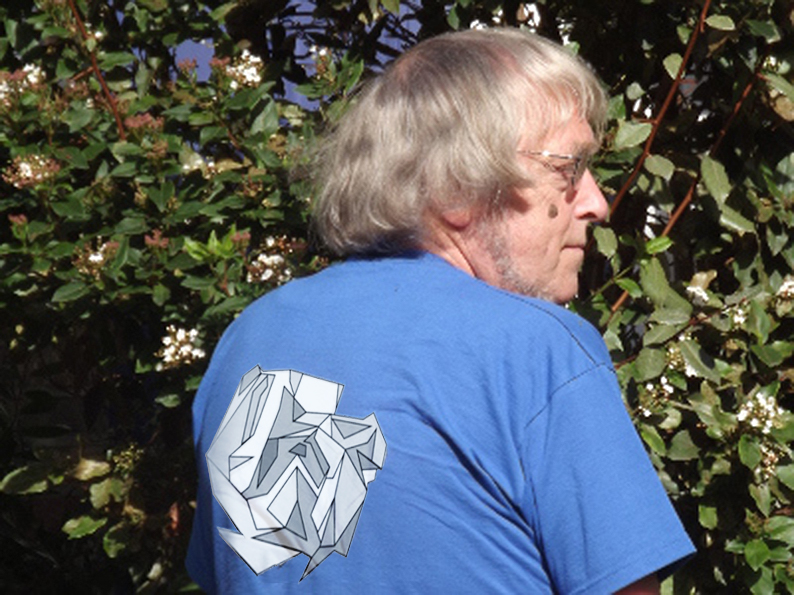 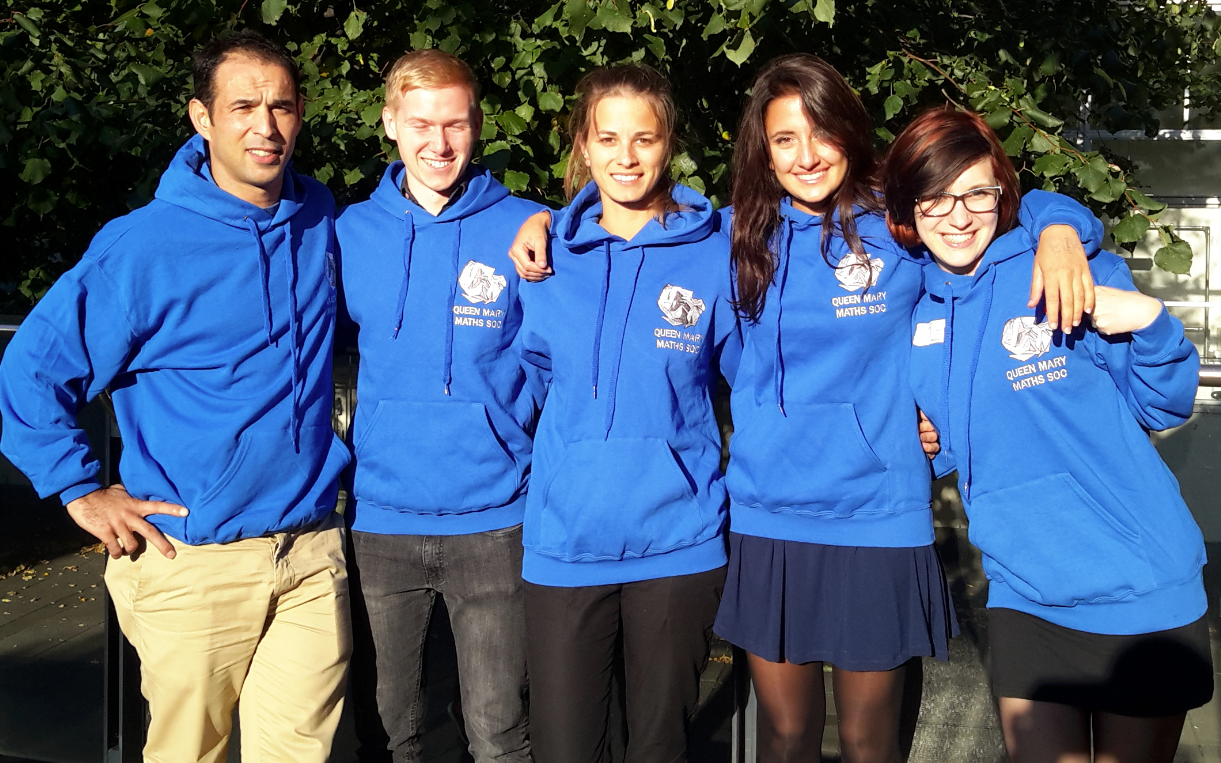 Above: the Board of Queen Mary Maths Soc. Left to right: David Witter, Ryan Twomey, Edyla Milkiewicz, Giulia Campolo and Martyna Sikora. To all of them, and to all students at Queen Mary University, our best wishes for a brilliant 2015. 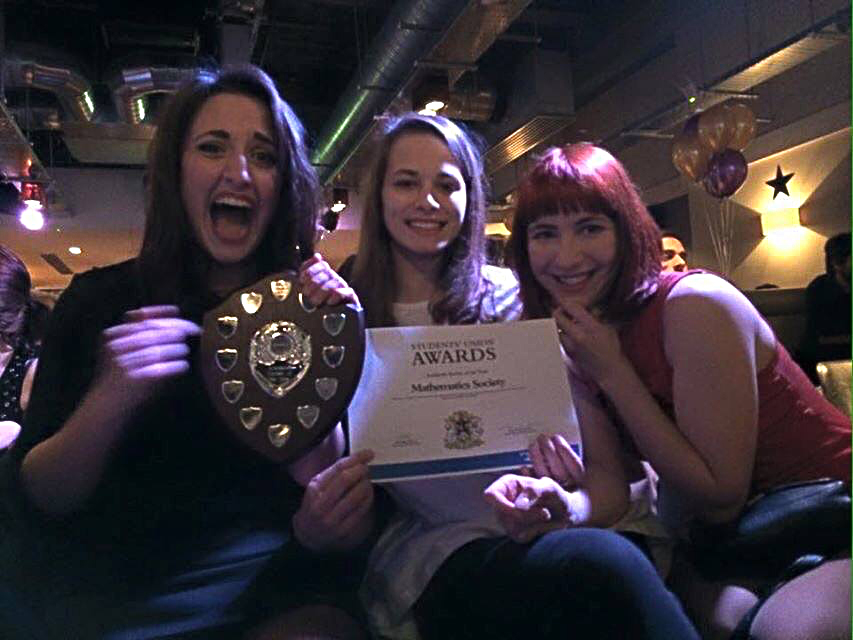 Last note: we are very happy to announce that March the 26th, the QMMS won the 2015 Students’ Union Award as the Best Academic Society of the Year.