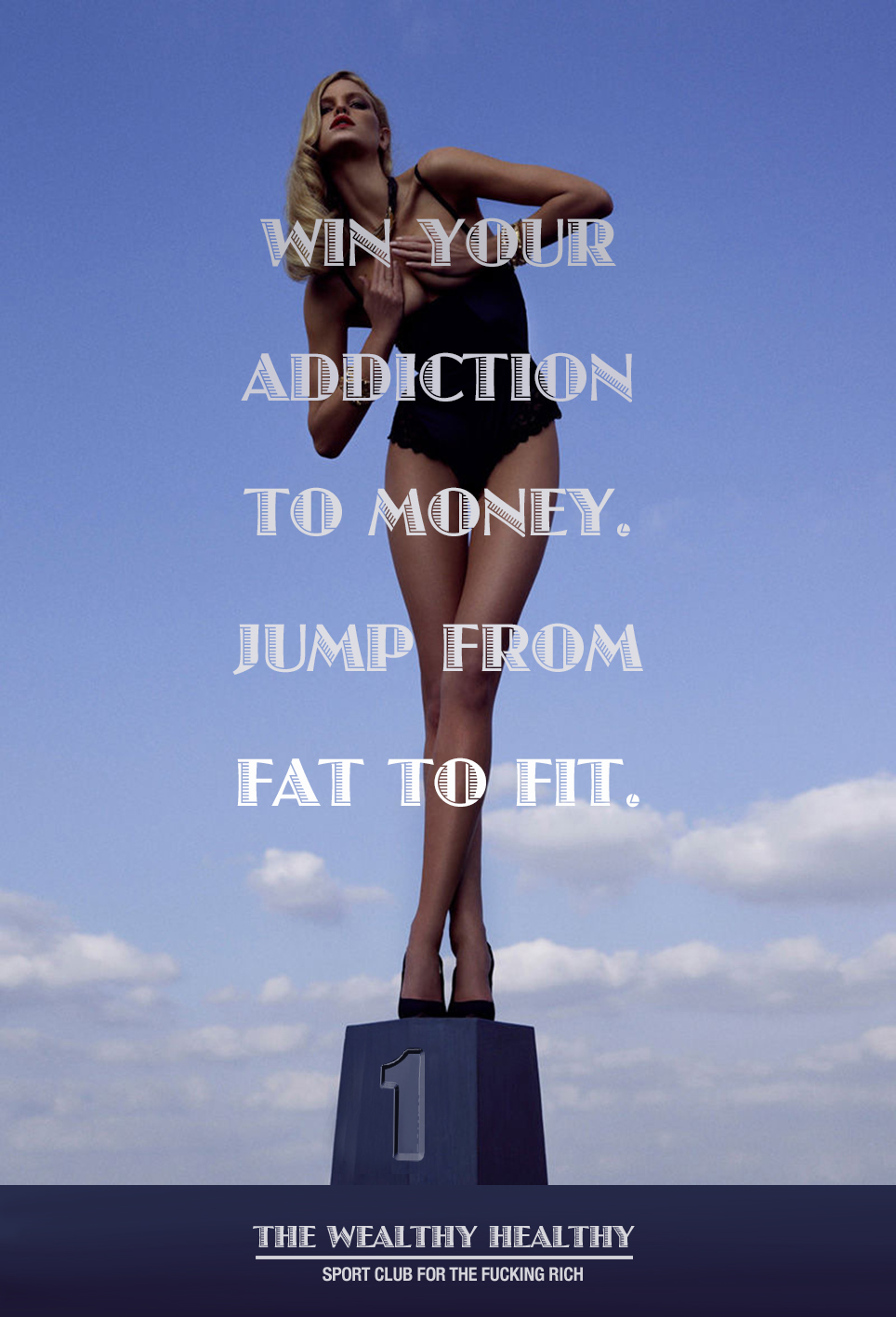 Above: the poster for the launch of the Wealthy Healthy Sport Club, developed by the Brandpowder Team.

Above: in Watch-Boxing you must smash very expensive timepieces against the punching bag. You can smash a couple of Hublot Big Bang ( 2170 diamonds, 5 million dollars each) in a couple of rounds.

Last year the Brandpowder Team was contacted by Martin Porridge, the President of the VRP Circle (VRP stands for Very Rich People) and when we say very rich, we don’t mean people who bath in champagne, eat oysters with pearls and dunk lobsters into their morning cappuccino. We are talking about people waaaay more rich than that. So rich that their butlers own a private jet. So rich that their swimming pools are large enough to accommodate real ships, which they LOVE to sink on blazing naval battles. So rich their monthly income corresponds to the GNP of a mid-size industrialized nation. So fucking rich to give Bill Gates a check every Christmas, being part of their duty to help the less fortunate.

Now, we understand this list of mundane extravaganza might sound irritating to normal folks like you and me. I mean, we sweat like horses just to pay the bills, the mortgage, the tax man and, by the end of the month – bang! – we have another month to climb in front of us.

But here comes the interesting bit: as soon as we met with the gentlemen of VRP, we realized they were worried about money more than we do. They are swimming into cash but money seems to be their only obsession: they are afraid to lose it, as much as not to have enough of it. “Cash is King!” – M. Porridge told us. “But this King is also our tyrant!”. Over a couple of glasses of Champagne (a cheap brand but – thanks God! – served at the right temperature) we asked them what we could to solve their problem.

“We don’t want to worry about money anymore!” – Porridge, again – “We need to extirpate the Fetish of Cash from our souls. Do you know money unspent causes cancer? We want to be free and foolish and have good time, again. Just like you, guys!”. We smiled politely because fucking rich people always try to convince you that poverty is a lot of fun. We smiled also because we were quite drunk by then and we asked a crazy amount of money for the project. They tried to negotiate, of course, but we didn’t cut down: that was part of the therapy – we said.  In the end they accepted and we asked for three weeks’ time..

Well, what you see here is part of our proposal. The idea is simple and based on two assets: Wealth and Health. We created a Sport Club where every activity must be performed in the most expensive fashion. What better way to break from the Chains of Money than destroying materialism itself? We told them the mental shift is from fatness to fitness. They bought the idea, and the Wealthy Healthy Sport Club for the Fucking Rich turned out to be an instant success. So much so, they started a franchise and made a fortune out of it! Our project, on this regard, was a failure. But you know VRP… They’re incurable! 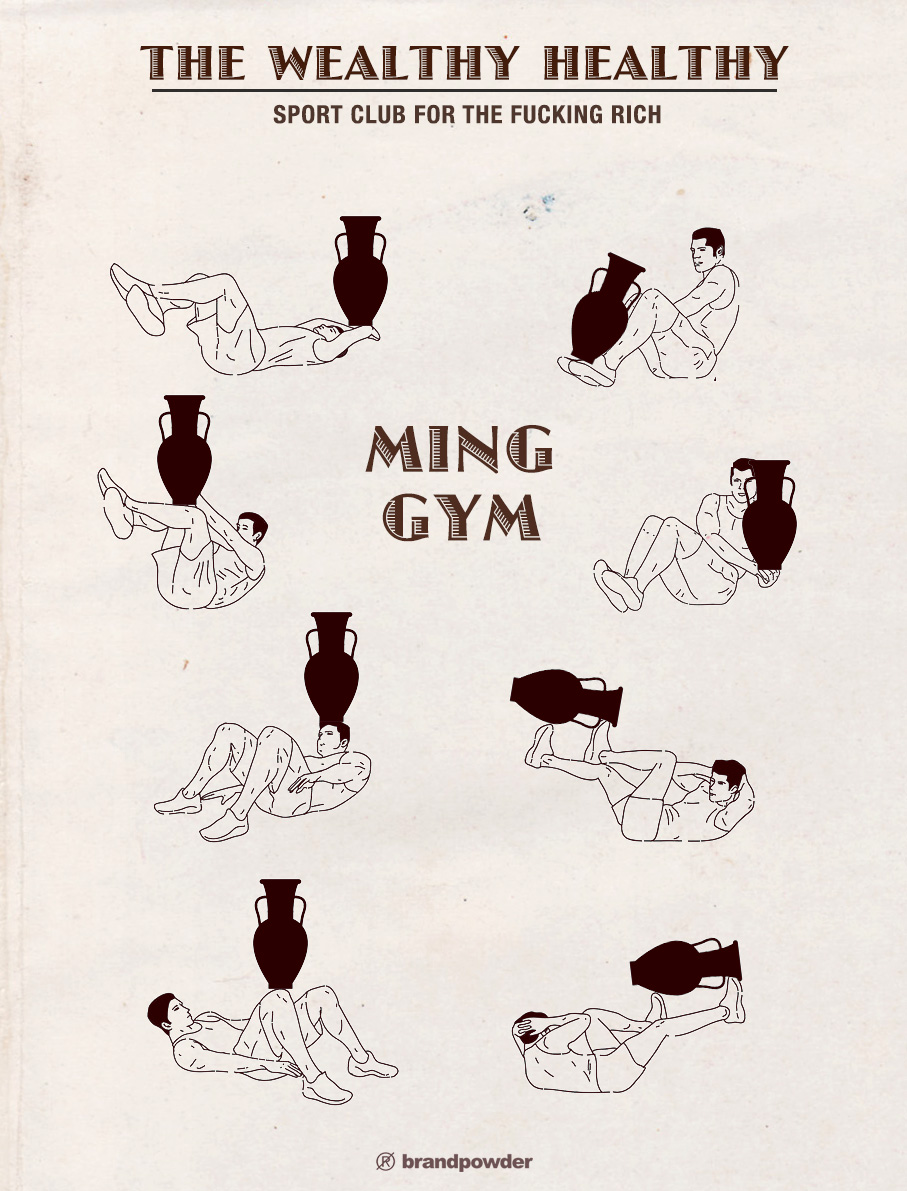 Above and below: Ming Gym requires extreme dexterity and concentration. A faux pas, and you experience a 21 million dollars crash. 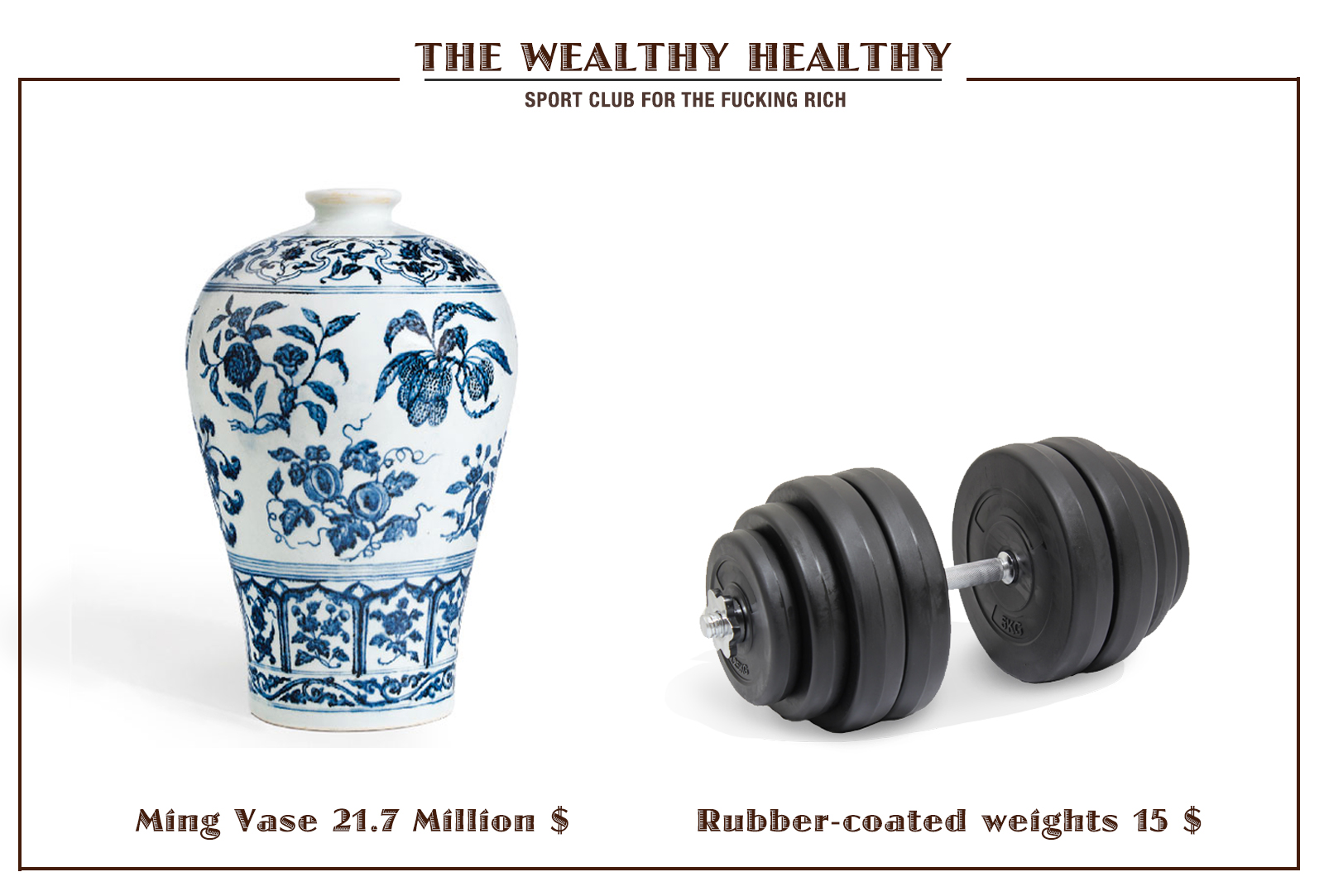 Below: When Rugby meets the superb art of the Ming Dynasty, you have a new sport called Rugming. Very rarely a vase reaches its final destination in one piece. Quite the opposite. Every Rugming match breaks, on average, seven vases. Famous auctions like Sotheby’s and Christie’s tried to stop this sport they labelled as “an act of vulgar vandalism against cultural heritage” but their call remained silent since the VRP Club owns every media on the planet. 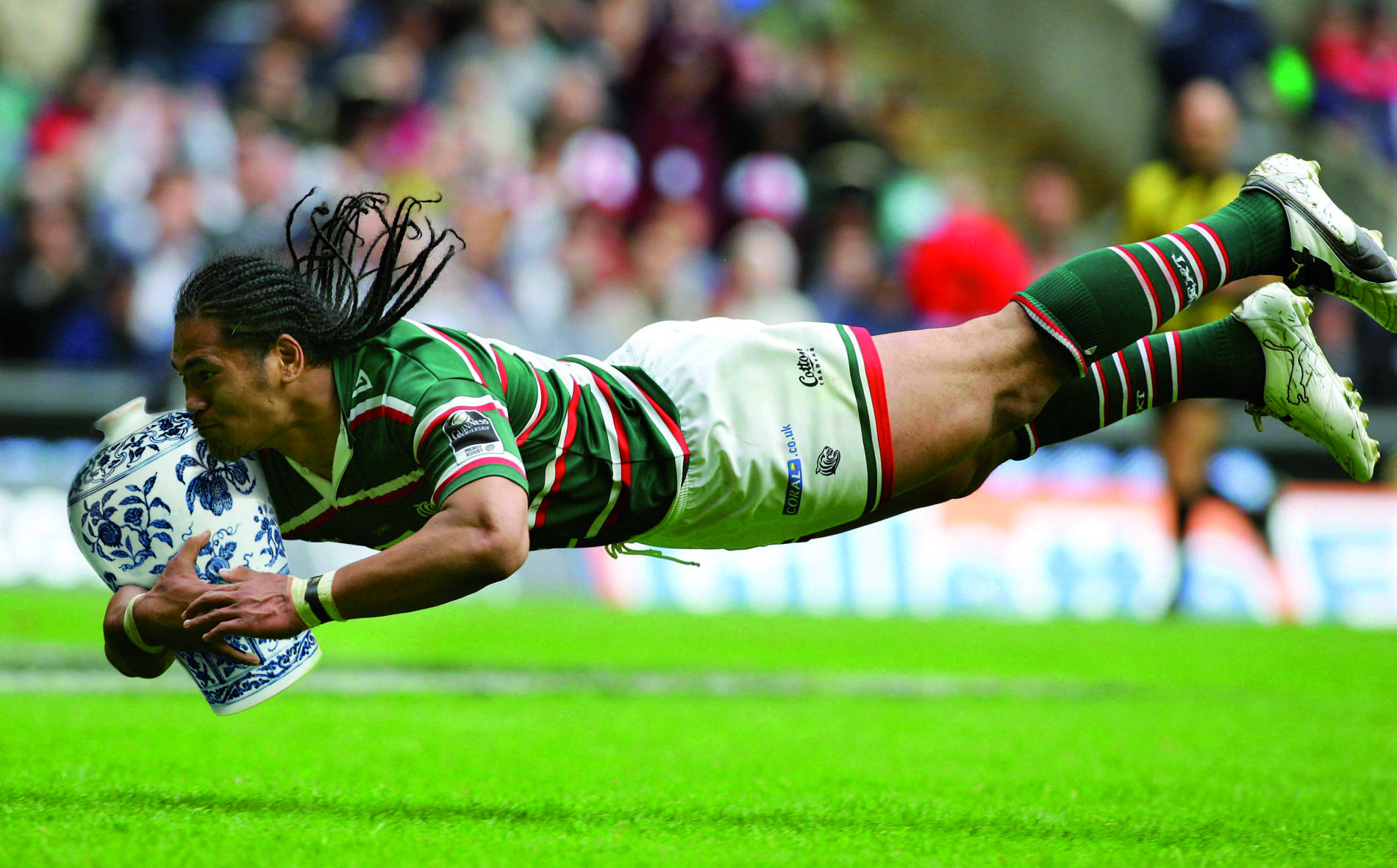 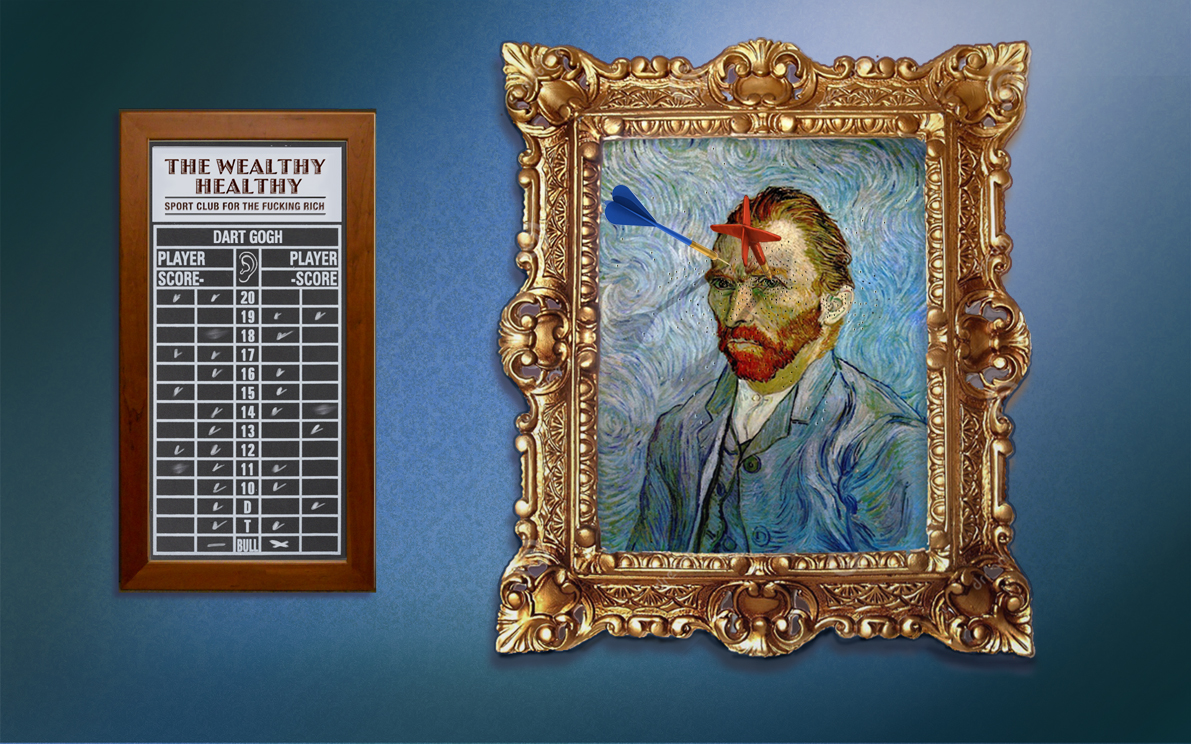 Above: Just like in any Gentlemen’s Club, the Wealthy Healthy has its own Game Room, where we placed the Dart Gogh, an exciting new sport where you play darts over an original painting by the Dutch master. You can score 20 for the beard, 50 for the eyes, and 100 for the ear. 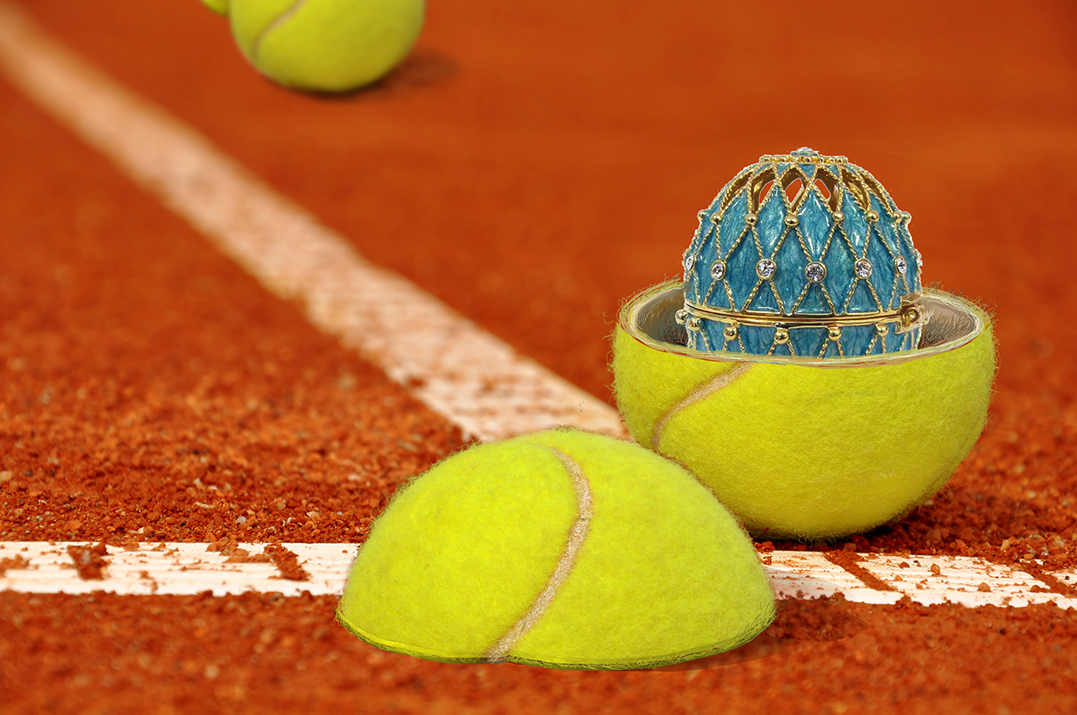 Above: Very Rich People love to play Fabergè Tennis. Inside every ball there is a priceless egg artfully crafted by the French jeweler. When the ball hits the red dirt at 120 miles per hour, the Fabergè pulverizes into a mash of glass paste, gold powder and diamonds. Below: one of the Very Rich Ladies competing at the 2015 Wealthy Healthy Fabergè Open. 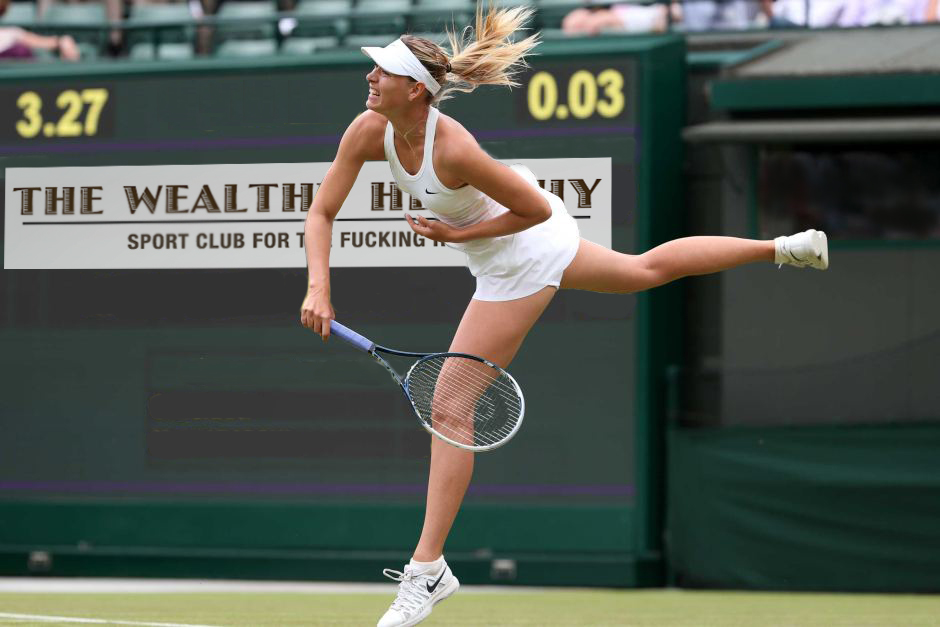 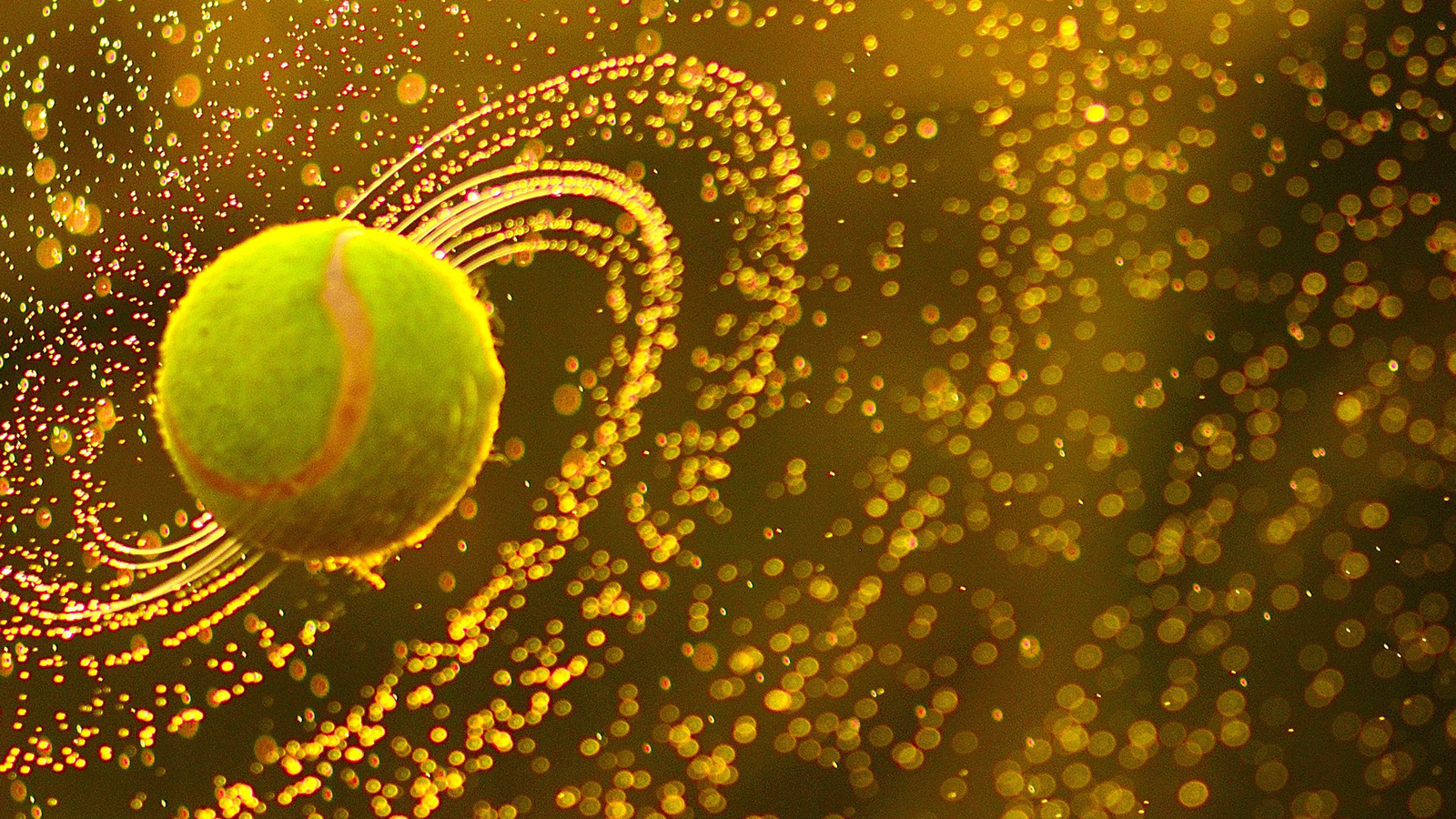 Above: an alternative to Fabergè Tennis – but rejected by the VRP because too cheap – was Furry Champagne, a variation where tennis balls are soaked into Krug Clos D’Ambonnay. 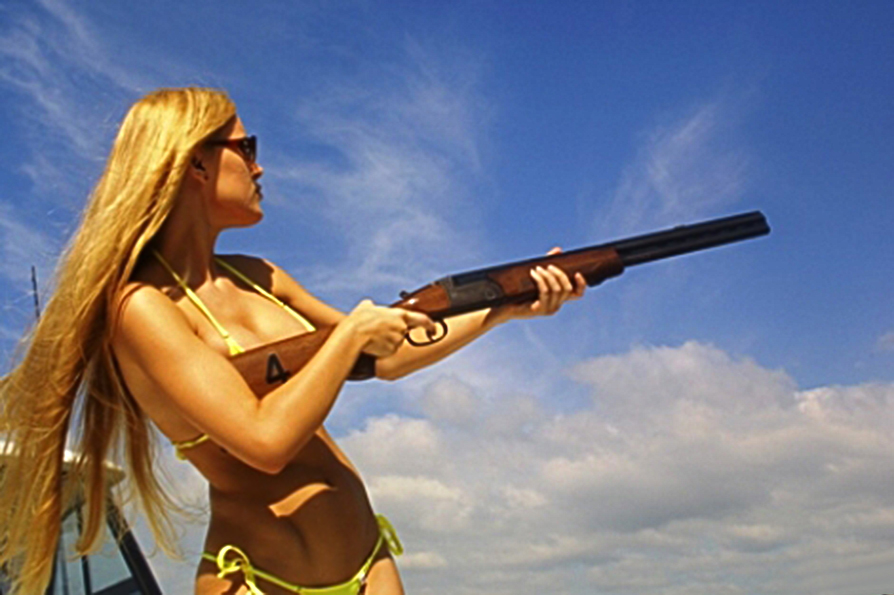 Above: Ferrari Shooting is more exciting than ordinary clay pigeons. The cars are thrown into mid air by a special launchpad which borrows the technology from sea carriers. The cars, even if not shot by the rifle, crash on the ground and can’t be used twice. They are crushed by a special scrap metal baler, and piled up to form the Ferrari Wall. 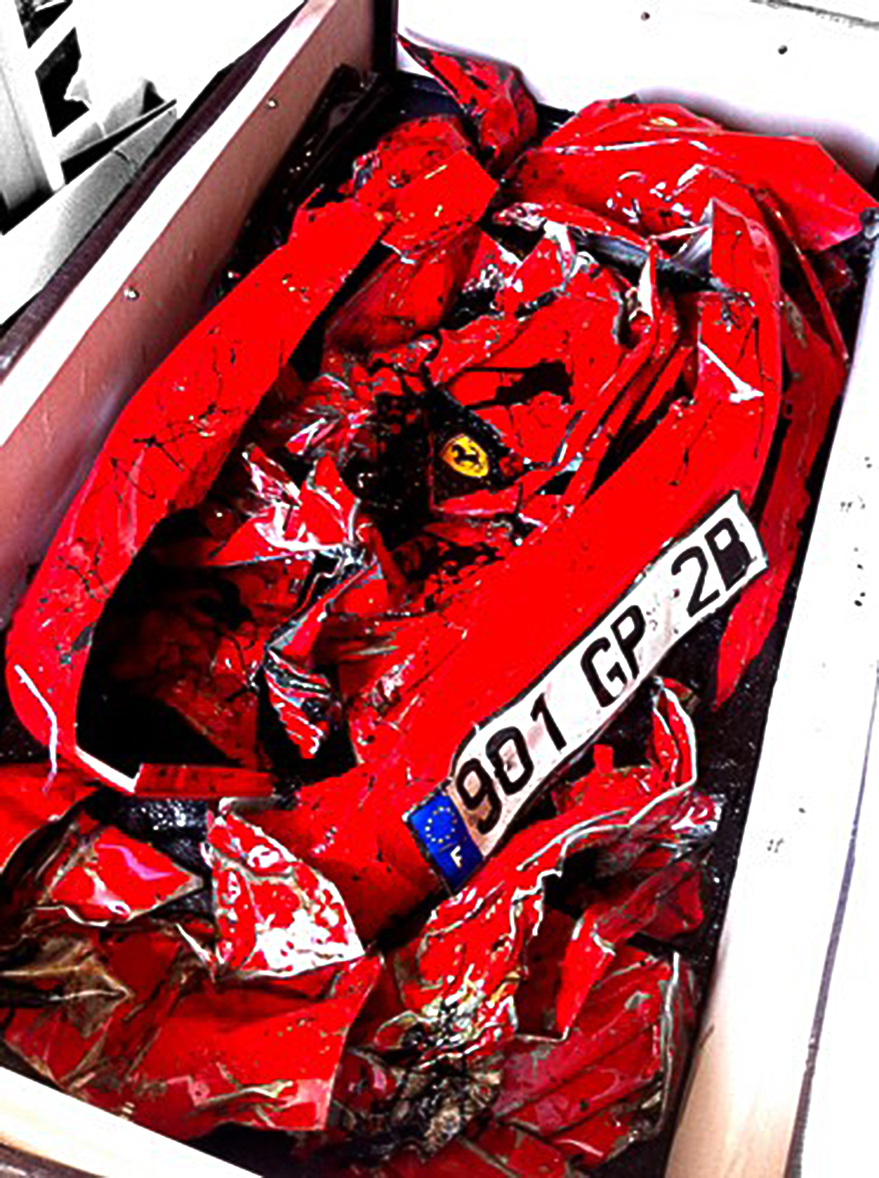 Above: the crushed Ferrari and, below, the Ferrari Wall. 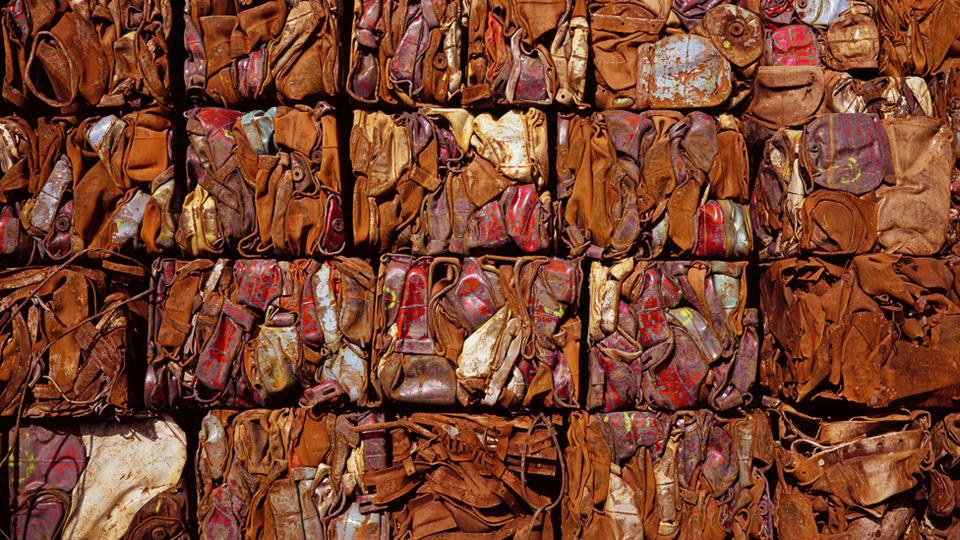