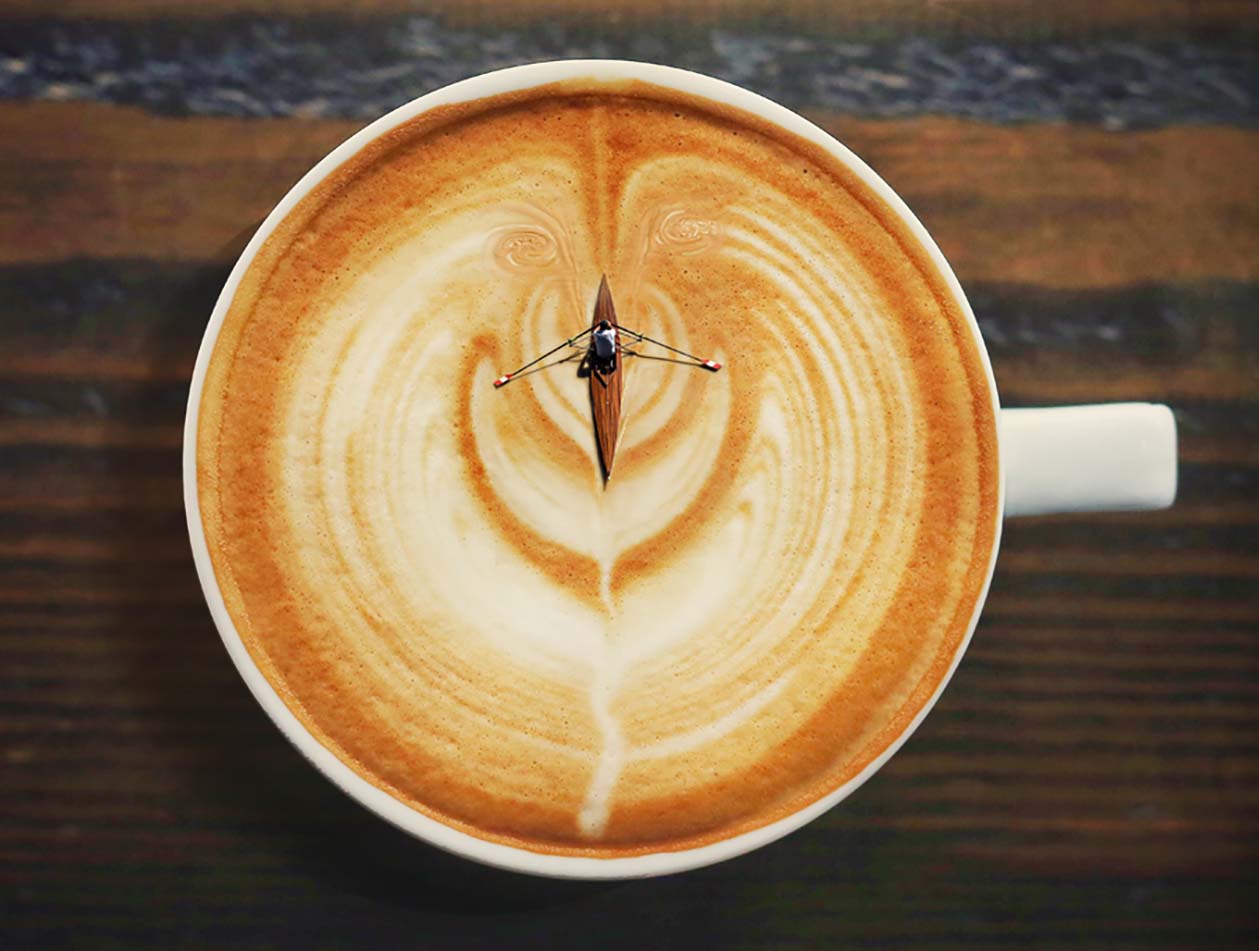 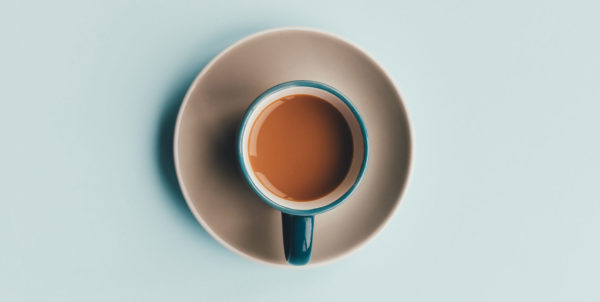 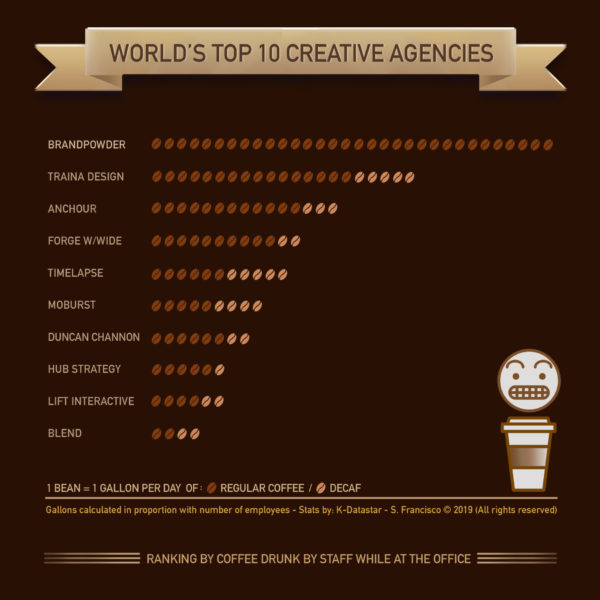 Brandpowder is famous for drinking more coffee than any other creative agency in the world. A fish tank of Colombian Brew is consumed on our premises everyday! Our ideas are so imbued with caffeine that we can’t even imagine to work without a hot mug sitting on our desk. So you can imagine our excitement when South America’s biggest coffee trader knocked on our door: Mr. Pedro Oliveira Ortiz Rozas, owner of POOR Coffee Industries. He’s a peculiar gentleman to say the least. He wears cowboy jeans tucked into hand-stitched leather black boots. An immaculate Golden Fleece shirt clashes with a pair of fashioff sunglasses. The most striking feature is his big nose, resting on a pair of soft mustaches, shaped like a Chinese pagoda. He’s a big man, filling the room with his presence, and his deep voice bears the sound of thousand cigars.

“I’ve been leading this market for thirty years, and my father before me, for forty years.” – He told us – “In Colombia we say el caballo nunca camina hacia atràs. Now it’s time to move forward and dream bigger, entiende? I want everybody  – I mean EVERYBODY! – to try my coffee and really taste the difference. Because you see, my plantations are located in the heart of the Colombian highlands where we have two flowerings a year.” 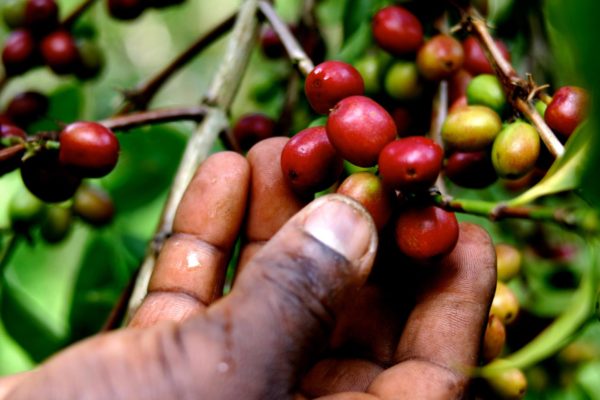 “During the harvest, every single coffee cherry is carefully inspected by my experts and only ONE out of ten is going to pass the test. Also my roasting technique is like no other. I have a secret process called bronceado, by which our coffee beans are gently steamed with mountain water and dried up on a slow fire, burning a mixture of peat and wood. There’s no game, when it’s down to quality and you have my word for it: my coffee is the Best! Guaranteed!”. Oliveira pauses for a while, sipping from a huge glass of iced water. “The POOR brand looks old and dusty, now. Many years passed by and my feeling is that it can’t convey a sense of excellence anymore. That’s why I need a new logo, and also a new name, and an advertising idea that…Boom! can get the world’s attention!” – Oliveira took out a cigar from his pocket and lit it up, blowing a cloud of smoke in the air. –  “In my usual quest for the best, I decided to pick my creative partner as carefully as I select my coffee beans. I have been monitoring your work for a while now, and I know Brandpowder’s creative reputation. The reason I’m sitting with you gentlemen, in this room, must be clear. I want you to surprise me!” 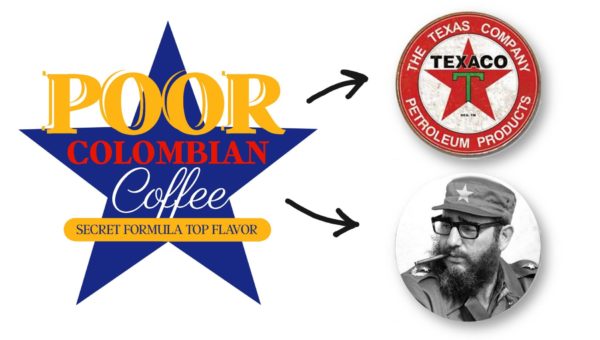 We worked hard and two months later we flew to Bogota, at the POOR Headquarters (the unhappy acronym for the Pedro Oliveira Ortiz Rozas, his Coffee Trading Company). We started our presentation addressing the name. The reason POOR Coffee never took off in the US is too obvious to mention. Yet, we didn’t want to hurt Oliveira’s feelings. We explained him the name conjured against the quality he wanted. Moreover, the blue star logo, according to our survey, reminded consumers of either some Central American dictators (54%) or gloomy Texan Gas Stations (32%). Our first step was then to invent a brand new name. 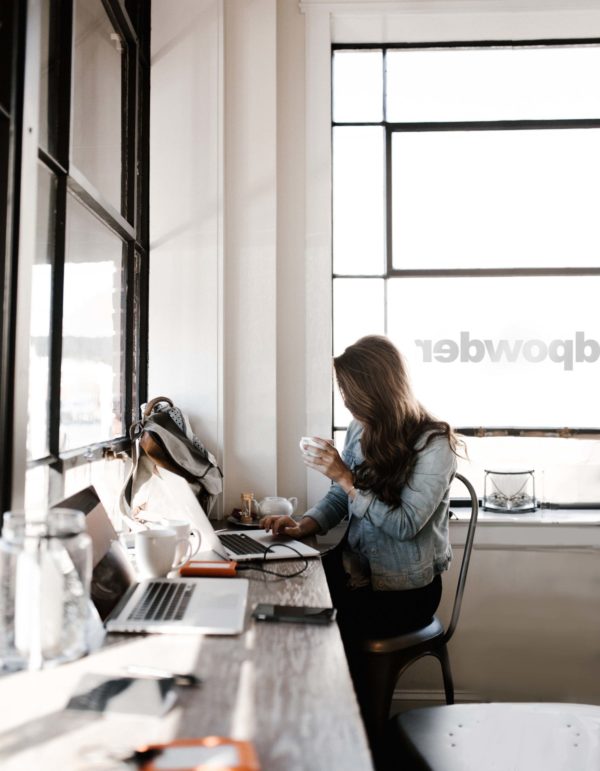 It was Jill Cobham, our junior copywriter, to come up with a brilliant solution. “The word COFFEE,” – she said – “contains two pairs of “FF” and  “EE”. How about to double up all the letters?  The word would be CCOOFFEE!”  Our client thought about it for a moment, then he pounded the table with his fist. “That’s it!” – he exclaimed. “That’s what I was looking for!”. We told him the name speaks of uncontainable energy, enthusiasm and vigor. We also told him it sounds like a breakfast call on a sunny morning, and that it smells like happiness, and that the word CCOOFFEE – above all – made you twice as charged at every sip. But Mr Oliveira stopped us. “Caballeros!” – he said, bluntly. – “You don’t need to sell me an idea twice! Let’s move on!”.

The new logo, created by Anya Vonza, a fresh talent from Budapest who recently joined Brandpowder, is simple and old style. It looks like a generic icon for coffee, one of those you find in almost every coffee shop, coffee pack or coffee machine button. It’s not a cool logo. It’s rather banal. But that’s precisely the idea: CCOOFFEE turns into the supercharged version of COFFEE. It’s like a new standard, a new benchmark in quality. Oliveira kept twirling his mustache with his fingers, a sign we learned to interpret as of his total satisfaction. Our idea of packaging was as simple. We went for a thick white recycled paper, a one-color print, with the logo highlighted in gold. Oliveira appreciated the clean design, sprinkled by a hint of prestige. 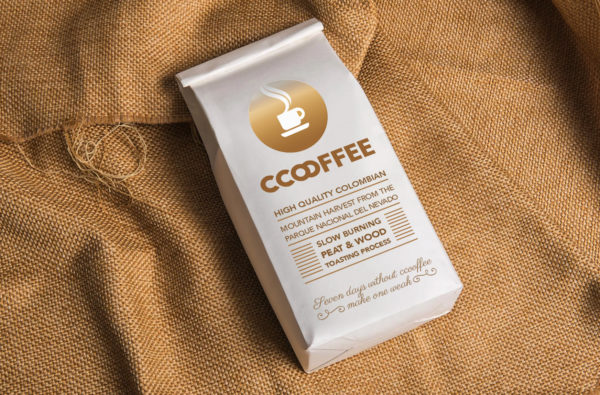 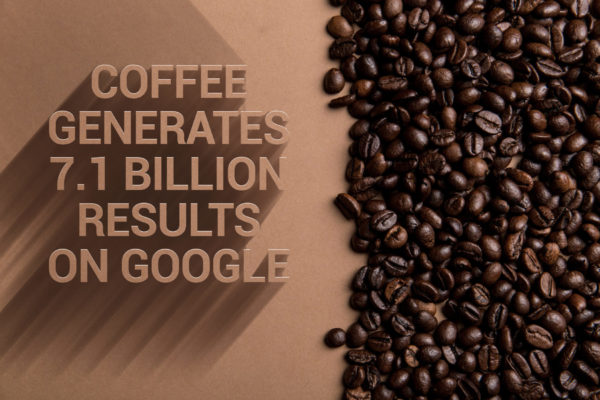 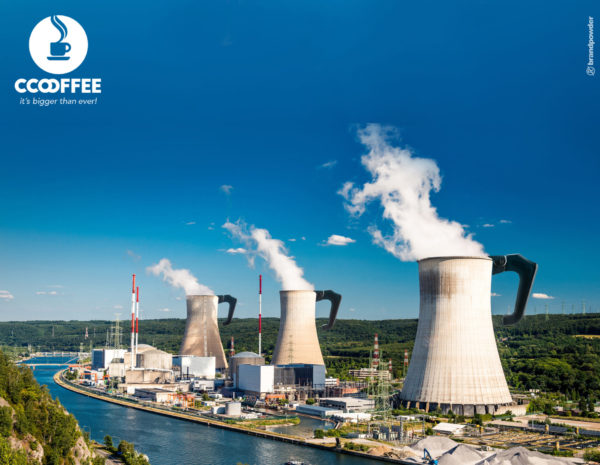 Our assignment included a campaign. We were requested to make this coffee brand look big. Bigger than anything else on the market. Our proposal to Oliveira was to go beyond the aim of a shallow advertising campaign. We based our strategy on a simple insight: coffee is a from of energy. On our vision, coffee is what makes people inspired, productive and alert. But energy, we underlined, is also a priority in Governments’ agendas, a concern among environmentalists, and sits at the top of consumers’ shopping list. Mr. Oliveira was intrigued by our idea to transform decommissioned nuclear power plants into giant coffee machines. And he ordered us to immediately step into the production phase. It was not an easy task, but we won’t dwell on that. 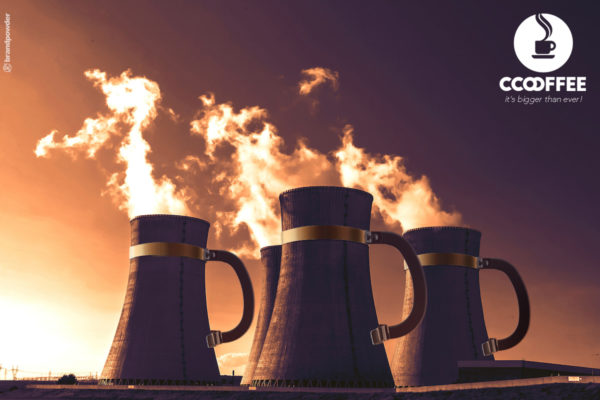 Above: the Illinois Nuclear Power Plant – can you believe it? – is now serving CCOOFFEE, Monday to Sunday, for the pleasure of thousand visitors. Thanks to this initiative, CCOOFFEE is quickly turning into a metaphor for energy, enthusiasm and enhanced human activity! This idea was more successful than expected, with a 400% increase in sales and 600% in brand awareness. 10% of CCOOFFEE’s revenues were invested into renewable energy and land reclamation. People simply loved it! Brandpowder even received a congratulatory letter from Al Gore (forgive our little act of vanity in publishing it). 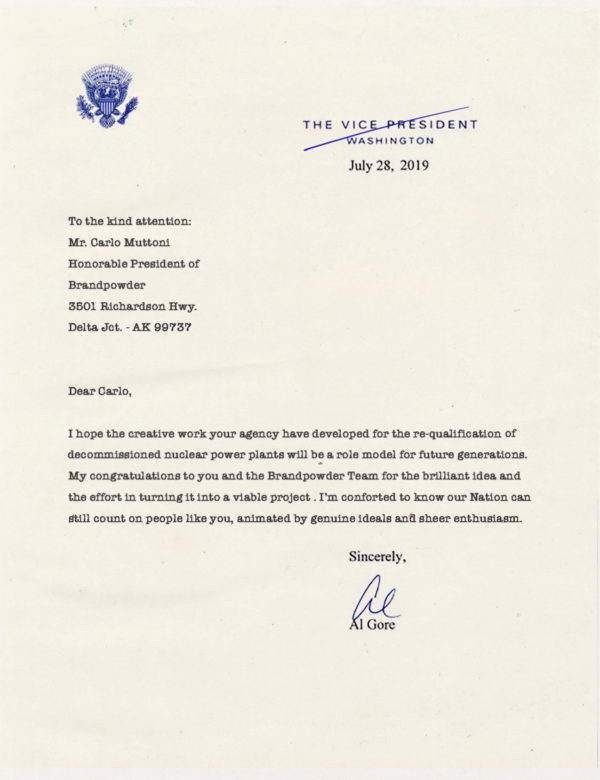 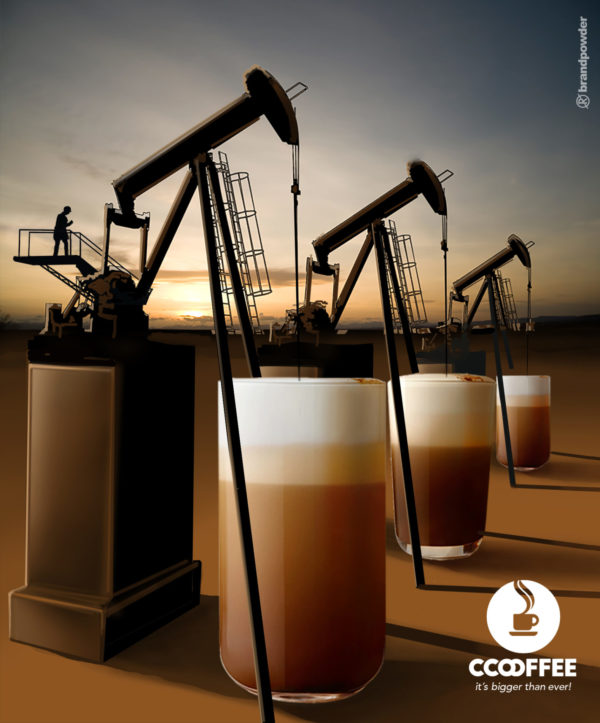 Abandoned oil wells in Southern California were converted into gigantic CCOOFFEE SHOPS where to sip Frozen Cappuccino or Milk&Coffee shakes. Such an expensive and out-of-scale operation was never attempted before. But it was a rewarding investment. Our client couldn’t believe it. He kept calling us, asking for bigger ideas. No matter how much coffee we drank, we couldn’t keep up with Oliveira’s pace. 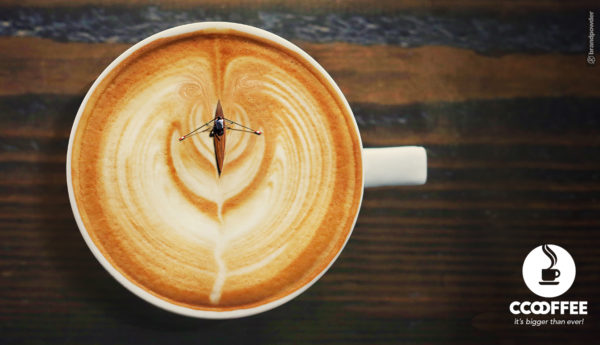 Oil is not the only rich field to exploit. Sport is another one, and it has a great potential. We wanted to expand our concept to this area, too and we talked with Oliveira about it. “People need energy when they work out. Sport IS energy. Sport requires CCOOFFEE. From rowing to rugby, from running to swimming, coffee can be the new medium where people perform their favorite activity.” 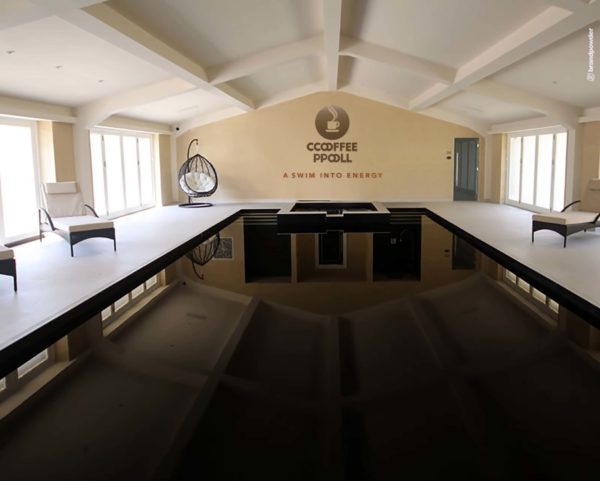 Our client was excited. So much so that he had a black coffee swimming pool built in his own villa near Santander de Quilichao, and he’s taking a swim every morning ever since. The 75 x 30 ft black tile pool has been filled with black coffee (no sugar and milk added, to avoid unnecessary filtering of the water’s purification unit). According to FDA, one minute swim, thanks to skin pores’ absorption, provides you with the same amount of caffeine of an Italian espresso. A real boost! 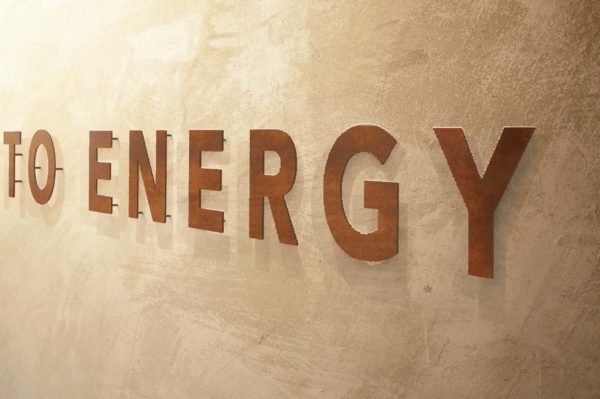 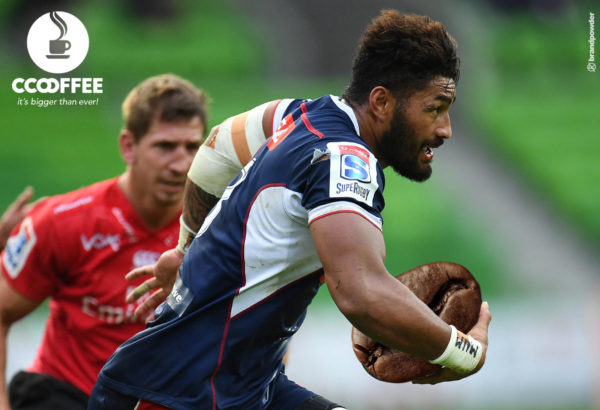 We also organized a Rugby game played with a giant coffee bean in place of the regular oval ball. It was a big hit, mostly because it showed the long-lasting creative output of our strategy. 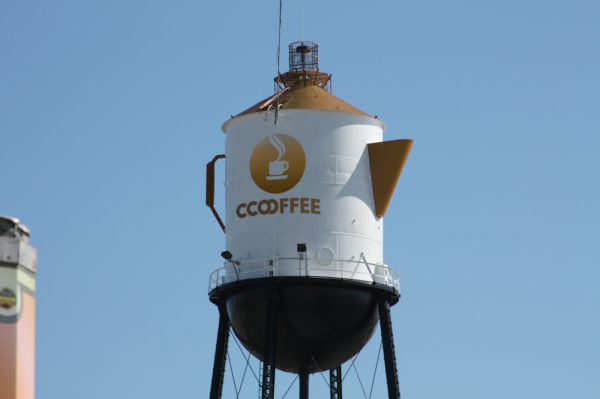 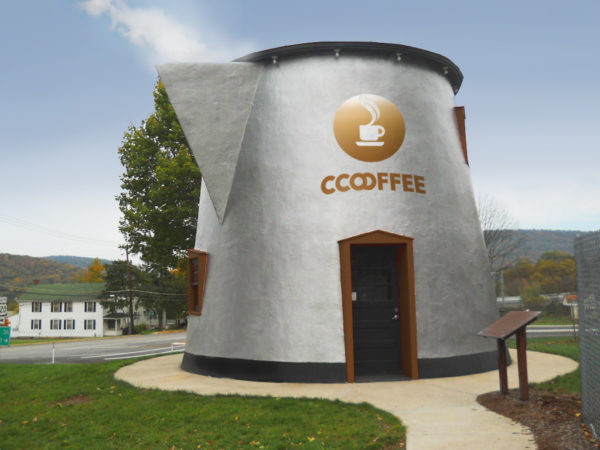 Last month Oliveira inaugurated the opening of the first CCOOFFEE sPOT. The Pot-shaped shops are intended for small towns and rural areas, away from the big cities. Around 1,500 of them will be opened by the end of 2020. It’s a cost effective, unassuming structure. It was conceived as a tacky landmark in order to fit with the mythology of a by-gone era of American landscape, when commercial activity were shaped to be immediately recognized by people. 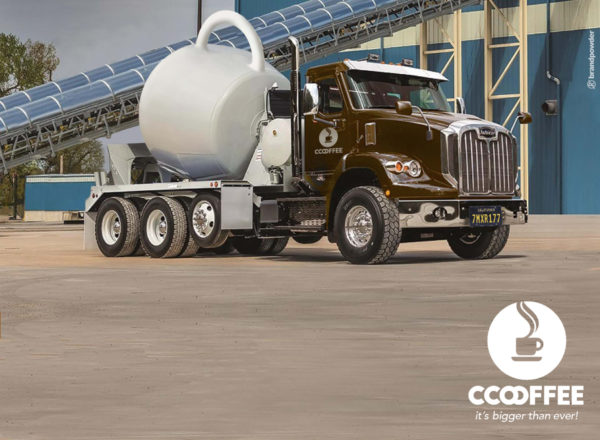 Also our COOFFEE Truck is consistent with the coffee-telling strategy! The giant white cup is a head-turning feature. People not only will look at it. They’ll smell it!  The truck is equipped with a coffee-scent spray device. The COOFFEE truck is meant not only to serve logistic purposes. It also work beautifully as a memorable advertising icon. According to American Truck magazine, it was the most photographed vehicle at the Las Vegas Show and the most posted on social networks. 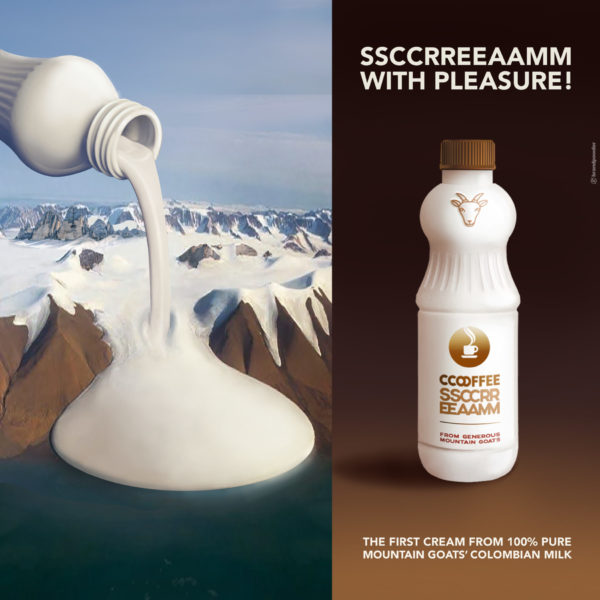 Above: The campaign for the launch of CCOOFFEE SSCCRREEAAMM. This product, within a week, went out of stock in 90% of US food stores and supermarkets. “This project just started, caballeros!”- Oliveira told us recently, at the end of a meeting in our headquarters. – “I want you to make this brand bigger and bigger. But of course, try to make your creative fee smaller and smaller!”.