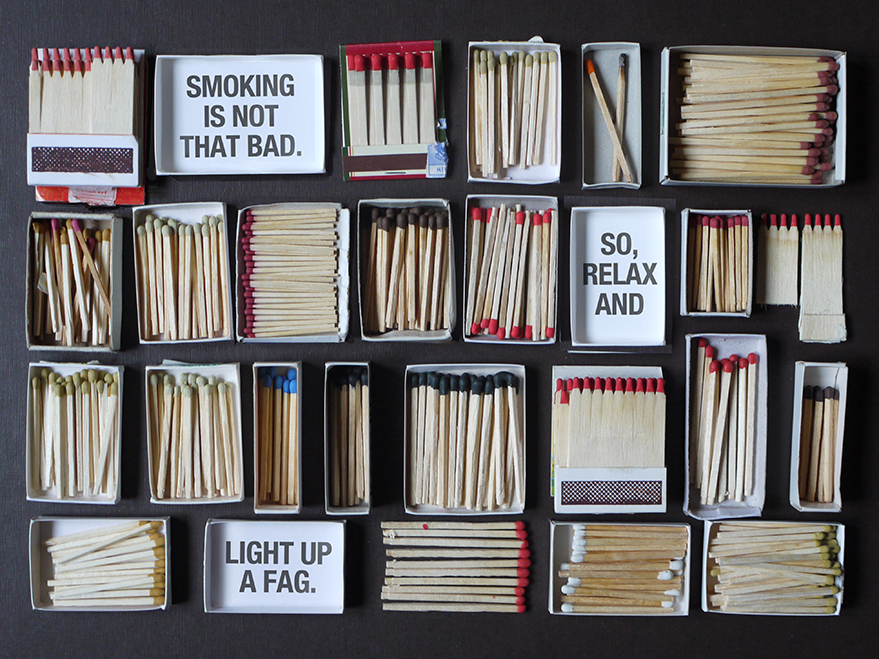 IF YOU ARE A SMOKER you’ll be happy to read this. If you aren’t, you might consider, for the very first time, to take up smoking. And if you ever forced yourself to quit in the past, please, do not hold us responsible for plunging again into your favorite vice. Addictions shouldn’t be neglected for too long, anyway.

The best stories – Chandler once said – begin with a telephone ring. And that’s what happened a snowy Saturday of December last year, when the American Smokers Society called the Brandpowder Team. We weren’t really sure to have understood it right. American Smokers Society? how could such an organization even exist in America – I mean – with that acronym! For a moment we thought it was a joke, but the voice of Paul Mony, founder and president of the association, was dead serious when he asked us to accept the assignment for a communication strategy in defense of tobacco and the holy right to smoke in peace. “We can’t afford a big media investment,” he told us. “But that’s precisely the reason I’m calling you guys: I like the way you work and I need a BIG idea!”. It was evident that mr Mony was trying to sell it as if it were OUR big opportunity but we skipped on that. We are used to work for pocket money, after all (and most of our clients are broke if not bankrupt) and in any case, we can’t refuse to work for a good cause. And defending people’s freedom to enjoy a cigarette whenever they like is one of them, even if – listen to this – 70% of Brandpowder’s staff doesn’t even smoke. [Not cigarettes, at least].

In addition to all this, it’s worth to mention we like experiments in visual communication (it’s written in our motto) and we get excited in front of a tough assignment. And this one looked like ‘mission impossible’. How could we convince people to go back to their beloved Marlboro, Camel or Lucky Strike while the U.S., in the next five years, is going to pour $600 million in anti-tobacco propaganda? (not to mention the billions spent in the last thirty years). To be honest, we never fully understood the reason behind this Congressional witch hunt, even if we accept the fact that for every single dollar spent in anti-tobacco advertisements, the US Department of Health is saving 6 bucks for the cure of smoking-related diseases. What we question is not, of course, Government’s preoccupation for the sake of the nation – health is wealth – but the ideologic fury set off against smokers.

We did, as usual, a fair amount of research on the subject and we were amazed by our findings: in our daily life, in fact, there are countless situations or risks that are much more hazardous than smoking. Why none of them has been ever mentioned to us? Why media concentrates so much on tobacco? When we turned the question to Paul Mony he couldn’t come up with a reasonable answer. We realized that most of the “healthy propaganda” is a lot of smoke blown into our face. And that’s when we came up with the creative spark: very simply, we just had to share our findings, letting people make comparisons and have their own opinion about this.

We developed a campaign borrowing photos from the alienated, sleek world of fashion, sticking real cigarettes into the mouth of beautiful models and then shooting our tridimensional composition again. For the copy part, we adopted the laconic black and white style of anti-tobacco health warning labels, pulling the leg out of their rhetoric of terror. We just wanted to offer a way to put things into perspective, and add a smile on top of that. We believe humor is the best way to make people think about a certain topic, especially when it’s related to serious matters like their well being. Another thing we did was focusing on happiness rather than health. Giving up smoking, sometimes, triggers a negative chain reaction into the body: people get depressed, put on weight, become aggressive, beat their wives and children, cause a massacre inside Mc Donald’s, they vivisect squirrels! Our point of view: don’t quit! Enjoy life, light up a fag.

Paul Mony was very happy with our creative project. He liked, in particular, our respect for people’s intelligence and the fact every message is based on scientific evidence. We never tried to pass the idea that smoking is not harmful. To a certain degree, it may be. But it’s about time people start to think with their head, and protect themselves from the intoxicating effects of mass media bullshit. 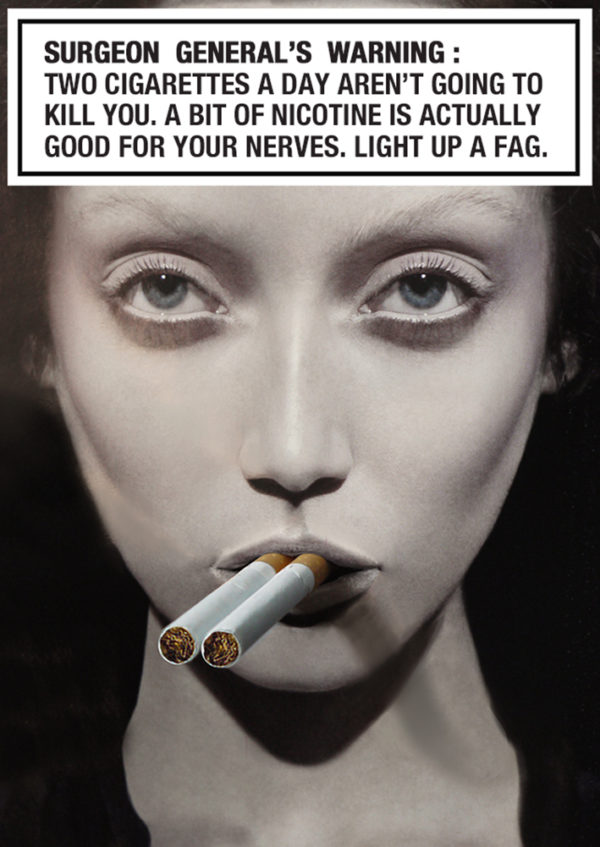 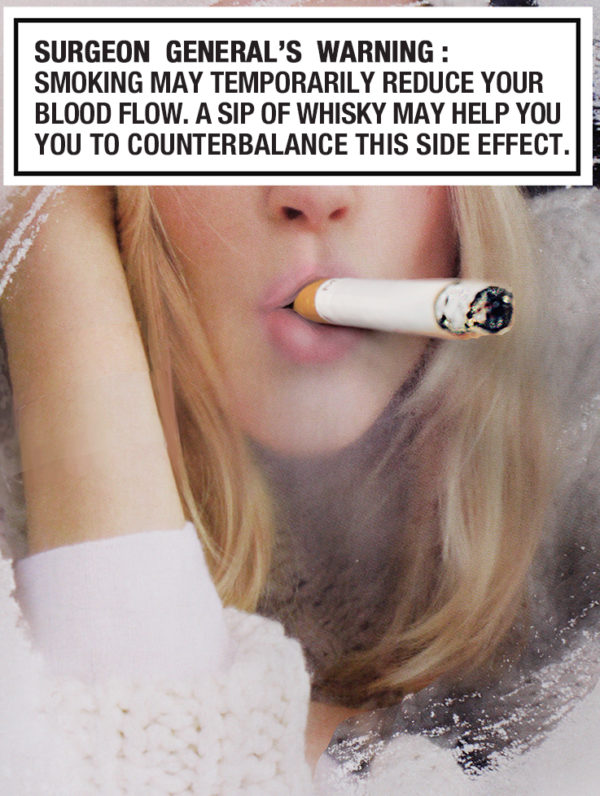 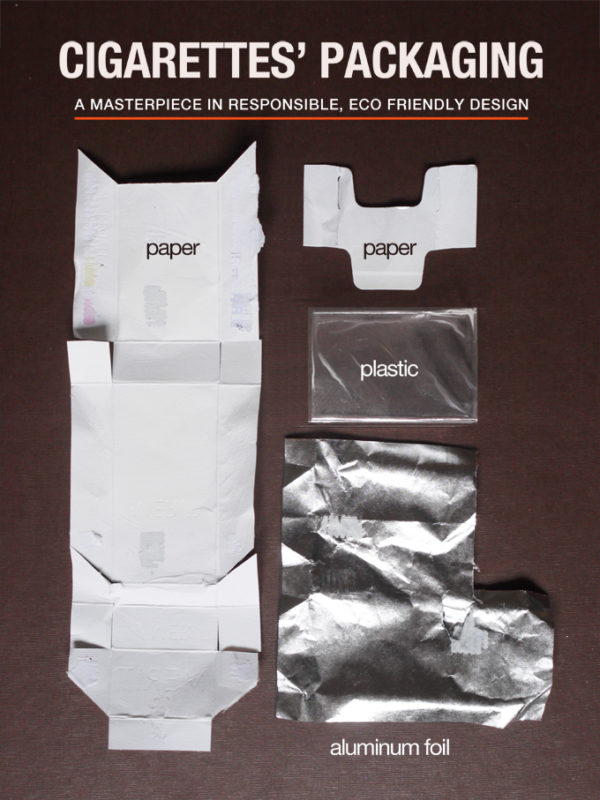 Above: Brandpowder’s ads included also some cheeky messages like this one, inviting people to appreciate the ethics behind the smart packaging of Tobacco Companies and their concern about the environment. Tobacco plants are beautiful and should be considered part of the American flora. Smoking can be a way to promote the protection of more patches of green land.

Below: a mock up that, due to national regulations, never went into production. It was in our goodwill to offer consolation to people in their worst moments. Sometimes a cigarette can help you to relax. As a matter of fact, in american prisons tobacco is a currency more valuable than money.

Above: (click to enlarge) a proposal for a poster that didn’t see the light of day. It was blocked by the Department of Motor Vehicles even if the statistics behind the message are based on the hard truth. 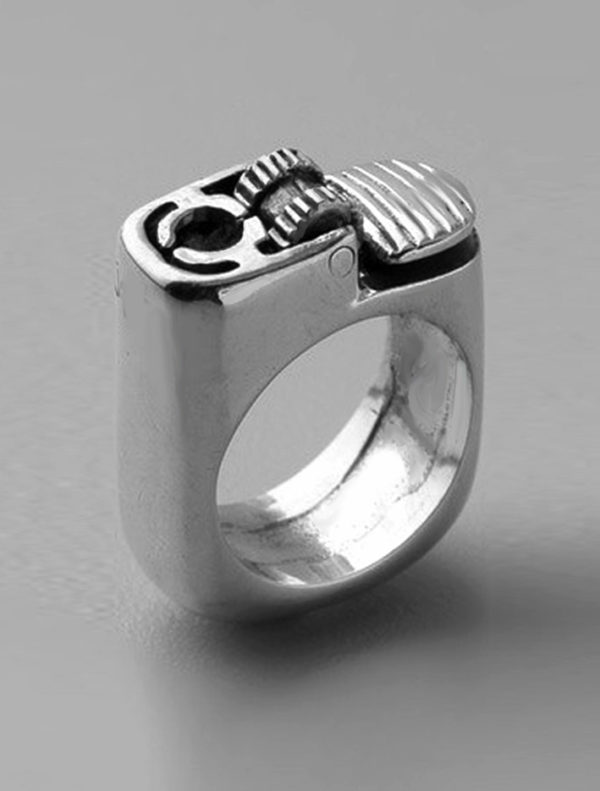 Above: “Get Married With Your Vice”. We don’t know, honestly, who developed this interesting piece of smokey jewellery but we think the “Ring of Fire” would be a nice name for it. Below: an advert about the risks of eating fish. 4.5 trillion cigarette butts are littered every year, making up for 14% of worldwide garbage. They release harmful chemicals like cadmium, arsenic and lead which rain and wind then carry into the water supply. 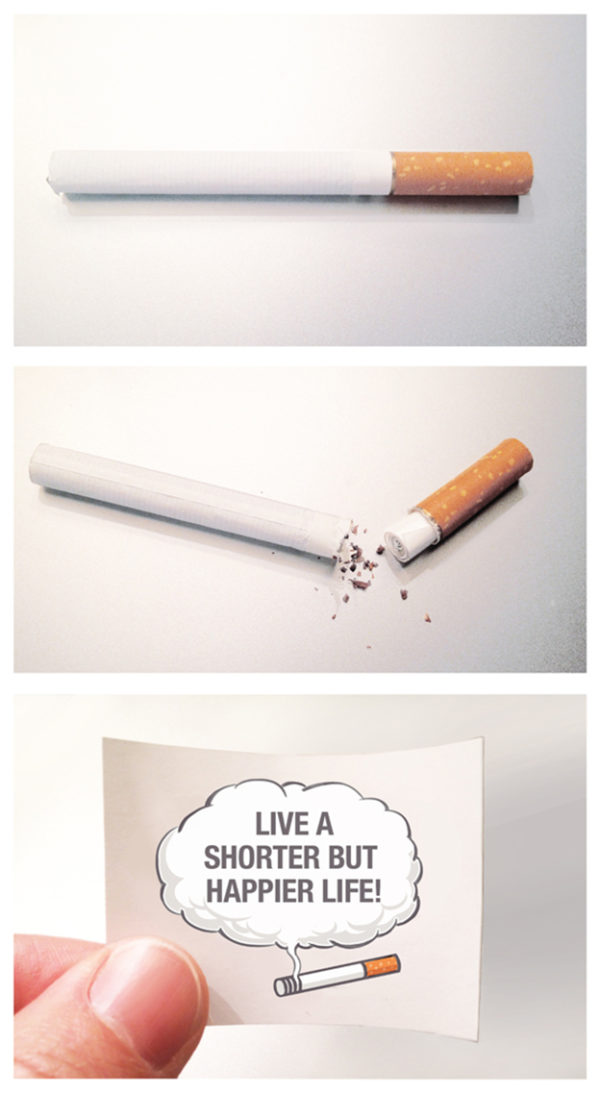 Above: Brandpowder’s version of fortune cookies. This cigarette’s butt is made of a 100% disposable filter paper, rolled tight into a funny message (our patent). It’s a smart, effective, low-cost “micro-media” that can deliver all sort of messages to a specific target.

Above: Brandpowder published a book demolishing the false truths about harmful smoking. Joseph Kinkairne, a journalist from the Herald Tribute and also a happy smoker, said that reading the book was like taking a breath of fresh air.

Below: finally, a campaign to hush anti-tobacco crusaders. Former smokers are the most vehement in their attacks against tobacco.

please visit Lauren A. Colby’s website where you can find entertaining articles in defense of smoking and the inhuman experiments made at the expense of innocent animals with the blatant purpose of  demonstrating that smoking can kill. Another interesting link to figures about the efficacy of anti-smoking communication can be found here. The BMJ Group published an interesting essay about the United States’ effort to curb smoking among teenagers. In order to reflect on your behavior as a smoking citizen of Planet Earth, you might find solace reading about the impact of cigarette butts on our ecosystem. Last but not least, Richard Klein’s Cigarettes are Sublime, is a soul-lifting book.

PS: (below) Extra Content: the Aesthetics of Smoke. a series of pictures we selected from different sources during our research. We wish to thank you every authors for his or her contribution.

our article is a polite, funny answer to the anti-smoke propaganda we are exposed to, every day. There’s scientific evidence, of course, that smoking can be harmful. But many other things, like alcohol, sugar, fats, stress, pollution, unhappiness can bring to premature death. It all depends from the amount and frequency of whatever interacts with our body and mind. Even eating 20 pounds of healthy salads a day can kill you, most probably for dehydration caused by diarrhea. We can’t bring any number or stats to support our basic idea about an healthy lifestyle, but we are with Mark Twain when he said smoking is something it would never give up to live longer. He only suggested not to smoke two cigars at the time, and not smoking while sleeping. He said so when he was 75, with 60 years spent smoking.