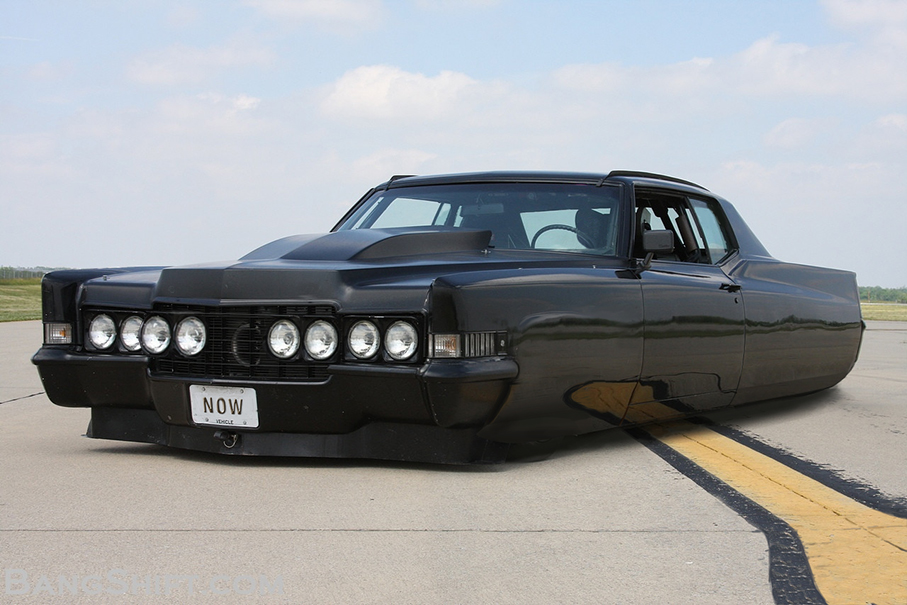 IF THIS PICTURE strikes you as familiar, you are one of the 1 billion ‘stuck drivers’ in the world. Things will get worse: traffic will reach its peak by 2030 and big cities, by then, will have more cars than paved roads to run them on. There’s no way out, and If you try to escape the congested metropolitan areas, you’ll inevitably end up on roads that don’t belong to cars, like this one beeeelow. 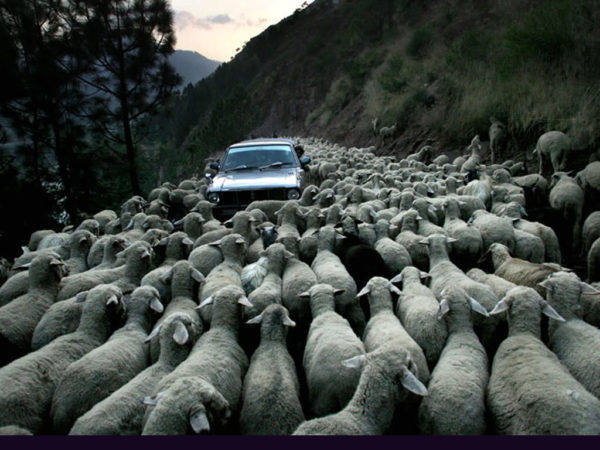 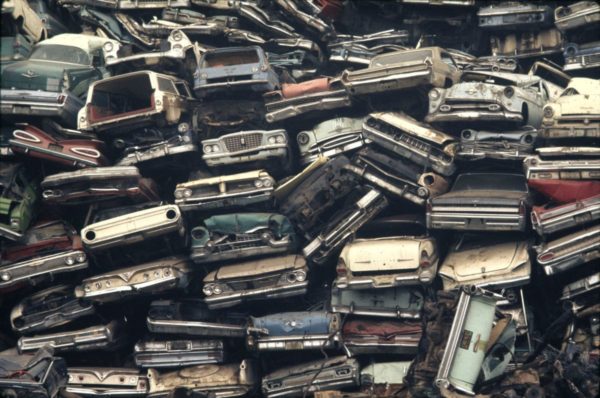 And while roads get jammed with 60 million brand new cars a year, 27 million wrecks are discarded, making up for 5 million tons of non recyclable materials. Auto salvage yards are the other face of traffic: cars, sandwiched on top of each others, are a vertical equivalent of what already happens on the road. 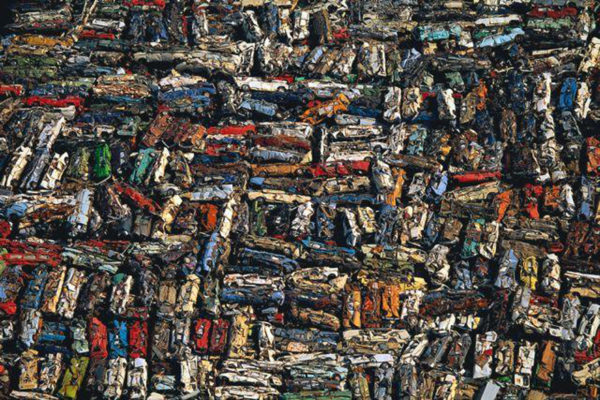 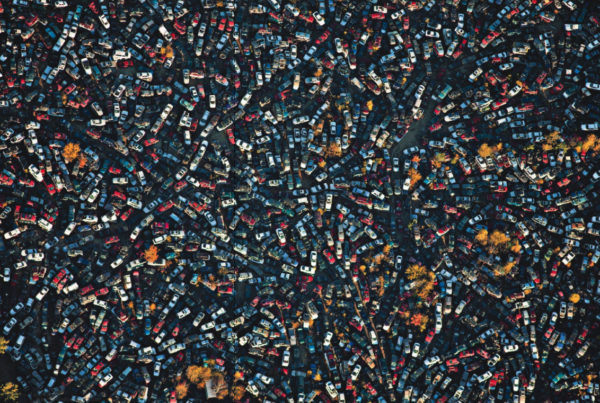 BUT NOW CHEER UP! Because you are going to find out that, once again, a good idea can save the world.

This project all began last summer when the Brandpowder Team received a call from Albert Dolfini, a Chicago’s car dealer. He complained his parking lot was jam-packed with cars he wasn’t able to sell: hundreds of them! – slowly rusting under the acid rains. His voice on the phone sounded pretty miserable but it wasn’t AT&T’s fault: “I tried to slice down prices. It didn’t work,” he said. “Then I run a few commercials on a local TV, wearing a cowboy outfit. It didn’t work. I showed up with a parrot, a camel, a giraffe. It didn’t work. I even dressed up as a cheerleader. It didn’t work either. Illinois is pretty conservative, you know. And now here I am, with hundreds of unsold cars and a bad reputation. You know how do they call me, now? The Cadillac Lady!”. Albert’s tone of voice chirped like a bird on the verge of a nervous breakdown: “the reason I’m calling is that I need something cutting edge from you guys! I want to sell these fucking wrecks before they fall apart and move my ass to Rio! I’ve had enough with all this…”

We told Albert we needed to study the car market for a few days. Which we did. At the end of our brainstorming, fueled by several pints of beer, we came up with something very silly, and since there’s no way to sell a stupid idea over the phone, we took a flight to Chicago to meet Albert in person. He was very excited and in a completely different mood: “I can’t believe you guys came all the way from Alaska! You know what? I’ll take you to Alinea for lunch. It’s the best in town.”  We jumped on his car but the traffic was terrible and spent ninety minutes to cover six miles. The restaurant was already closed. Albert apologized but the incident proved our point: cars are useless. While grabbing a hot dog on the street, we told Albert what we had in mind: “Initially, cars were designed to take people from A to B. They represented personal freedom, fun and discovery. Not anymore. Today’s cars are either parked or stuck in traffic. The automobile is slowly turning into an auto-immobile.” Our plan – we told Albert – was to change people’s perception and sell a totally new product: the NOW, a short for “No-Wheel-Car”. Albert looked at us, nervously: “what do you mean?” he asked.

We invited Albert Dolfini to sit down and forget all his previous ideas about traditional cars. First of all, a NOW is not a car. It’s something closer to a sculpture than to a vehicle. Albert froze in disbilief. You could see he wasn’t ready to consider automobiles as dead as dinosaurs but, at one point, for some reason, he got into the right frame of mind and said: “Okay, why not? I’ve got nothing to lose, after all. Let’s try!”. Two weeks later we were done with our first NOW model, molded from a beautiful 1956 Bel Air. Albert Dolfini didn’t even have the time to expose it in his saloon. It sold for 87,000 dollars! The rest is history: in six months more than eighty cars were reshaped into NOW models and quickly went to wealthy customers all over the world. 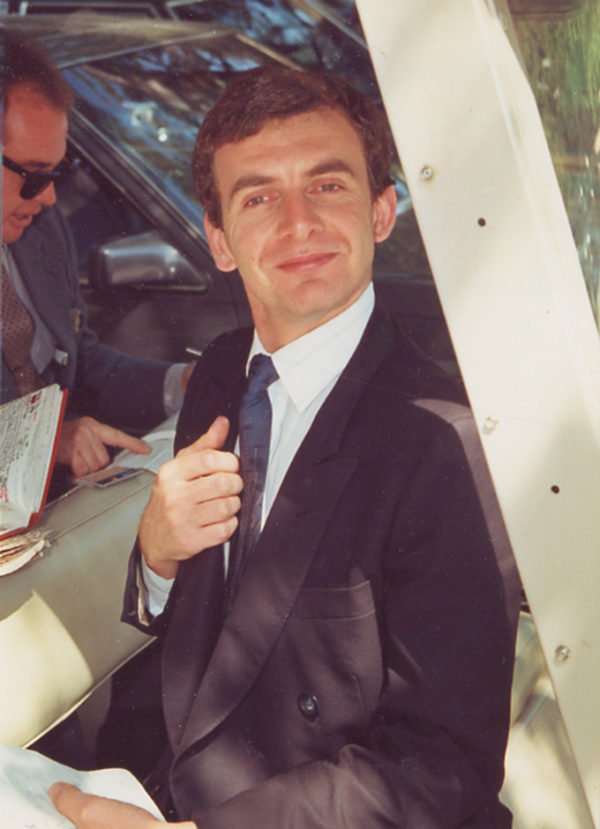 Above: Albert Dolfini smiling (he thought we were joking). In the background: Chris Nordak, our producer.

Above: the very first NOW ever produced. A 1965 Chevrolet Bel Air remodeled into a “Meeting Room For Serious Business”. Doors have been welded to the body for a more streamlined look. The only way to get into this NOW (you are not allowed to call it “car”) is sneaking through the windows. This babe sold for 87.000 dollars.

Below: the Chevrolet Bel Air, still bearing its original plate. Before being remodeled into a NOW, the car was worth less than 6,000 bucks. 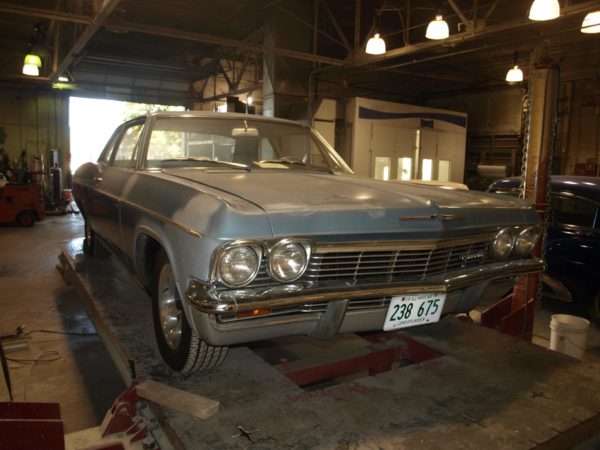 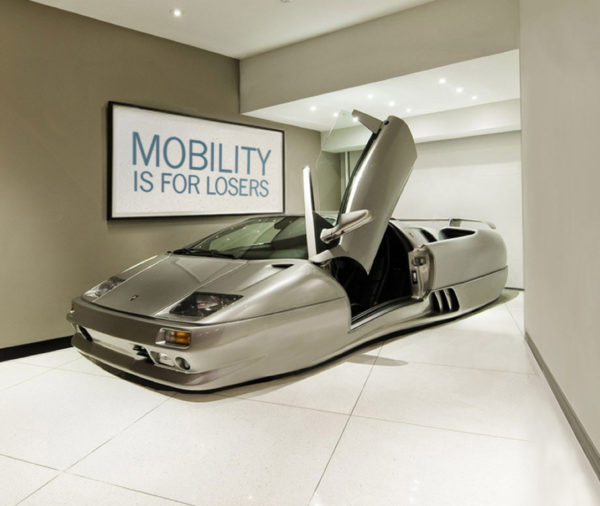 Above: our interpretation of a classic Lamborghini. It’s called “Mobility Is For Losers”. The wealthy Australian who bought it for 230,000 dollars couldn’t wait for standard delivery and had it shipped to Sydney by plane.

Above: a former 1960 Nash Metropolitan, parked inside the owner’s sleek garage which includes a couple of escalators to the ground floor of his villa. This NOW model is called “Space Traveling Ugly Duck” and fetched 35,000 dollars. 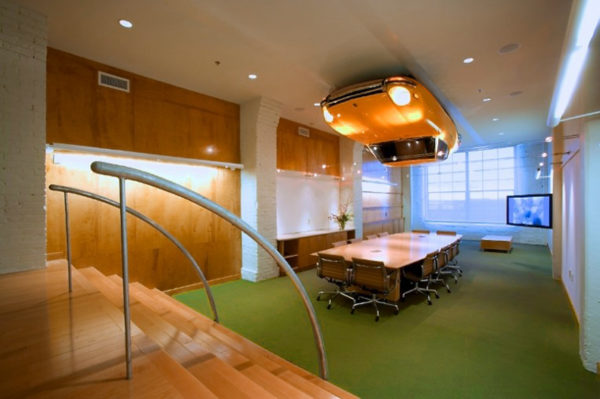 Above (literally): a wheelless Jaguar seems zooming on a upside-down highway. It’s called “Yellow Subconscious” and it was sold for 120,000 dollars to an advertising agency. 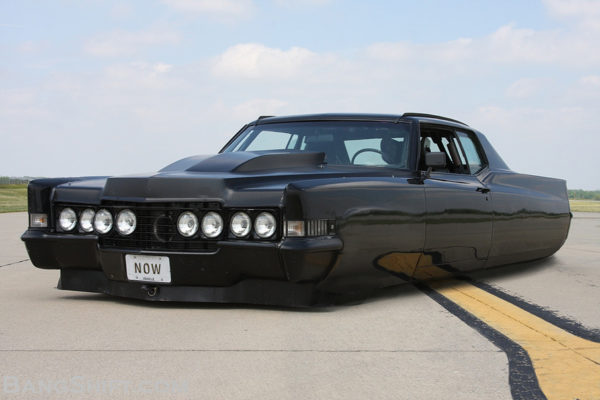 Above: the mean looking “Devil’s Toy”. This ex 1970 Cadillac Coupé was transformed, upon client’s request, into a recording studio. It sold for 150,000 dollars. 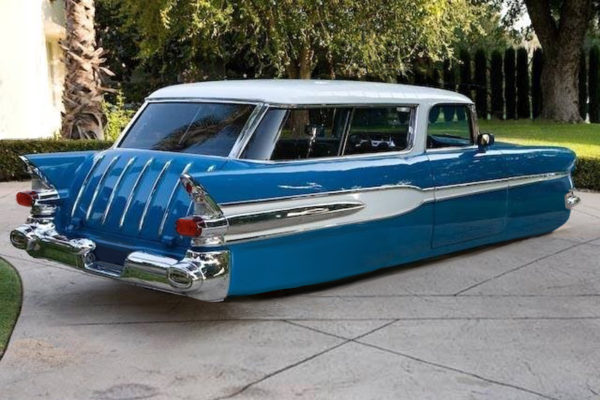 Above: we refurbished this 1957 Pontiac Safari into a luxury love room. The NOW’s owners – a young couple from L.A.-  were looking for a rather romantic name. “Let’s Have A Baby!” was sold for 95,000 dollars.

Above: a mobile column lift delivering a NOW model for the happiness of a customer in Southern France. This former Bentlery is called “Chauffeur Sans Travail” (The Jobless Driver) and its interior accommodates a little chamber de méditation, completed by a solar-powered fridge for the Champagne. Price undisclosed. 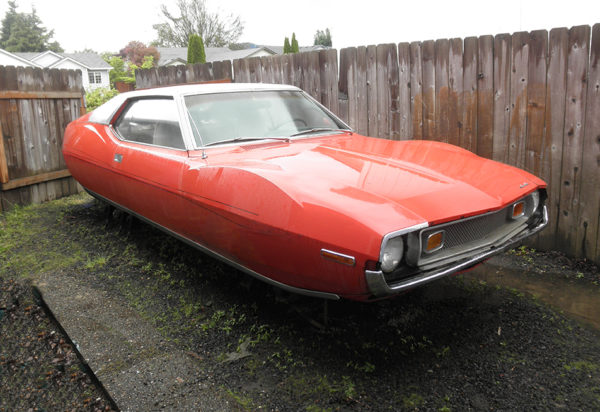 Above: The 1970 AMC Javelin’s new identity: “Even A Goldfish Can Dream of Godzilla”. The NOW model rests in Albert’s backyard, waiting for a new owner. Request: 45,000 dollars.

Above: a French client asked us to turn his old Renault 4 into a NOW. We had to scrape the rust off before reshaping the car’s body into a work of art. To sneak it inside his loft in Paris we had to take down two windows and destroy part of an antique facade. Below, the final result: this NOW model is called “The Tax Man Will Never Catch Me!”

The very British 1968 Reliant Regal Supervan turned into a turquoise NOW model. This one, called “Screw it!” is the most affordable sculpture to date. For just 13,000 dollars you can park this beauty in your garden.

Above: the 1964 Fiat Bianchina remodeled into an original NOW model, called “Cinderella Is Not Afraid Of Midnight”. The italian owner proudly parked this little beauty at the entrance of his mansion in Puglia. The car’s tires were recycled for the amusement of his dog, Pippo (below). 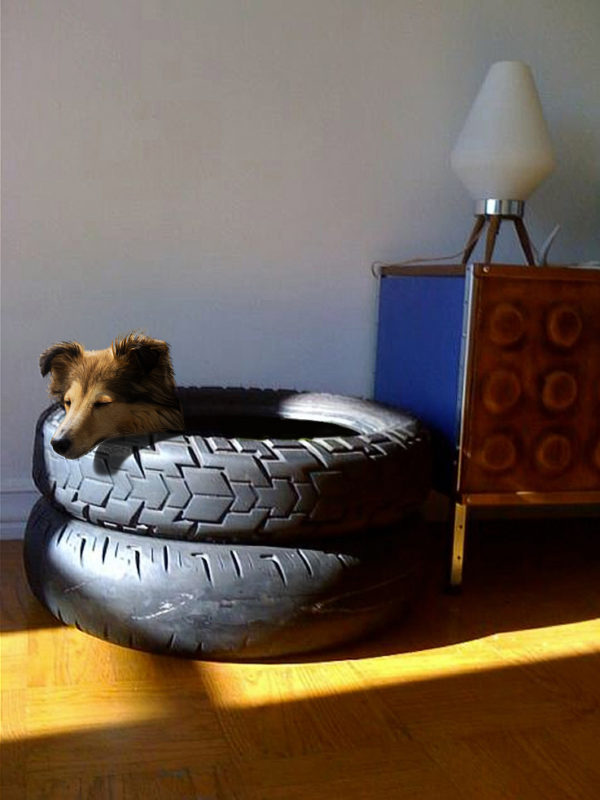 The NOW project is not only converting cars into sculptures, but also producing a series of useful and unusual objects. Not a car’s screw is thrown into the bin because Brandpowder’s business plan is based on “creative total recycling”, a process where all materials find a new purpose. Above: a Ferrari Coffee Table is perfect to boost adrenaline into your veins (2,550 dollars). Below: “Dog Tyred”, the perfect chair to watch Formula 1 on TV (900 dollars). 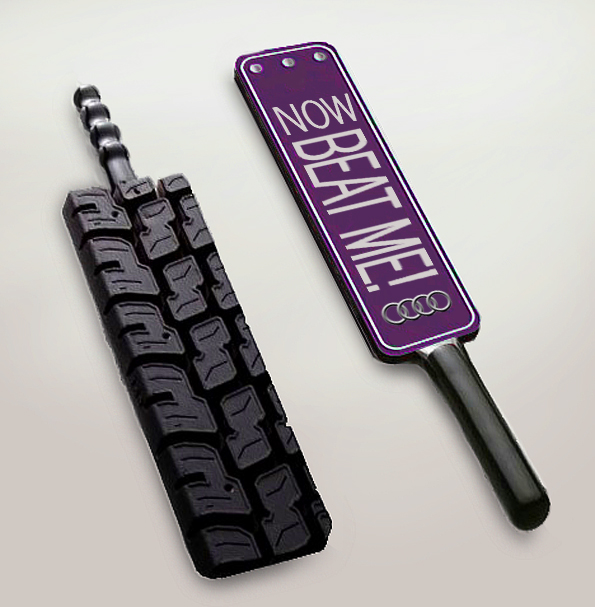 Above: A German customer wanted us to find an alternative use for his Audi’s rubber parts. His car tires were cut and transformed into spanking boards. This article, later, became a best-seller (160 dollars). 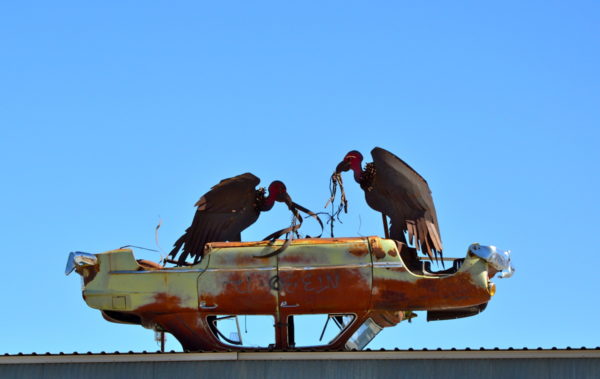 We hope you enjoyed this story. We are currently at work on new, exciting projects we hope to publish soon on our website. When you have a minute, please drop us a line and tell us what you think. Your opinion is gold to us.