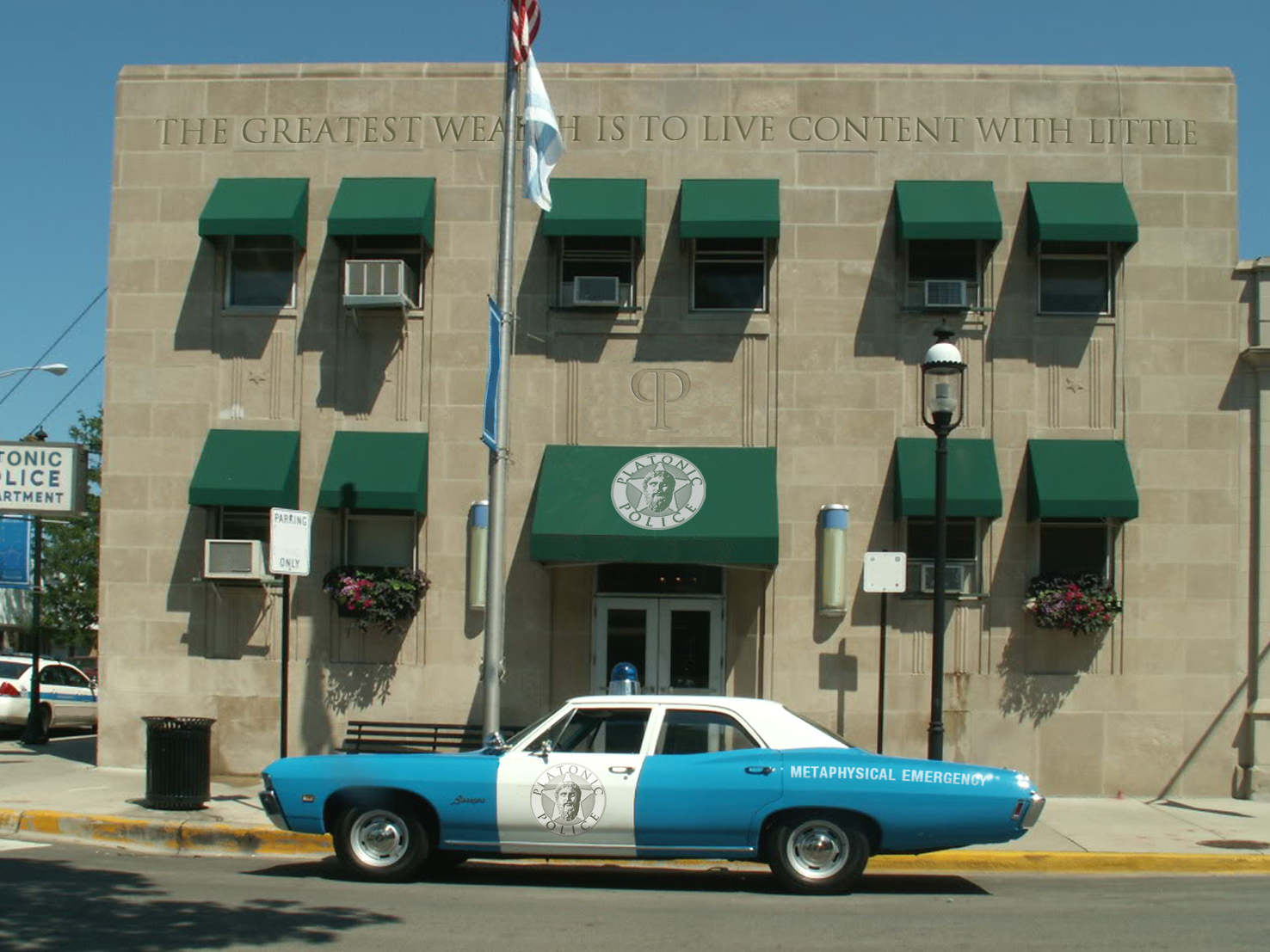 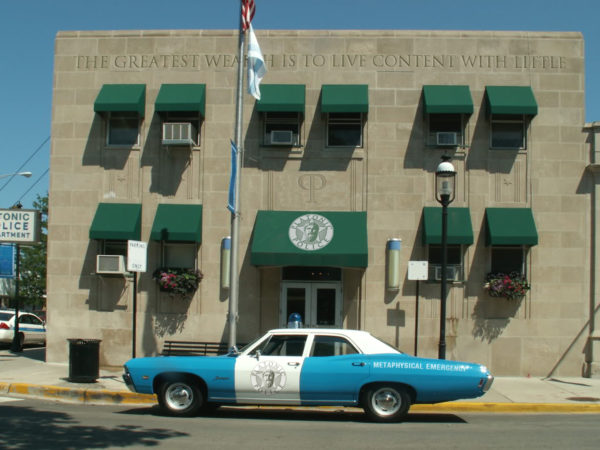 “This is totally crazy!” – that’s what we were told when we first presented our project to the Board of the Police Department of New York City, back in 2003. “How did you come out with this idea, for a start?” – they asked. We explained them our intention was to create a new Police Unit to help citizens in sorting out nonmaterial issues. Crime fighting – we told them – should focus on metaphysics, since people suffer more from spiritual loss rather than from material one. Traditional police, in a nutshell, defends just material property, both public and private, and punishes whoever try to steal or damage it for his or her illicit personal gain. But what about all those fundamental human needs that go beyond materialism? Shouldn’t we protect them, in order to promote another kind of value, namely all Traditional Values? The Integrity of the Soul, The Wealth of Love, The Treasure of Memories, The Richness of the Spirit: aren’t all these a metaphysical currency?  Our proposal to the big shots of the Police Department was to add a new division called the Platonic Police. The name – we said – was a tribute to Greek philosopher Plato, the first one who seriously investigated the nonmaterial essence of human beings and later taught to a young Aristotle the basic principles of modern metaphysics. Our project didn’t require big investments: its objective was to reintegrate retired police officers who, instead of rotting at home in front of a tv set, could go back to the thrill of action, adding also a little salary to their skinny pension. Their invaluable experience could serve a good cause. We proposed to use old, discarded police vehicles, properly restored by car enthusiasts supported by private micro-donations. Our idea, at heart, wanted to give a double social message to all citizens: make them understand and value the nonmaterial side of life, since existence shouldn’t be based only on money and success. The other input was to lessen the social burden of neglected old people, re-introducing them into the social tissue, making good use of their wisdom, selflessness and experience.

After a long debate, we were able to convince our audience. Our first meeting with the authorities was in 2003. Today, almost ten years later, the Platonic Police is a sound reality we are all proud of. It counts 6,000 active officers only in the U.S. and many affiliates are joining the cause in Canada, France, UK, Germany, Japan, Brasil, Chile, Russia, Iraq, India, Nepal, Thailand, Australia, New Zealand and, of course, Greece. The Platonic Police is formed by an elite of volunteers from all over the world.

Opening picture (top): the Platonic Police Headquarters in Chicago. On top of the building, one of the most popular platonic mottos has been carved into stone: “THE GREATEST WEALTH IS TO LIVE CONTENT WITH LITTLE”. 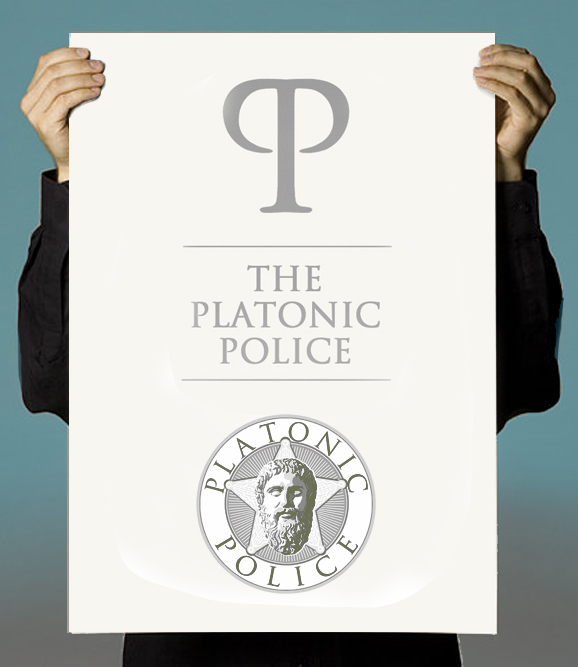 Above: The Brandpowder Team has developed a full corporate identity: the double “P” mirrors into an ancient runic symbol that stands for a “journey through force”.  This ieratic image is adjoined by the Police’s emblem where the face of the Greek philosopher Plato is inscribed inside a circle with a bright sheriff’s star. The five-pointed star, quite popular into American Heraldry and iconography, was selected by the Brandpowder Team for the Pythagorean pentagrammatic perfection, an original manifestation of metaphysical force that is found also in ancient Bahà’ì faith.

Above: one of the pages from the Brandpowder’s Sketchbook. Pluto, in our view, is the corrupted symbol of dumb plutocracy promoted by mass media. Its apparent jolly, cheerful, carefree nature hides the poisonous message of a dog subjugated by the childish caprices of a capitalistic rat. Plato, on the other hand, represents the aristocracy of the soul. Aristocracy, in its original meaning, meant the power in the hands of the best people. The Greek philosopher was unanimously voted by the Brandpowder Team as the keystone of a philosophy for a new, ideal city. We added the greek word “polis” to Plato, and the Platonic Police was born.

Below: the Platonic Police’s rubber stamp is used to seal every solved case, at the end of a metaphysical enquiry. This is a very reassuring symbol for the people who are growing fond of this institution. The Platonic Cops are considered like guardian angels serving the Community. 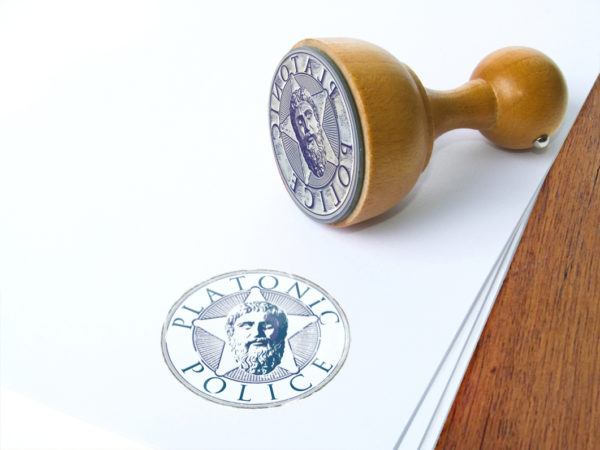 Below: The Brandpowder Team was later asked to create a social campaign to raise public awareness, also explaining how the Platonic Police could really help people to find a solution to nonmaterial matters.

Below: a soul-searching ad promoting the activity of Platonic “bobbies” in UK. 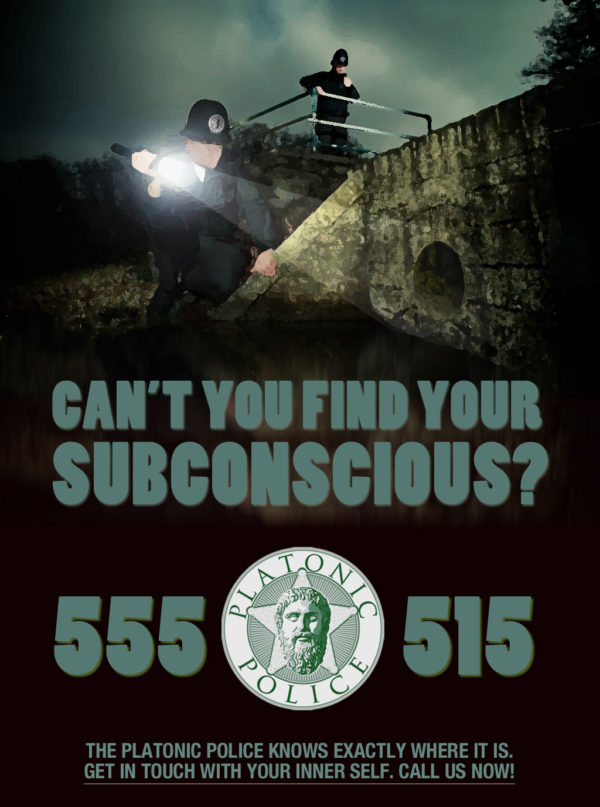 Above: another ad run by the Platonic Police in Texas. “People are very much concerned by time, which is now considered the new currency,” – Sgt. Tom J. Forbes told a local paper – “It’s strange nobody ever thought to protect it, before. I’m proud to represent the Platonic Police and help people to get their time back. This is a bloody good way to serve my Country.”
Below: an ad that appeared in several High Schools throughout the Unied States. Love is a critical issue, among teenagers. The Platonic Police helps youngsters to deal with the soft turmoil of their feelings, teaching them sex, for instance, shouldn’t be separated from love. And viceversa.

Below: the French Gendarmerie offered a fleet of six vintage Citroen SM to the Platonic Police. These cars are extremely fast and comfortable, which makes them the ideal vehicles for quick response and intervention. Jacques Milieu, Head of the Platonic Police in Paris, said materialism is ruining his Country. We are grateful to the Brandpowder Team for making this utopia come true.  We are all fighting for a better society. People should finally understand that life is much more than smelly cheese, champagne, trufles and parfumes. 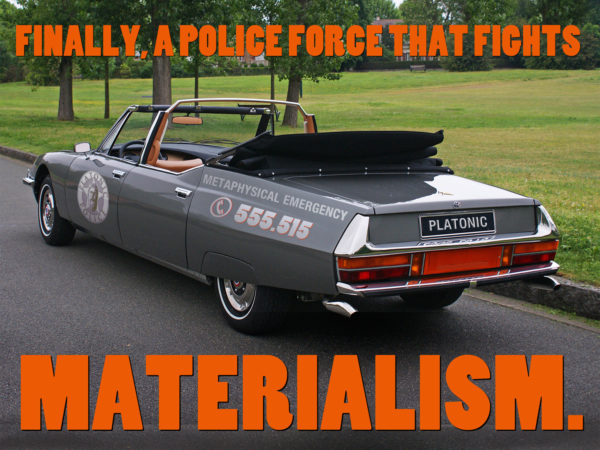 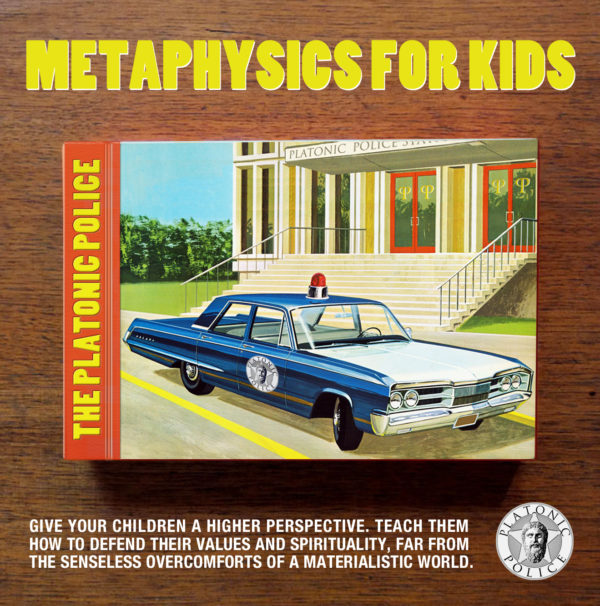 Above: The Platonic Police is proposing also “early tools” for helping parents to raise their children with real values. The PP Handbook is a learn-through-fun publication translated, so far, into 17 languages. The Brandpowder Team is currently at work on a new book. People asked us why not a digital version for iPad or an app with a geo-locator that tracks emergency calls on the map? The reason is we don’t like digital tech. We think the Platonic Police should stick to old fashion relationship with their fellow citizen, instead. You can’t hug a person through an iphone, can you?

Above: an old Platonic Police cruiser in Canada. Days can be very quiet, here. When there are not emergency calls, the Platonic Cops just hang around patrolling the streets, stopping sometimes for a cup of tea. People love them to bits and invite them into their homes to have a chat.

Below: The Platonic Police of Germany couldn’t resist to give their vehicles the usual “panzer” look. This old Volkswagen T1 has been transformed into a snow cat. Metaphysical dilemmas, according to local statistics, are more frequent during the winter season because snow, with its white blanket, can induce gloomy thoughts promoting metaphors of death. 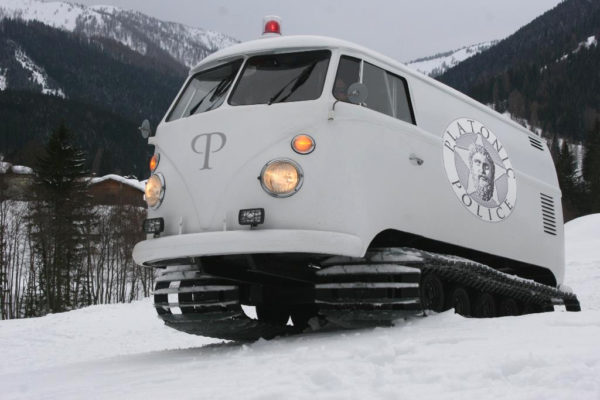 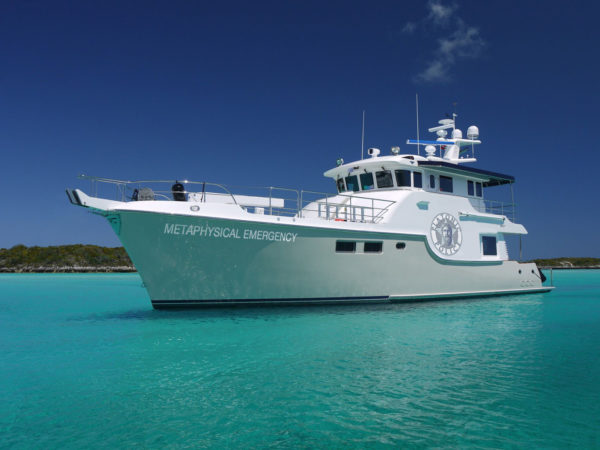 Above: this yacht may seem a blatant oxymoron. How come the Platonic Police, who is supposed to fight materialism, is indulging with such a loud symbol of it? The answer is quite simple: the fancy boat was a donation from a Greek millionaire to the Platonic Police serving in the Aegean Sea. Metaphysical emergencies are more frequent than you may think among the filthy rich. This floating dreamhouse is the most convenient way to approach such people, making them feel comfortable during their existential crisis. 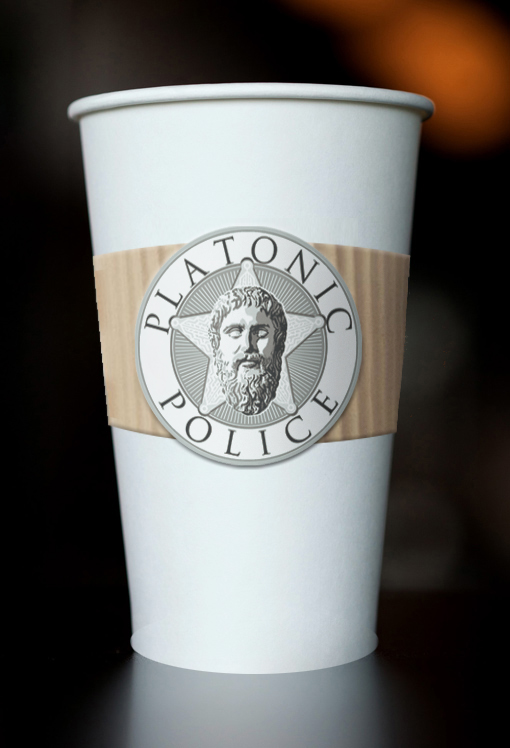 Above: A nice cup of coffee is always waiting anyone who happens to stop by any Platonic Police office. The California District also serves delicious star-shaped cookies called Plato’s Chocolate Fudge.

Above: Leon Panetta, former US Secretary of Defense, awards Liut. George Ruanan, Platonic Police’s coordinator on behalf of the Brandpowder Team, the Medal of Honor for distinguished service and the spiritual improvement of Society.

Please support the Platonic Police by spreading this message. A big thank you from the Brandpowder Team.

A job well done by Brandpower!

Thank you Don!
We now hope to make the Platonic Police a reality also in Italy, Sweden, Turkey and Mongolia.
The BT

Thank you very much for your support.

carloreply
– In reply to: Doriano

Thank you Ezno for your dry comment. But wasn’t Socrates a football player? 🙂

Enzoreply
– In reply to: carlo

No Carlo, he’s a billiard player!

carloreply
– In reply to: Enzo

Yeah, right! And I bet he drinks conium instead of beer.

Great Thinking. The Platonic Police in Italy would be great to claim back the real essence of being a decent country where decency has been stolen by appearance and materiality. We could also introduce Platonic Jail where to put clowns and commediants not anylonger capable to think or to act.

Holy words, Mr R,
thank you for your heartfelt comment.
the BT

carloreply
– In reply to: Mike

Thank you Mike,
the world is full of wonder.
The Brandpowder Team.