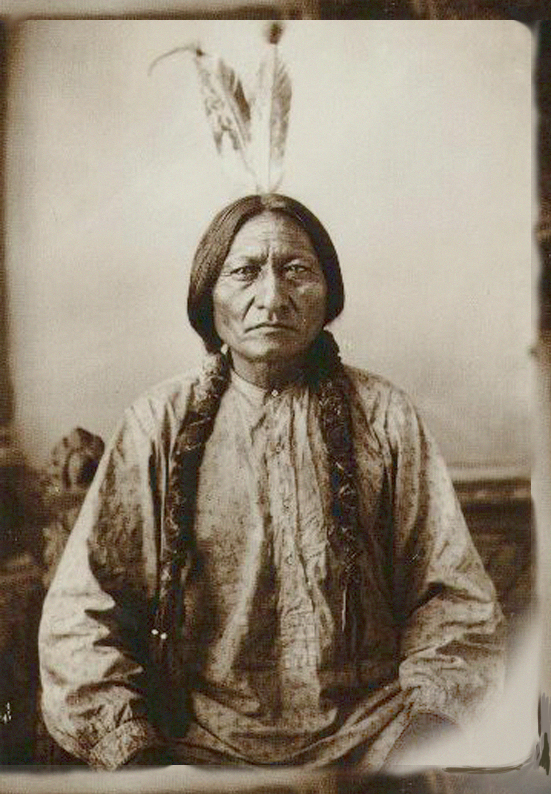 “White Man, you think to be better than a Red Man, Black Man and Yellow Man. But your skin is the color of worms, and soft like the belly of a blind mole.” Verses written with the Indian technique of smoke signals by the Sioux Chief Sitting Bull in Ohio, 1849.  (from the book “The Burning Soul”)

People think Sitting Bull didn’t leave anything written because he was an analphabet. Nothing could be further from the truth. The Brandpowder Team was recently invited to South Dakota by Pink Cloud, the grand-grand-grand nephew of Sitting Bull, who wanted to tell us a beautiful and quite incredible story about his beloved ancestor. Everybody knows Sitting Bull as the great Sioux Chief and warrior who kicked Custer and the 7th Cavalry in the ass, leading his tribes to victory at Little Bighorn in 1876. But very few people know Sitting Bull was a writer and a poet who adopted smoke signals as his own vertical grammar. His burning verses, for more than forty years, rose up as columns of smoke into the American skies to whisper an elevated message into the Gods’ ears.

Above: one of the first rising poems written by Sitting Bull with the vertical grammar of smoke signals: This mighty text says: “You came to this land and you called it America. But we were here before you, and we called it Anowarkowa. Go back to your land, sheepfuckers!” (restored photo: Yukon Territories, 1865)

(Above) another poem rising in the distance. It says: “You dig for oil, you dig for gold. You dig your own grave!” Nobody better than Sitting Bull can express the unquenchable greed of the white settlers. For this powerful poem Sitting Bull burnt almost six hundred trees, stolen from the Weyerhaeuser sawmill. Pink Cloud told us carbon footprint was not an issue, back then. And Sitting Bull was not much of an environmentalist (restored photo: Coal Valley, Illinois 1877).

Above: Pink Cloud, helped by his husband Big Cock, keeps the old tradition of smoke signals alive. “We send sacred hymns to our beloved ancestors” – she says. 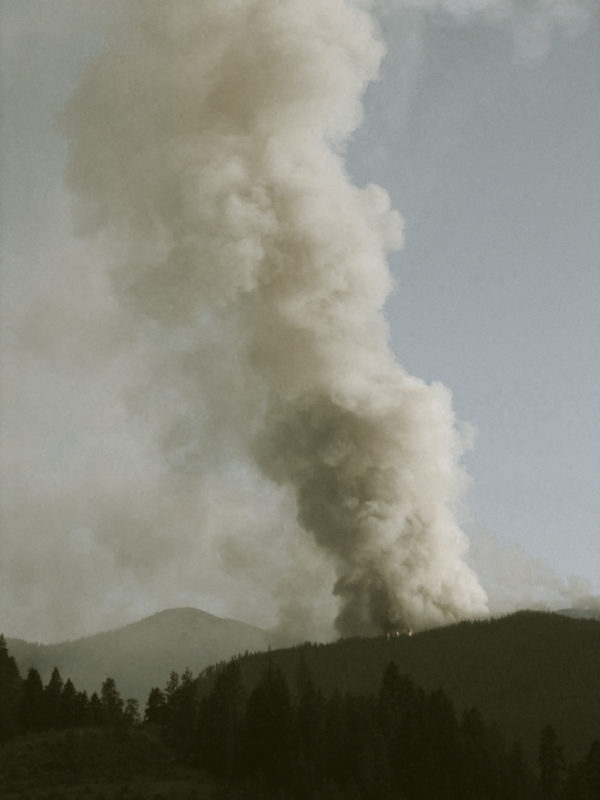 “Keep the rifles, keep the whisky, keep the money for yourself. We are poor but free and happy. We laugh at your skinny belongings, fat cowboys.” Also in these verses Sitting Bull demonstrates the force of his fuming, devastating language. (above: restored photo, taken in Montana, 1852)

“Fuck Peanut Butter! We eat Bear’s Fat.” This is one of the shortest poems by the Sioux Chief. Only a few pictures of his flighty literature survive to this day, and the photo above is the only one taken while Sitting Bull was actually writing. He didn’t have a studio – Pink Cloud explained us with a bright smile – his office was the world. (picture taken in Northern California, about 1877)

Above: Every now and then Sitting Bull opted for a more cryptic style. In this very large smoke ring (approximately 150 ft. in diameter) we can really appreciate his great handling of syntax. Pink Cloud told us it’s quite difficult to decipher this poem, but its message – most likely – was due to Sitting Bull’s shamanic nihilism.    (restored photo – Arizona, end of 1870). 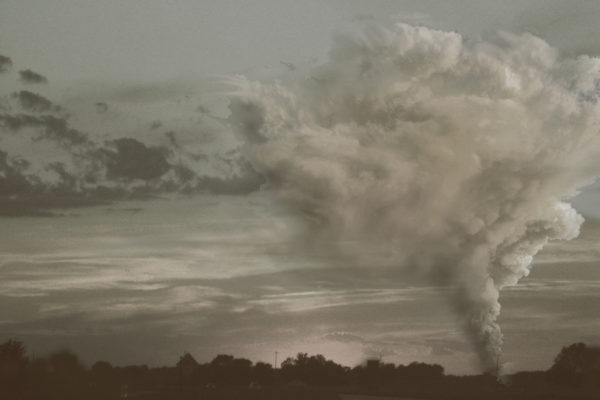 Above: Sitting Bull also composed after dusk. The smoke, in the evening’s cooler air, rises thicker and quicker. The text says: “I love my knife, I love my life, I love my wife”. This is one of the last poems the Chief threw to the wind. If it’s true that “Verba Volant”, Sitting Bull made them fly higher than anybody else. 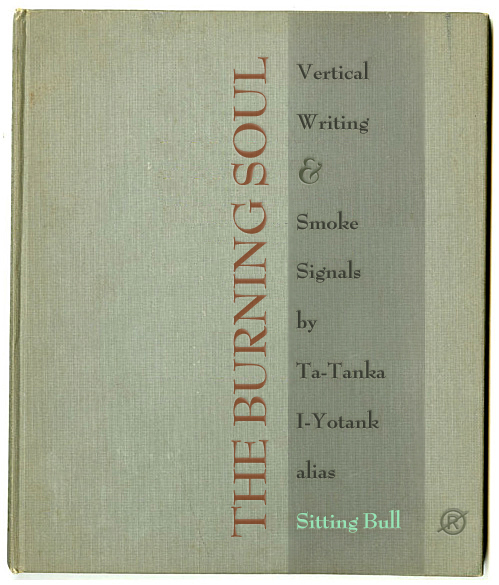 Above: one of the books the Brandpowder Team published as a tribute to Sitting Bull (his real name, Ta-Tanka I-Yotank, means Sitting Buffalo). The book bears a selection of rare photos of Vertical Poetry by the great Sioux Chief, plus several old documents about smoke signals’ culture among American Indians.

Below: another title by Brandpowder (battered after we left it under the pouring rain for two days). This book, beside the poetry part, will teach the reader how to master the challenging technique of smoke signals through the correct handling and burning of natural resources like wood, peat and unusual organic materials. There’s also a chapter dedicated to winds’ control, defense tips in case of arson, and a quite useful graph to help you keep air pollution under a reasonable level. 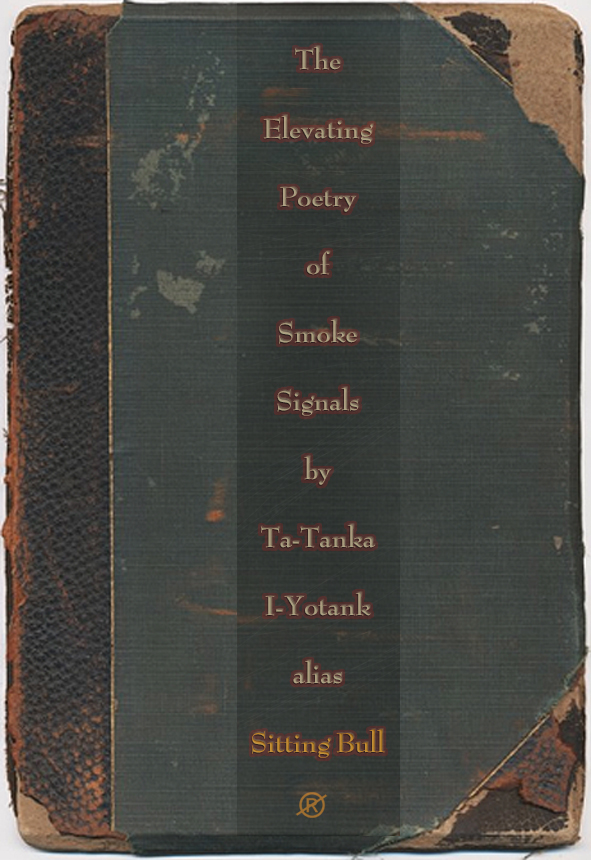 Below:  The central pages are made out of black tar, which is perfect for producing a convincing plume of thick smoke for your first outdoor experiments. 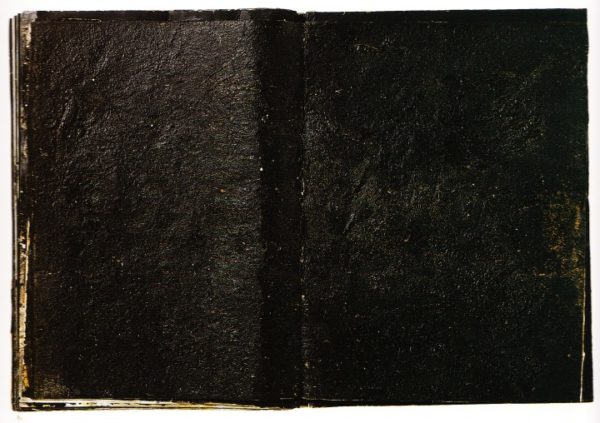 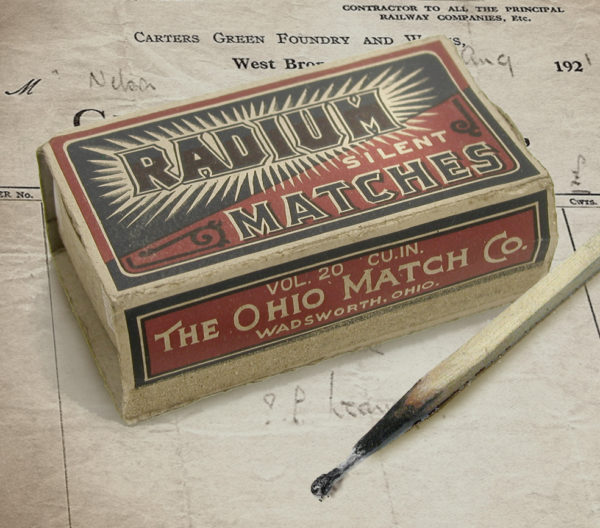 Sitting Bull never used a pen. His smoky writing always started from a flame. Pink Cloud showed us this match-box (above).  It belonged to his grandfather, Screaming Eagle, who happened to be one of the nephews of the Sioux Chief and also a Medicine Man. He told her many fascinating stories about Sitting Bull, when she was still very young.

Below: Screaming Eagle tried to put on paper some of the burning words of Sitting Bull; it’s thanks to his effort, if today we can appreciate the elevated poetry of the Great Sioux Chief. 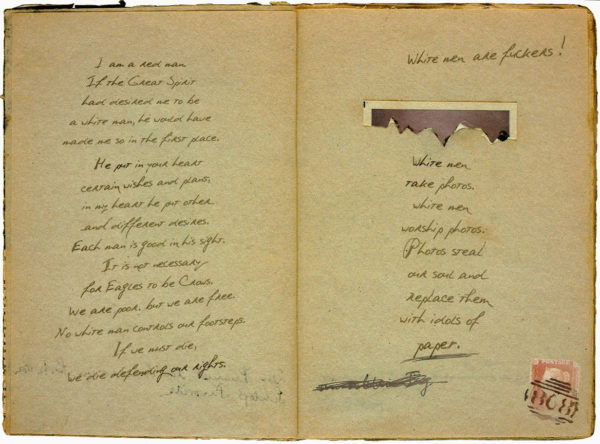 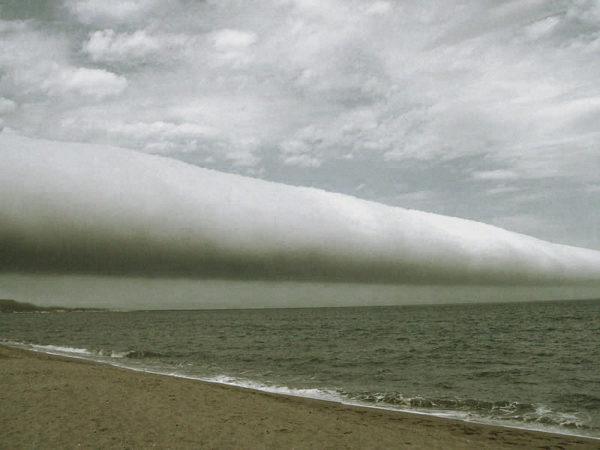 The day we left the Lower 48 to go back to Brandpowder’s headquarters in Alaska, we stopped by Lake Oahe, a few miles north of Fort Pierre National Grassland. It was bloody cold, that morning, and icy northern winds were blowing from Saskatchewan. We saw an incredible formation over the lake and, for a moment, we thought the Spirit of Sitting Bull wanted to write us a farewell. But we were told by a local ranger that was a phenomenon called Morning Glory. It happens when strong winds shape clouds, rolling them into long cigars. It was an outstanding view.

We wish to thank warmly Pink Cloud for her invaluable assistance and hard work in providing us with all the material and countless stories. Without her effort our two books on Sitting Bull’s poetry would haven’t been possible. A special thanks also to her husband Big Cock for showing us around and keeping the fire going ’till the end. 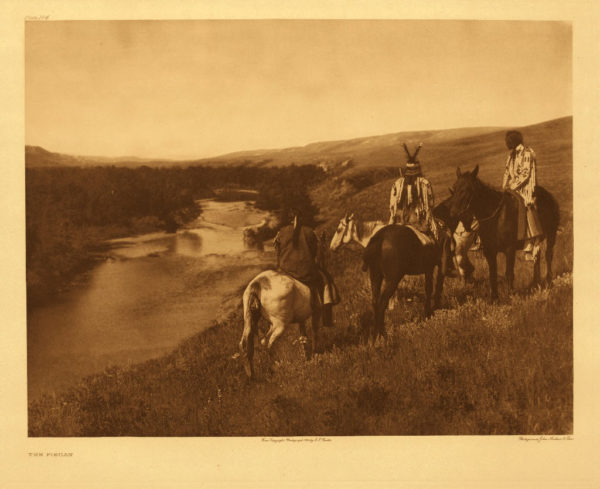 Thanks BT. Sitting bull was also know as Spitting bull from the old indian tradition of estinguishing a fireplace with a ‘zallon’. The rising smoke was dense and intense and the signal always telling the same :’Spitting Bull’s lungs much cleaner augh’.

We never heard about this extra ability. The American Indian story telling dips its spoon into a rich mythological soup and it’s quite difficult to separate the real from the unreal. The sacre from the prophane (and the propane). But Sitting Bull, we are sure, would have appreciate your sense of humour.

Thank you so much, Ink Blue Sky, for your comment. It gives our work a meaning.

Have a look at my page shutterfly *http://www.icemyphotos.com*

HI there:
I’d like to purchase the Sitting Bull books but they are not on Amazon. How do I do that.
Great books by the way–tremendous.
All the best
Philippe Mora

Dear Brandpowder Team
Fascinating.
Please be kind enough to let me know how to purchase a copy of this book.
Best
Philippe Mora

brandpowderreply
– In reply to: Philippe Mora

our apologies for our late reply and thank you for your patience.
We are afraid the book is out of print and hard to find. May we suggest the comprehensive “Sitting Bull” by S.D. Nelson?
You can find several sources on Lakota culture and poems. Abebooks.com is also a good source for your queries.
We hope to have provided a little help. Sitting Bull’s smoke signs are still raising above us, as a warning to our destructive culture. Our pace is too fast and we all should slow down to contemplate the world around us.